How Poor Service Turned Into Slut Shaming in Trinidad & Tobago 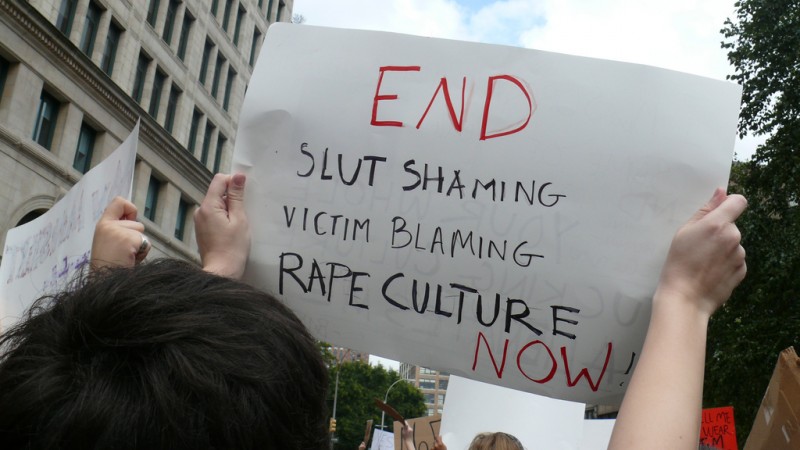 Women always seem to get the blame. Case in point: a female customer who was having trouble with her iPhone took it to a Trinidad-based company called “Bad Robot” for repairs. Months later, nude pictures of herself — allegedly lifted from her phone — appeared all over social media.

She complained, both to the store owner and in an online post.

According to the blog Square Peg (Round Hole), here's what happened after that:

Angry that you would publicly reveal the wrongdoing as you saw it, the owner then attacks you via social media and shares the pics for spite. Even worse, people following this increasingly public spectacle are now blaming you for daring to use your personal property as you chose. Instead of… oh, I don’t know… condemning the person who stole from you.

Of course, not everyone was adopting the “blame the victim” stance. Most notably, Anya Ayoung-Chee, a former Miss Trinidad and Tobago and Project Runway winner who had the first-hand experience of having a sex video stolen and made public after her computer went in for repairs (albeit not at the same company), was quick to condemn the owner of “Bad Robot” for how the debacle was handled:

I am utterly shocked by your slanderous and outrageous behaviour. I highly recommend you immediately stop what you are doing, recoil, reflect and better yourself. You are doing yourself absolutely no favours as a business owner or a person who I assume wishes to maintain respectable relationships with other people in your community. For my own reasons I have NEVER even publicly addressed my own similar situation, however I cannot stand by and watch this happen to another person. This abuse MUST stop.

Even if your company was not at fault for the initial crime, you are personally incriminating yourself now. Find a more intelligent and effective method to address your purported grouse.

To all the salacious social media cowards following along — liking, commenting, sharing — I implore you to recognize that you are complicit in this deplorable act of invading someone's privacy and damaging their character. Believe me, you would not want the table's [sic] turned.

The winner of the internet today is Anya Ayoung-Chee. Raucous applause!!!!! Just raucous!!!!!

The backlash may have prompted this “public apology” from the company's owner, Jeffrey Charles:

Recently a customer bought an issues to the management about some leaked nude photos and alluded it was done by one of the employees of the establishment. I indicated to the said customer that I will investigate the matter and get back to her as the employee in question in not in our employment anymore. To my surprise the next morning my phone is ringing off the hook and my inbox is fill with messages about the conduct of my store. I was then told that my store that I built from the ground up and put some many hours in to establish my brand was being dragged through the mud on social media.

I found this to be unfair as I had promise[d] to look into the matter. […] I lashed out at the customer in the same like manner on social media, which caused the matter to escalate further…

Charles said the employee claimed that he fixed the phone in full view of the customer, adding:

As everyone knows with the new iOS software iPhone requires a password. Her screen LCD was damage[d] and her entire phone was blackout [sic] so the only way to see the screen and enter the password was to change the screen, which was done in her presence. The question to be asked is at what point did the employee invade this customer[‘s] privacy? This incident occurred three months ago and it's unfair that Bad Robot[‘s] name is being dragged into dispute without any evidence of wrong doing.

‘No one is responsible for anyone else’s behavior’

To add fuel to the flame, mainstream media covered the story and interviewed local women's advocate Hazel Brown, who suggested that it was the woman's fault for not taking the necessary precautions to protect her images. Netizens were incredulous. Facebook user Rhoda Bharath said:

Hazel Brown slut shame the girl….I cyah make this shit up!
And they want a Ministry.
Dear Sweet Baby Jesus, I need a drink.
Soon she will say women does look for rape.

Let me be very clear: first of all, no one is responsible for anyone else’s behavior. Did the businessman have a right to get angry when he discovered that she had posted about the incident in relation to his company before (as he claims) he had a chance to investigate? Sure. Did that anger give him the right to compound the initial violation by posting the pics? Nope.

The situation had bloggers discussing the need for the implementation of the country's Cyber Crime Bill. The Eternal Pantomime blog went on to share practical online protection tips from the Trinidad and Tobago Police Service, saying:

Don’t fall for stupid guilt-tripping arguments whose only purpose is to make women feel ashamed for having sexual experiences and/or taping them. In the same breath, publicly posting and sharing your intimate moments are a No-No. That could get you – the sharer – into trouble as well. The owner/manager of that gadget repair company was relying on public naming and shaming and mob mentality to beat a woman into submission. Thankfully there were Trinis ready and willing to show him the error of his ways.

‘None of this would happen if women didn’t exist’

Square Peg further delved into the legality and ethics of the situation:

The victim (and yes, she is a victim) is a grown woman who has every right to use her personal property in any legal way she saw fit. Regardless of how you personally feel about it, her decision to take those pics was quite legal. What was quite possibly illegal (I’m not quite sure, given the state of limbo in which our cyber crime laws currently reside) and definitely morally despicable was the decision to steal her private photos and share them. And let me be clear here, everyone who has since shared them is equally guilty of violating her right to privacy.

Satirical website The Late O'Clock News couldn't resist getting a word in:

We have been warning women about their behaviour, and the consequences they attract. They take provocative pictures of themselves and complain when they get leaked. They wear revealing clothes, then complain when they attract unwanted attention. Well after countless hours of research and study, we have found that none of this would happen if women didn’t exist. By existing as a woman, by default you invite many ills into your life.