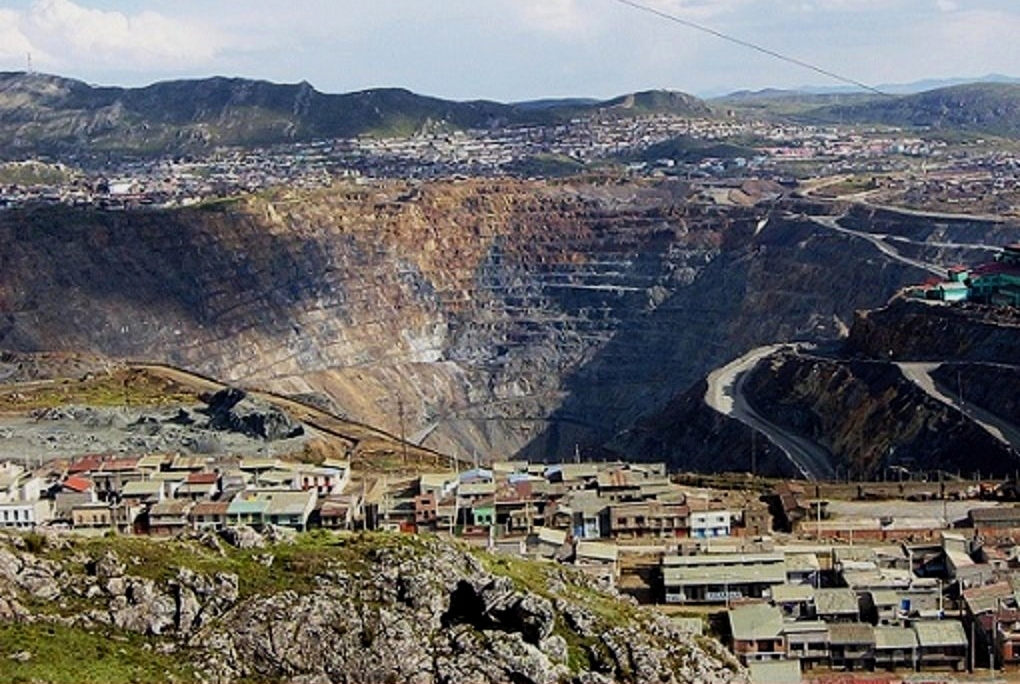 Cerro de Pasco, the city and the open pit mine. Image from La Última Reina (The Last Queen)'s Facebook page.

Post originally published in the blog Globalizado by Juan Arellano.

The region of Cerro de Pasco, in the central Andes of Peru, has traditionally been a mining area. This area is rich in mineral deposits that have been exploited since the 16th century, beginning in the colonial era. This is also where there are currently 14 mining sites operating at high production levels. Nevertheless, the wealth extracted from Pasco's land and its natural resources are not enjoyed by the majority of the region's inhabitants. In fact, statistics from last year show that between 2013 and 2014, Cerro de Pasco was the region that saw the sharpest rise in poverty in all of Peru.

Moreover, mining activities have apparently enjoyed little oversight, and for years have been contaminating the rivers and the land, creating a variety of environmental liabilities in the Pasco region. In the specific case of the city of Cerro de Pasco, the mining industry has both contaminated the local environment and created an open pit mine in the city center—one that continues to grow and engulf the city. 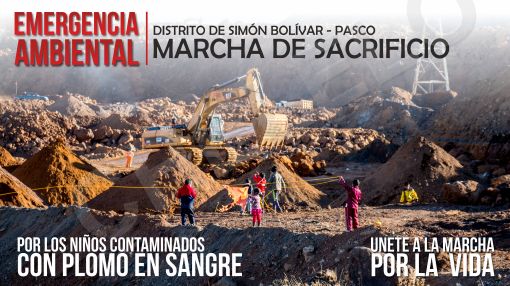 Image reads: Environmental emergency. March of Sacrifice. District of Simon Bolivar in Pasco. For the children poisoned with lead in their blood. Join the march for life. Image obtained from the blog Tomate Colectivo.

It's in this context that the population and authorities of the district of Simón Bolívar, in the city of Cerro de Pasco, approved a motion on September 5 to hold a “march of sacrifice” to the capital city, Lima, a distance of 296 kilometers, on September 17. The goal is to protest the central government's neglect of the 2,000 children poisoned with high levels of lead in their blood—a case that has gone on unresolved for four years.

On September 17, the march began, led by the mayor of the district of Simón Bolívar, Zumel Trujillo, who is also an engineer. Originally consisting of 58 marchers, significantly more people joined as the procession approached the town of Colquijirca in the south. On the 18th, they marched southeast around Lake Junín through the town of Ninacaca. On the 19th they passed through Carhuamayo, in the Junín region of the highlands, where they received support from the authorities and people in the area. On the 20th, they marched south through Ucco and also through the capital town of Junín.

On September 21 and 22, on their way south to the town of La Oroya, there was some friction with the police in the town of Paccha and at the entrance to La Oroya. On the 23rd, the police injured one of the marchers. By the end of the day, three more marchers were injured at the hands of the police. The incidents took place when protesters blocked the Central Highway (Carretera Central) (the route they were traveling) while resting.

No to the repression. The march of sacrifice continues vigorously.

On September 24, after staying the night in the mountain town of Morococha, the march crossed through Ticlio in the west into the province of Lima, one of the highest points on the Central Highway at 4,818 meters (15,807 feet) above sea level. On the 25th, they passed through Casapalca and Chicla to the southwest, arriving in the district of San Mateo on the 26th. On the 27th, they went through La Cascada and Corcona to the west, and on the 28th, they were already approaching Chosica and Chaclacayo, just outside Lima.

On September 29, the marchers crossed through the district of Ñaña. Near the district of Huaycán, new incidents with the police were reported. In the neighborhood of Santa Clara, already entering the capital city of Lima, there were more clashes that left two people injured. The Squad of 58, as the marchers now called themselves, arrived in Ate Vitarte, a district in Lima, in the late evening.

The ‘March of Sacrifice’ ended in a confrontation with the police ow.ly/SQx9o

On September 30, now in Lima, the representative for the marchers, Mayor and engineer Zumel Trujillo, was received by the Congressional Energy and Mining Commission (Comisión de Energía y Minas del Congreso). That night, the marchers camped out on Abancay Avenue in the heart of the capital city.

March of sacrifice from #Pasco blocks traffic in Lima ► bit.ly/1heUqX0

On October 1, the marchers walked through many streets of Lima, toward Plaza de Armas and Palacio de Gobierno. Nevertheless, their path was blocked several times by heavy police forces. Eventually, they were received on the floors of Congress, and later in the afternoon, the leaders of the march held a meeting in the office of Peru's Prime Minister. Once the meeting ended the next day in the early morning hours, the leadership reported back to the group of marchers about the details of the proceedings, later releasing a signed agreement from the meeting.

One of the key points agreed upon was that the Ministry of Health will medically examine the children affected by high levels of lead in their blood. Also, the Peruvian government will carry out a technical site survey of the location to build a clinic for heavy metals detoxification and a modern toxicology lab. In addition, a healthcare center will be constructed in the Paragsha neighborhood of Cerro de Pasco, and other project plans to build health care centers in more towns will be evaluated. On the environmental side, the government agreed to monitor the closure of areas with strip mining, tailings, and toxic pools that still await shutdown, and to neutralize water sources that have become acidic, oversee all relevant audits.

Minister Huaita highlighted the level of dialogue in negotiation between Cerro de Pasco and the executive office goo.gl/NVJI9v

A Decent Start, But More to Do

Lima media outlets covered the story of the march, and news of the poisoned children. Elizabeth Lino is the activist behind La Última Reyna (The Last Queen), a project aimed at giving visibility to these issues. According to Lino, “they succeeded in putting (the issue) on media and political agendas… almost all the channels covered it, even Telesur took note, but the problem is that more is said about the ‘children with lead’ and little is said about the environmental liabilities (toxic clean-up sites), which is what ultimately causes all of this.”

The grassroots media project Tomate Colectivo, documented a few moments of the march as it passed through Lima and interviewed one of the marchers. Here is the eyewitness account:

To view the video with English subtitles, click here.

Espacio abierto (Open Space), another alternative media collective, also covered the March of Sacrifice to Lima, writing, “It is clear to us that the maneuvers of the press, the media, and the State will not cease to delegitimize the stories, the demands, and the righteous struggle these fellow Peruvians have come here to show us. Nonetheless, we believe it is possible to set up other potential communication channels—true communication with no intermediaries.”

To view the video with English subtitles, click here.

Finally, César Sáenz Suárez writes in his blog about the perhaps-little-known aspects of the Pasqueño issues, such as how the population has less access to water rights than the mining industry and the levels of contamination produced by the negligent mining production, among other concerns:

Living conditions are tough. It's unbelievable how this place adds so much to the national economy and yet its inhabitants lack basic services. They have used an artificial pond as a landfill. They use this space like a sewer, even though people live all around. This place is a hotspot for high-risk infections. The inhabitants of this place continue to receive only indifference from the state and its citizenry. Their demands require attention and solutions. […] One cannot remain apathetic to the health of children.