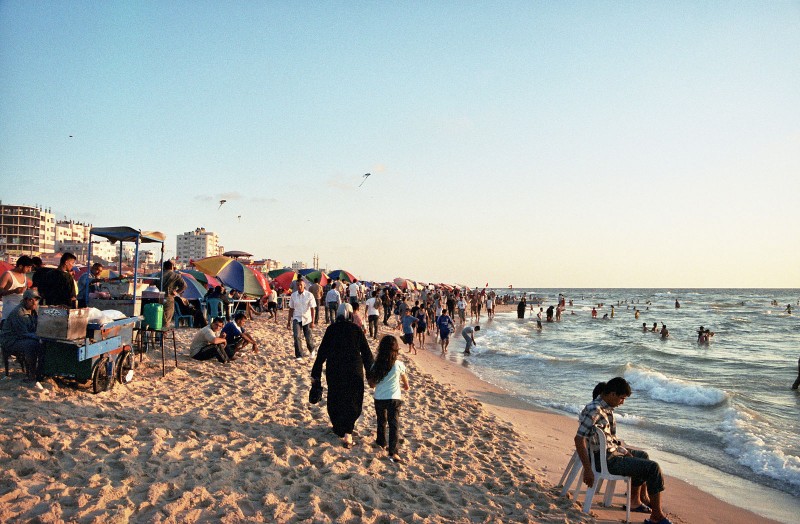 Gaza Beach. This work has been released into the public domain by its author, Gus at Wikipedia.

To say that both technology and communication have been experiencing a steady advancement until the past few years is something of an understatement. The world went from slowly becoming one village, thanks to the World Wide Web, to becoming one home, thanks to social media. Our era will probably go down in history with a single headline—“Social Media”—because it has been a game changer. In the past we aimed to achieve perfection in work or love or elsewhere, but recently our main goal in life has become to go viral and hit a home run.

People nowadays are using social media for everything. Some are utilizing it in smart ways, while others are merely creating buzz for their blunders. For so many new businesses and startups, social media is the sole marketing tool.

But perhaps arguably, the most important role social media has played in recent times is that of “citizen journalism”.

Back in 2007, I slowly started to spread my presence across social media in the hope of joining the hype, and also to and stop my friends from nagging me about it. It was all fun and games, until the first Israeli assault on Gaza in December of 2008. At that point I went from using Facebook to play Farmville (don’t judge me, I was in my early 20s back then) to creating a breaking news hub that began attracting international interest. Earlier in that same year I had started Gaza’s first English-language blog, and that also helped my voice reach further horizons. But I was still only a social media toddler taking my first steps.

Then came the Mavi Marmara incident, when Israel attacked a ship while that was on its way to Gaza to attempt to break the Israeli siege. Many activists were killed and injured. As a journalist, I was receiving the information updates beforehand for use in my reporting. Ergo, I decided to put my Twitter account—which I rarely used back then—to good use. I started pushing all the exclusive info I was getting into the cybersphere, in real time. In other words, I was “live tweeting”, but that term didn’t exist back then. People started noticing what I was doing. And my pool of followers began expanding.

Then in 2011 the Arab world was hit with a series of unprecedented “revolutions”. It started in Tunisia and slowly crept into Egypt, Libya, Syria and so on. As a Palestinian, living under occupation and siege, aching for freedom, I had to be a part of the regional conversations. So I became an avid user of social media. I was on all platforms, all the time, despite the power outages that have plagued Gaza for years now. I had to find ways to stay updated and alert, so I started looking into ways of remaining connected during power outages, which helped me a great deal during the rest of the Israeli assaults on Gaza and on Palestine in general.

In 2012, the United Nations selected me to participate in their annual training of Palestinian Journalists. It was the first year they stopped focusing on TV and radio, and started focusing more on digital and social media. My work took me all the way to New York, which was a dream come true. Given my experience as a journalist in Gaza and a social media “star” in my country, it was only natural for me to pick “Social Media and Journalism Safety” as the topic for my training project. I was given access to the headquarters of luminaries in the world of news and social media such as Twitter, Google, BBC, Reuters and others. It was like coming full circle, an experience of a lifetime that left me with affirmation and knowledge. Social media had paid off.

When the second Israeli assault on Gaza happened in 2012, I was still in the US doing my training. Gaza was being heavily bombed and my family was in danger. But I had the chance to visit places like the US Congress, the State Department, BBC, AL Jazeera English, and everywhere I went, I delivered the voice of Gaza, including during a live interview on the Huffington Post. Many people already knew who I was and had been following me on social media, so I was well received, and I made sure Gaza was as well.

Social media also helped me keep in touch with my family in Gaza, and also stay updated about everything that was happening there and amplify the news on Twitter.

In 2014 Israel launched its most vicious assault against Gaza yet. I secured my ability to stay connected and keep reporting by making sure I had a generator, a battery for the router, extra batteries for my mobile, access to nearby WiFi connections and enough mobile phone credit to tweet by SMS. I tweeted through bombings, fear, desperation and danger. It was all quite raw and uncensored, and it was heartwarming to see that a huge percentage of Gazan youth were inspired to do the same. We were being featured on radio, TV news channels, news websites and being contacted by independent journalists. Major news agencies were mentioning us as the source of breaking news and celebrities mentioned us and reached out to send their support for Palestine. Our voices were heard everywhere, united under the tent of citizen journalism.

The natural progression after this was for us to be threatened, attacked in the cyber world and pushed to be silenced. My email was hacked, my Twitter account was suspended after hackers tried to access it, and my Facebook account was flooded with posts spouting hatred and private messages from people threatening to kill me and my family if I didn't “shut up”. But I didn’t stop, because, as I learned from my training at the UN, sometimes a tweet can change the world.

Now, as Palestine experiences what some are calling the Third Intifada, citizen journalism is again on the frontlines as a primary source of news for the public and for media agencies. Truth is the only propaganda-buster.

Social media is a double-edged sword. It can be the vehicle for bullying that pushes someone to commit suicide; it can also save someone’s life by alerting others to their plight. Which edge would you rather use? Social media can either make you or break you. I urge you to choose wisely.