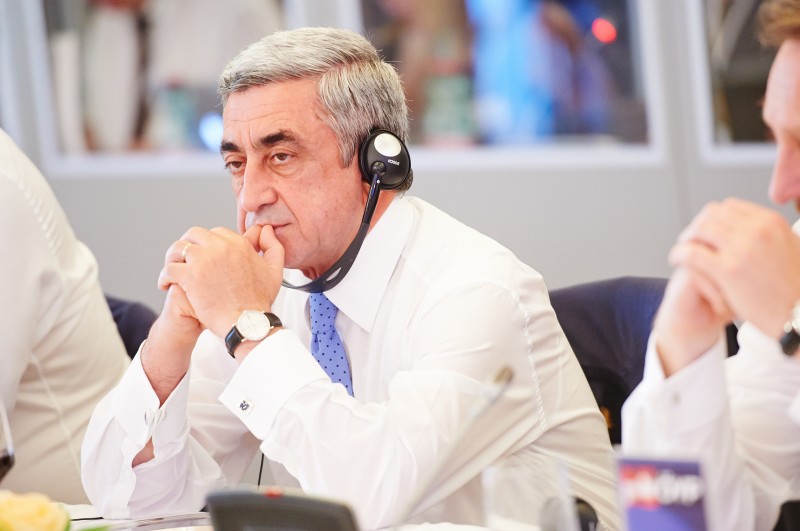 Armenia's President Serzh Sargsyan has seen his country take so much trolling from his counterpart in Azerbaijan on Twitter, it was about time that he carved out a space for himself on social media and came to its defence. But since Sargsyan, unlike his fiercest political rival, is not the tweeting type, it fell on a parody account to counter-troll and big up Armenia on the networks.

Azerbaijani President Ilham Aliev's official Twitter account is one of the most entertaining social media accounts in the former Soviet region. Despite a lack of pictures, its vulgar boasts and misunderstanding of the tweet concept (few of Aliev's communications fit into the 140 character limit) make it a worthy competitor to Chechnyan President Ramzan Kadyrov's much-lauded Instagram.

It would be an understatement to say that Armenia and Azerbaijan do not like each other much. The two countries were already embroiled in a bitter war over the disputed territory of Nagorno-Karabakh before they even achieved independence from the Soviet Union in 1991.

The war — which saw Baku and Yerevan trade accusations of ethnic cleansing as thousands died and over a million were displaced — lasted into the mid-1990s and has threatened to re-erupt ever since. Patron Russia, rather than play peacemaker in the traditional sense, has played both sides of the conflict, selling arms to Azerbaijan while maintaining a military base in Armenia.

One indicator of bilateral tensions is Aliev's Twitter, which boils over with anti-Armenia rage fairly regularly.

Azerbaijan, a victim of terrorism, has always been involved in the fight against international terrorism.

Armenian terrorist organizations carried out more than 30 terrorist attacks on Azerbaijan`s territory. As a (cont) http://t.co/5ebr2Zl0Up

Terrorist attacks against Azerbaijan were part of the policy of occupation of Azerbaijani lands, which was (cont) http://t.co/tNIug4ml5N

Armenian occupation of Azerbaijani territories represents a violation not only of international law but also of all human norms.

Now the anonymous controllers of a faux Sargsyan account are firing back:

We hear warmongering every day, every day we hear threats and attempts to scare us… We don't want war and never wanted, but…..continued

…..during Karabakh war we had to defend our Motherland. If the time comes again, this time our blow will be final and deadly. #Armenia

Most provocatively, the account tweeted a picture of ‘Beautiful Armenia’, which included the southeastern territory of Nagorno-Karabakh Azerbaijan considers its own.

But amid rising military confrontations on the Azeri-Armenian border, the online rhetoric of both @Armenia_Pres and @presidentaz will be well worth watching.