The Violent Life and Afterlife of Venezuela’s Slums 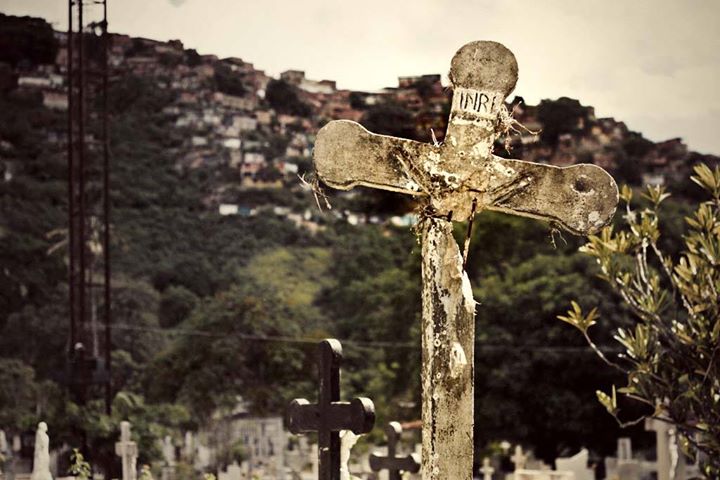 In Venezuelan slums, criminals (or malandros, as they're popularly known) are often thought of as the epitome of either success or corruption. They live at the margins of society and operate within complex systems that create a sense of identity. In this context, their funerals appear to be a rite of passage that forms part of this identity. These ceremonies are the product of Venezuela's tragic culture of violence—a result of the crime and murder that's become routine in many parts of the country.

In these funerals, the deceased is honored by their peers with music and rhythm, cries, liquor, and gunshots into the air. Some of these funerals are shared on social media, where participants show the beginning and sometimes the entirety of the procession.

How does violence, specially urban violence, penetrate people's rites of passage? In the case of Venezuela, there have been various ways it happens. Mourners engage whole subcultures and include practices and symbols born in the country's unfortunately frequent assassinations.

According to the Venezuelan Observatory of Violence, homicides have been rising at an alarming rate for nearly three decades. The increase has been so intense that murder is now an important component of Venezuelan modern history. A great number of these killings occur in the country's poorest, most disadvantaged neighborhoods, where “criminal rituals” are often strongest.

The Venezuelan term malandro has transformed in recent decades. Today's “new criminals” have new traits. For example, they go into the world of crime before reaching adolescence and are viewed as “machines” that are praised with each demonstration of cruelty.

In popular myth, these criminals are typically divided into two archetypes: the heroes and the villains. Thanks to the power of guns, combined with a propensity for violence, many of these outlaws have managed to become some of the most respected figures of their communities.

In the YouTube video below, shared on the channel Voces de la muerte (Voices of Death), you can see the farewell reception that occurs at criminals’ funerals. The dead is accompanied by numerous motorcycles in an atmosphere that deafens the pain of loved ones with gunshots. Some people show off their guns and begin, still standing in the crowd, a special routine where everyone in the group takes turns firing their weapon several times.

On the way to the cemetery, the numerous motorcycles that make up these funeral processions tend to block traffic, while performing dangerous pirouettes and, often, robbing bystanders. In another video shared on the YouTube channel of Samuel Jackson (no relation to the American actor), you can see a combination of mourning and celebration. Those in attendance bring gifts of liquor and spray booze from their mouths on the deceased's urn. Music plays at top volume and some people improvise dance moves. Usually, these reunions take place in the neighborhood of the deceased. From there, the urn is transported to the cemetery, but not before being carried on the shoulders of family and friends.

This way of sending off the malandros in Venezuela's neighborhoods is neither new nor uniquely Venezuelan. Thanks to social media, however, we now know just how many guns flow through the country's streets virtually unchecked. On Nelson R Izarza‘s Youtube channel, it's possible to see the funeral of a supposed pran (the head of a criminal group).

In the video below, they repeat the same ritual, complete with motorcycles, liquor, and music. All the gunfire steals the show, however.

Not all funerals and deaths are anonymous. Some videos’ titles carry the first or the surname of the deceased. Some videos are well-known in different social circles. This is the case of the funeral of ex-convict Luidig Ochoa, who created the popular Web-based series retelling life in Venezuela's prisons, as well as and the lives of ex-prisoners after jail.

Views from the outside

For many people living in the capital, these funerals are unthinkable and terrifying. Many citizens frown on the proliferation of firearms and the nervousness their uncontrolled use spreads among the public. When one of these funerals hits the streets in Venezuela, citizens’ alerts on Twitter follow close behind, hoping to keep bystanders off the streets and away from the dangers these celebrations visit on innocent bystanders.

Atention. High-ranking malandro funeral taking place at the Cafetal Boulevard [a neighberhood at the East of the capital, Caracas]. They're blocking the road. Danger. #Cafetal #Neighbor

It seems that the heavy gunshots taking place since dawn in the center of CARACAS, are part of a malandro‘s funeral.

The solidarity and tributes shown in these videos demonstrate the serious problems of armed gangs, and they also highlight the disturbing admiration many of these criminal enjoy among the public. Segments of the population have been marginalized and excluded for decades. Today, people in these groups seem to have realized that they can rise fast in society and become sensations if they turn to violence. As so many young people choose a life of crime for these reasons, others fear that criminals will become to poor communities idealized and romanticized as heroes.

Venezuelans turning to crime or celebrating the exploits of those who do are hardly lunatics, of course. Poverty, social opportunities, and a sad medley of other obstacles make violence something very different for the people living in Venezuela's slums. To the people outside the ghettos, it's easy to demonize such cultures and subcultures. Bridging this gap, however, is another thing altogether.