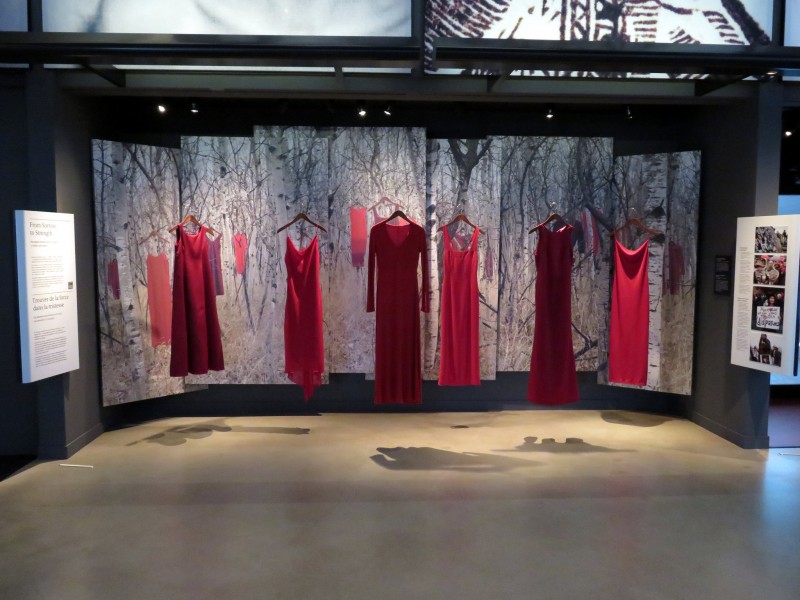 REDress Project installation: At the Canadian Museum of Human Rights, a response to over 1,000 missing and murdered aboriginal women. Photo by Flickr user Sean_Marshall. CC BY-NC 2.0

Red, empty dresses that represent death and absence. They hang loosely and lifelessly, as if waiting to be worn by their symbolic owners — Canada's missing Aboriginal women.

The garments are part of the REDress Project, an installation art project seeking to draw attention to the injustice. About 1,200 Aboriginal women have been murdered or gone missing since 1980, according to the Royal Canadian Mounted Police. While Aboriginal women make up only 4.3% of the Canadian population, Aboriginal female murder victims represented about 16% of all female murders across Canada.

On 4 October 2015, Jamie Black, the creator of the project, asked women to donate a red dress, hang one outside their house or even wear one on that day. On Twitter, under the hashtag  #REDressProject, citizens around Canada collected haunting images of the dresses as a reminder of all the Aboriginal Canadian women who have been robbed of their lives.

On my way home I noticed a red dress on a home a few doors over. Ave Lajoie #Outremont #MMIW #REDressProject #elxn42 pic.twitter.com/Efm3oio49s

Black, herself a member of the indigenous Métis community, launched the REDress Project in 2010, collaborating with the University of Winnipeg’s Institute for Women’s and Gender Studies at the time to display about 100 red dresses indoors and outdoors around campus. All the dresses were donations by people from all around the country and from different cultures.

She offered insight into what motivated her to begin the project in an interview with the portal Indigenous Foundations Arts:

The REDress Project was inspired by my work as a teacher in Opaskawayak Cree Nation, also known as The Pas, where Helen Betty Osborne was brutally murdered while walking home one night by two young men who were not charged or sentenced until years later. And by a group of 300 women in Colombia who had the courage to create a moving 4 hour performance piece to protest their missing and murdered loved ones in the main square in Bogota. By a female Aboriginal scholar at a Canadian Studies conference in Germany standing up to remind everyone of Canada’s colonial past and present.

Despite the staggering numbers of violence against Aboriginal women in Canada, many are still unaware of the ongoing tragedy. Linda Nothing, who helped in organising the project's installation in Calgary, explained in an interview to Metro News:

The image itself can speak to a lot of people. If they aren’t aware of the issue they are often shocked and surprised that it’s happening in Canada because there is a lot of under education and miss-education about indigenous issues here.

See video of the project from 2011 below:

The REDress Project is currently displayed at The Acadia University Art Gallery until November 29. You can follow the project's updates on its official Facebook page.