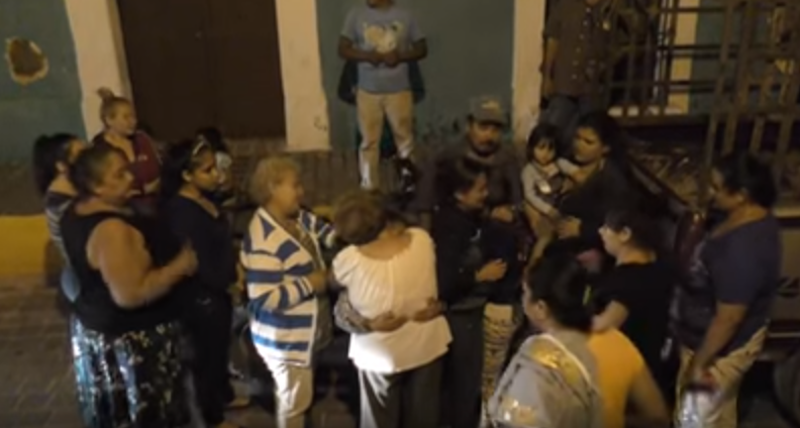 According to the National Demographic Dynamics Poll, 6.4 percent of the migrant population in Mexico (approximately 236,800 persons) moved from their homes because of violence. Screenshot from a video about the displaced published by local outlet El Debate (The Debate).

Reports of a looming humanitarian crisis are emerging from the mountain region where Sinaloa, Durango, and Chihuaha meet in Norhtwest Mexico. They come after military operations lead by the Mexican marines to allegedly recapture the most wanted man in the country, drug dealer Joaquín “El Chapo” Guzmán.

The area is informally known as the Golden Triangle [1] due to the active drug trade in its hard-to-access towns, hidden in the foliage and nestled between the mountains of the Sierra Madre Occidental [2]. Since October 14, 2015 the army has engaged in sustained clashes with an armed group supposedly protecting Guzmán, who ran away from [3] a maximum security prison in the Highlands at the heart of the country last July.

The operation took place a week ago in Tamazula, Durango. It was lead by the Special Operations Unit (Unopes) of the 27 Infantry Marine and Special Forces Batallion (FES) from the High General Command of Mexico City.

The navy operation started after intercepted phone calls, emails, and text messages indicated movement and meeting points for the Sinaloa cartel chiefs, who were set to gather in a mountain area between Sinaloa and Durango. They even believed that Guzmán Loera was going to meet with his lieutenant in the Cartel, Ismael “El Mayo” Zambada.

After the operation, some media (including the one quoted above) claimed that the drug lord sustained injuries [5] to his face and one of his lower limbs. At the same time, few agencies have reported on the consequences of the military action for the civilian population, who besides living in a remote area face the unleashed violence of the armed forces (from the State) and the gangster groups.

The Human Cost of The War on Drugs

Noroeste [6] (a regional journal) produced an early report soon after the confrontation on the state of the displaced people who took shelter in Cosalá, one of the 18 municipalities that form Sinaloa:

According to the major of Cosalá, Samuel Lizárraga Valverde, the local authorities have counted—using the data from the people who have asked for help—close to 600 refugees after the forced displacement of their communities since the population exodus from the mountains started last week.

Organizations such as Article 19 and the Human Rights Defense Commission of Sinaloa have defined the situation in Cosalá as a “humanitarian crisis” and said it should be handled with urgency.

The following video by El Debate shows some of the affected persons after the operation and hightlights the testimony of one of them:

They didn't care there were children […] when we least expected the helicopter [appeared]… and we told each other that it was just passing by, as always, when [suddenly] it turned back and started to shoot a rain of bullets.

The actions of the State, allegedly aimed at recapturing Guzmán, emerged in the media a few days after journalist Carlos Loret de Mola shared the audio and video [7] of the moments before and after the drug lord escaped. The material shows the prison guards searching for Guzmán outside his cell. Minutes after noticing he isn't there, they start searching underneath the army bed in which he slept, all without activating the contingency protocols in case of a breakout. In his opinion piece, published by El Universal, León Krauze [8] said that the video is evidence of the seeming negligence and added that “México is a joke to the world. It is maybe our biggest shame in at least 20 years.”

The damage suffered by the population as a consequence of the clashes has also been reported by a handful of international media, such as AFP and MSN, which published a report [9] on the events, putting the spotlight on the citizens whose homes and possessions have been shot to pieces and even set on fire. The international coverage also mentions the disappearance of at least eight people since the State's forces first opened fired against civilian houses.

A few months ago, the blog Estado Mayor [10] republished a piece with the transcript of a speech given by the specialist Brenda Pérez in a displaced people forum, where she shared some numbers that expose the size of the problem around the country:

She remembered that the Demographic Dynamic National Poll says that 6.4 percent of the migrant population of the country changed its place of residence due to delinquency. That's about 236,800 persons.

Also the last Victims National Poll by INEGI exposes that 1.3 percent of the people claim some member of their family moved because of violence. That is close to a million and a half people.

In a strict sense, the internally displaced persons—people who have left their homes behind because of an armed conflict—are entitled to humanitarian help according to human rights law, says the International Red Cross Committee [11]. However, that doesn't mean that those who have been displaced in Mexico have effectively received the aid that the human rights standards warrant, as it has been rightly pointed out by Insight Crime in a piece written by Kyra Gurney [12].

The issue of internal displacement is not endemic to the Golden Triangle area. Guerrero and Michoacán in Souhteast Mexico are other states where people have had to abandon their homes, leaving behind whole “ghost towns [13]” given the government's war against organized crime. [14]