Drowning in Refuse, Lebanon's Capital Is Now Zigzagged by ‘Rivers of Garbage’ 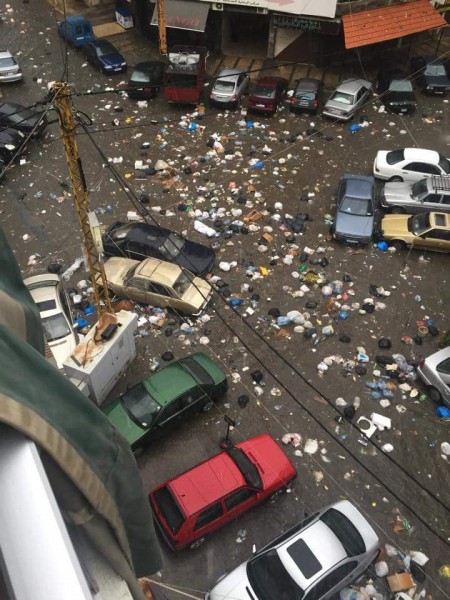 “Rivers of garbage” zigzag the Lebanese capital Beirut after the first winter rains. Photo credit: You Stink Page on Facebook

It rained in Lebanon, and Beirut's rubbish, which has been pilling up alongside roads for months, turned the capital's roads into “rivers of garbage.” The mounting rubbish, which activists have been protesting against for months, clogged up the city's drainage system, and fears of a cholera epidemic don't seem unrealistic.

On the You Stink campaign page on Facebook, activists warn of a cholera outbreak:

What will we tell our children tomorrow? That we are the generation which witnessed the flood of rubbish? That we are the generation which saw cholera outbreaks? And when they ask us why that happened, what do we tell them? Do we tell them we are sorry because we were occupied with the problems of politicians with each other after they convinced us that they are our problems and did not allow us to unite? What do we tell them? That a number of young men and women took to the streets and we did all we could to stop them?

The secular You Stink, or Tol3et Re7atkom movement, started a wave of protests in August which attracted thousands of Lebanese from all walks to life to protest against the trash crisis, which soon expanded to include a broader range of demands as other groups joined the demonstration bandwagon. It kicked off calling for sustainable solutions to the waste problem, and got people on the streets, but the situation quickly escalated beyond trash towards addressing larger problems related to corruption within the current government.

From the primary concern of protesting against the officials’ mishandling of the refuse problem following the closure of the country's largest landfill in July, protesters called for the government's resignation, an end to corruption and fresh parliamentary elections, among other demands. Lebanon, already suffering from a poor infrastructure and daily electricity cuts, has had no president for over a year. In 2009, its parliament extended its term until 2017, with no elections, citing instability as a reason.

So what exactly happens when it starts to rain? Heavy rainstorms will “cause the garbage to disintegrate into the soil reaching underground water reserves such as natural wells and fossil water (non-renewable)”, which means that diluted garbage would “sink into the soil, spreading downwards and outwards in a characteristic brush-stroke shape known as a plume, contaminating soil and water as it moved”.

– Landfills contaminate the air that we are breathing with various toxic substances.
– Contaminated water could lead to the widespread of several diseases such as Cholera, Typhoid, Dysentery and Dengue Fever. Add to that typhoid fever, food poisoning, gastroenteritis, and enteric fever.
– Populations exposed to untreated chemicals witness an increase in cancer rates.

He also shares this photography post, showing photographs to roads with overflowing rivers of garbage.

heavy rainstorms [..] will cause the garbage to disintegrate into the soil reaching underground water reserves such as natural wells and fossil water (non-renewable). These reserves serve as a main source of water for a very big percentage of Lebanon’s population and with all the contaminants seeping into them, we are bound to get our share of this unexplainable pollution in our drinking, cleaning and irrigation water.

On social media, bloggers were quick to share videos and photographs of the crisis, they have spent months warning people about.

Lebanese blogger and Global Voices contributor Joey Ayoub shares this video showing a “river of garbage” winding itself where a road is:

This is #Lebanon now. As we warned months ago, this was bound to happen. Video from the #طلعت_ريحتكم page. pic.twitter.com/yEWtypZudY

Garbage in #Lebanon is a concrete exmple that cant b ignored by any1, it represents: the corruption, no election, no work, no accountability

The traditional ‘running of the garbage bags’ festival in Lebanon. A highlight for tourists, locals alike pic.twitter.com/1pFvkkgVT6 v @LeNajib