Ukraine Goes to the Polls In Local Elections, But Not Everyone Gets a Vote 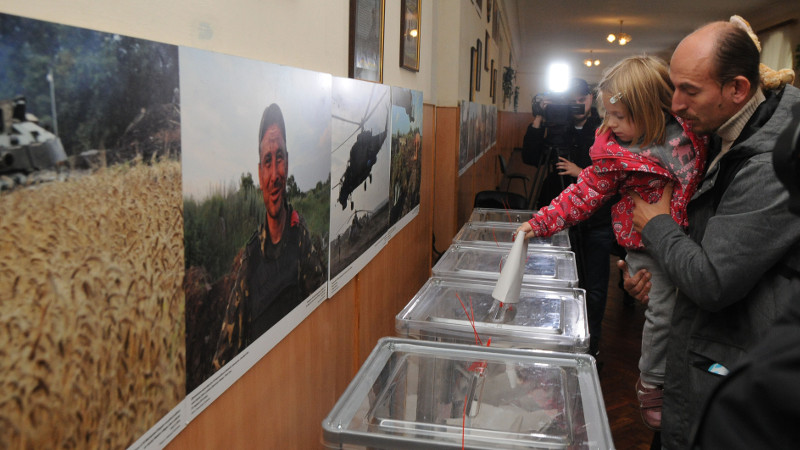 Voting in local elections at a polling station in Kiev, on October 25, 2015. Image by Alexey_Ivanov from Demotix.

Ukraine held country-wide local elections on Sunday, October 25, with many new and old faces competing for positions of 10,000 mayors and 160,000 members of regional and local councils. The Ukrainian social media sphere has been abuzz with tracking voter turnout, election violations, and exit poll results, using the hashtags #elect_ua and #вибори2015 (#elections2015). But some citizens, who were left without an opportunity to vote, have also made their voice—and disappointment—heard on the Internet.

Voting by the numbers

The October 25 elections are largely seen as a test for the post-Euromaidan Ukrainian political environment. If they are transparent and fair, observers say, this bodes well for the level of trust the international community will put in Ukraine as it continues to battle economic troubles and solicit global support for its struggle with Russian and pro-Russian interference in eastern Ukraine. While many commentators have pitched the competition in these local elections as pro-European vs. pro-Russian, it ultimately matters less which candidates win, and more whether the election process itself will be recognized as legitimate and transparent.

A total of 132 political parties are participating in the elections around Ukraine, with 82 Ukrainian and 14 international civic and non-profit groups observing the election process. The international organizations alone have sent 1500 observers to various regions of the country to keep an eye on the voting.

Online coverage of the elections has included both national marathons and local live blogs.

Given their decisive role, the turnout for the elections was fairly decent overall, and in some regions the levels were higher than previously anticipated. Overall, as of 8:00 pm on October 25, the Opora network reported an overall figure of 46.5 percent.

Many were disappointed with voter activity levels. Sasha Borovik, one of the leading candidates for the post of Odesa mayor, tweeted about his feelings.

Quite low voter turnout. According to our data, by 5pm there were no more than 35%. The youth is not active at all. This is an utter shame.

As in previous elections, civic activists from Opora maintained a crowdmap of election violations, collating and curating reports from observers and regular voters from around Ukraine. As of 11:00 pm Kyiv time on Sunday, the Opora map recorded 1093 violations of various kinds, with cases of illegal campaigning accounting for about half of them (542 reports). 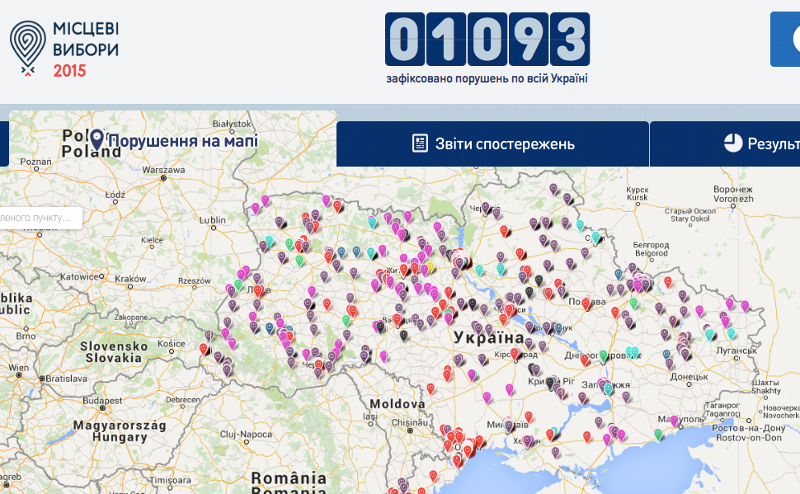 A screenshot of the Opora crowdmap at around 11pm Kyiv time on October 25, 2015.

While some of the election-related issues were organizational troubles like polling stations that opened late, there were some significant violations, including fake ballots and voter fraud using the so-called “kosynka” (“scarf”) method, wherein groups of voters wearing a special ribbon (“kosynka”) were given ballots without showing their ID or signing their name in the voter roster.

In the town of Vyshneve in Kyiv region, voters were offered 300UAH ($13) to cast their votes for one of the local mayoral candidates and asked to take a photo of their ballots with a mark near the “correct” name. Similar scenes were spotted in the western Ukrainian town of Uzhhorod, where some voters were also caught using their phones to capture their voting results.

Ukrainian election law forbids campaigning for any party or candidate on election day and the day before, but in the southern town of Odesa local mayor candidate Darth Vader and fellow supporter Chewbacca were detained by local patrol police for campaigning near one of the polling stations.

The elections are cancelled?

Much of the day's election reporting was centered around the towns of Mariupol and Krasnoarmiysk, where the voting was disrupted and the elections ultimately cancelled until a further date.

In Mariupol, a town on the frontline in Donetsk region, the members of the municipal territorial electoral committee decided they wouldn't accept the voting ballots printed at a local printer's after a incomplete and unsealed pack with 22 ballots was found in the print shop.

Local elections in Mariupol are likely not to happen: territorial election commission did not accept the ballots https://t.co/iGdAoSn6UE

The decision caused quite a stir, as the local electoral committee asked to postpone the election date. The head of Ukraine's Central Election Committee Mykhailo Okhendovsky, said the local electoral committee had likely violated the electoral law by “obstructing the voting process” and asked the Interior Ministry to conduct a full investigation into the matter. The election in Mariupol could be rescheduled to as late as November 15, 2015, as suggested by some of the political parties.

In a similar case in Krasnoarmiysk, also in Donetsk region, the local court disputed the choice of the local printer chosen by the electoral committee to print the ballots. As a result of the court decision, the majority of the members of the local electoral committee voted to recognize the ballots as invalid and to prevent them from being distributed at the polling stations. Though the decision was later disputed, the voters in Krasnoarmiysk weren't able to cast their votes.

Left without a vote

Mariupol and Krasnoarmiysk weren't the only parts of Ukraine where local elections didn't take place. Election-less areas also included Crimea, currenty annexed and occupied by Russia, and the parts of Donetsk and Luhansk regions currently under control of pro-Russian militants from self-proclaimed Donetsk and Luhansk People's Republics.

Another large group of Ukrainian citizens denied their right to vote were the IDPs (Internally Displaced Persons)—refugees from the conflict zone in eastern Ukraine. According to the Donetsk chapter of the Voters Committee of Ukraine, 2 216 307 internally displaced individuals were not able to exercise their voting rights on October 25. Another 1 872 743 voters currently live in occupied territory, where voting was impossible.

Current Ukrainian electoral law does not provide for a situation where internally displaced citizens can exercise their right to vote regardless of their location within the country. A more progressive version of the law accounting for current needs has been stalled in a parliamentary committee, never going up for a vote. Experts note that this is largely due to lack of political will and say that the only way IDP voters can dispute the current predicament is through court.

In the run up to the elections activists, many of them IDPs, launched a striking photo campaign online, showing internally displaced citizens posing with the names of their hometowns under a slogan “Registration that silences. IDPs don't get to vote.”

IDPs—internally displaced persons. Citizens of Ukraine, who were stripped of their right to vote, but have yet to be silenced!

While the final results are being counted and will show how many new politicians will come to usher change and fight corruption, and how many familiar faces will continue to play the same old game, these local elections are likely to leave a bitter taste for those who didn't get to cast their vote, no matter how transparent and fair the election process.