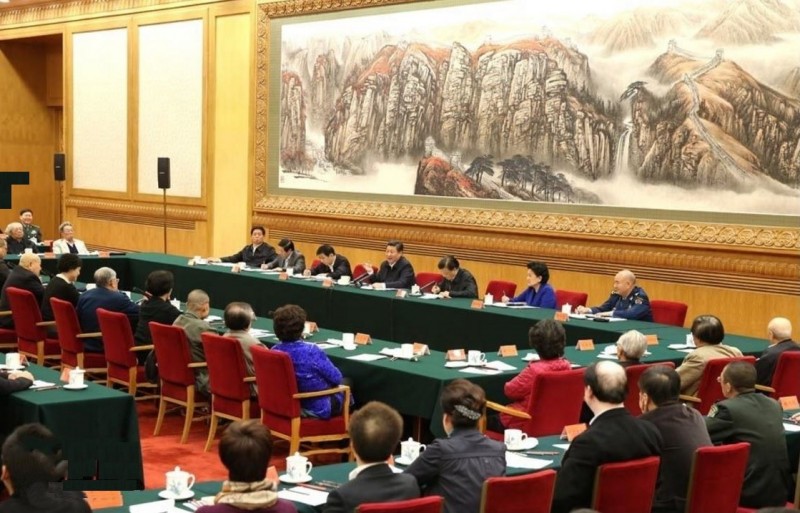 China President Xi Jinping gave a speech on the role of arts in a symposium attended by artists and propaganda officials in 2014. Image released from state news wire Xinhua.

A year after China's President Xi Jinping delivered a speech on the role of the arts during a symposium in Beijing attended by leading artists and propaganda officials, state-run media outlet Xinhua published the full text on October 14, 2015.

There was no explanation offered for why the transcript of Xi's speech, which called on artists to serve the people and be consistent with communist thinking, took so long to be published. At the time, Chinese intellectuals fearfully pointed out that it resembled Chairman Mao Zedong's talk on the political function of the arts at the Yan'an Forum on Literature and Art in 1942, a speech that marked the beginning of the Rectification Movement, a campaign within the Chinese Communist Party for turning the liberal and independent Chinese intellectuals into party mouthpieces. It also took more than a year for the full text of Mao's speech to be officially published on party mouthpiece, Jiefang Daily.

China’s leaders have long viewed the arts as a powerful weapon in the party's ideological armory and given direction as to what direction creative works should follow. But since economic reforms in the 1980s opened up the Chinese market to the world, Chinese artists have tried to push the boundaries those previous boundaries.

In his speech, Xi was critical of the market-driven culture, deeming some works to be “cultural garbage”. Below is a translated excerpt of the speech from the New York Times’ Sinosphere blog:

In some of their work, some artists ridicule what is noble, distort the classics. They subvert history and smear the masses and heroes. Some don’t tell right from wrong, don’t distinguish between good and evil, present ugliness as beauty, exaggerate society’s dark side. Some are salacious, indulge in kitsch, are of low taste and have gradually turned their work into cash cows, or into ecstasy pills for sensual stimulation. Some invent things and write without basis. Their work is shoddy and strained, they have created cultural garbage.

‘Art is the trumpet of the era’

Xi Jinping's so-called “Chinese Dream” of a national revival involves defending Chinese morals. One way this has translated to the real world is strict controls imposed on media outlets and the Communist Youth League's millions of “civilization volunteers” to fight the ideological battle online.

Since the full text of Xi's speech was released, major social media platforms and sites were flooded with flattering comments echoing Xi's view.

For example, Xinhua's commentary has been reposted many times:

Some cultural workers belittle themselves by ignoring the great era of national revival and submerging themselves in the tiny era of materialism. Any artists who have a bit of knowledge about the dialectics of the era and the individuals would be drawn by the speech and contribute to the spiritual construction of China.

The Communist Youth League and its branches, of course, joined in the praise:

Many individual users called on others to “learn” from the talk:

Review Uncle Xi's speech on the art and literature forum again. The part on the problem of contemporary art and the creative sector is so sharp. Simple and precise. This is really great! Good. Objective and comprehensive, deep and easy to understand. Extremely good.

After one year, Uncle Xi's speech on the art and literature forum on 15 October was published. In this speech, Uncle Xi quoted from so many references and mentioned 112 artists and literature writers from China and all over the world. It is like covering half of the history of human civilization. Come and learn.

‘Today, lies have replaced everything else’

No wonder some analysts said the speech, apart from being a revival of Maoist ideology, is an attempt to burnish Xi's image as a new cultured type of Chinese leader, rather than a traditionally rigid communist party leader.

Though direct criticism of the speech could not be found online, attentive readers can still find some subtle reminders of the brutal repression of intellectual thought throughout Chinese contemporary history. This comment referenced Wang Shiwei, a writer who was expelled from the communist party and executed on Mao's order in 1947 during the Rectification Movement:

Our culture has been monopolized by the political system, and [Mao's] talk in Yan'an has resulted in the lack of diversity in art and literature works. Wang Shiwei told the truth and got himself killed. Then telling lies becomes a trend. Today, lies have replaced everything else.

Apart from the Rectification Movement, which led to the deaths of about 10,000 intellectuals, the anti-rightist movement in the 1950s also led to the persecution of hundreds of thousands of intellectuals:

The state run media published Xi's speech on art and urged “a hundred flower bloom” in alignment with socialism — isn't that contradictory? Back in 1956, the Chinese Communist Party introduced the principle of “a hundred flower bloom and a hundred school of thought speak” in the art and literature sector. One year later, the anti-rightist movement was launched and those who spoke up against the “double hundred” principle were labelled as rightist. The People's Daily newspaper admitted in 1967 that the “double hundred” principle was a trap to catch dissent.

In fact, Mao's edict on aligning arts with the party's objectives went to the extreme during the Cultural Revolution, with the Red Guards attacking and destroying Chinese traditional artifacts as well as foreign arts. The interpretation of the Yan'an talk led to a party-sanctioned form of political art and the purge and torture of many well-known artists and cultural figures for alleged wrongdoings.

‘Be worried, be very worried…’

Since 2012, after Xi become state leader, a series of developments has suggested a revival of Maoist ideology in China. In 2012, 100 artists copied Mao's words by hand for a commemorative edition to mark the 70th anniversary of his Yan'an talk. The contribution of several top writers, including Nobel laureate in literature Mo Yan, triggered widespread criticism that they had endorsed an assault on artistic freedom.

Xi: “With everyone joining their hands together, our country's art and literature will have a hundred flowers blooming”. Be worried, be very worried…