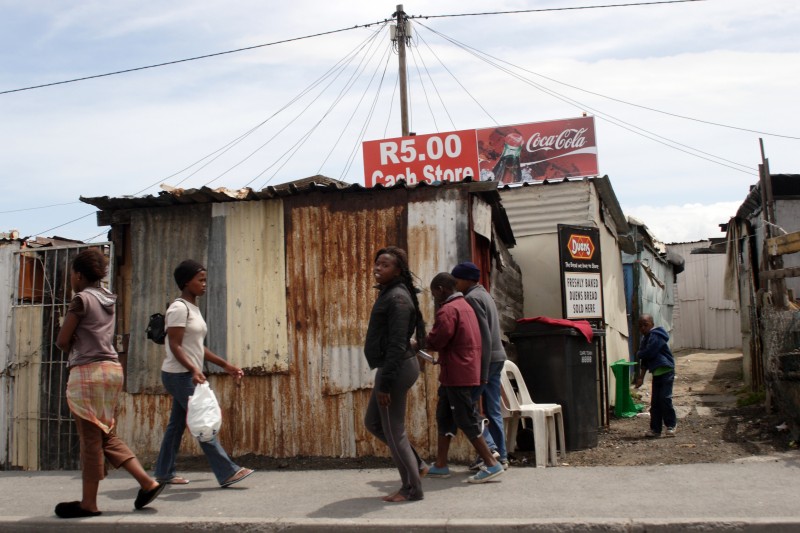 Students argue that fee hikes will exclude the children of poor, mostly black South Africans families, such as the ones living in this poor township, Khayelitsha. Photo by Tomasz Grzyb, copyright Demotix. January 9, 2008.

The South African government intends to increase university tuition fees in 2016 by as much as 12 percent. Students argue that the increase will keep poor, mostly black South Africans from higher education. Protests against the proposed university fee hikes, which started at Witwatersrand University (also known as Wits) last Wednesday, October 14, have spread to other major universities, such as the University of Cape Town, Rhodes University, the Nelson Mandela Metropolitan University, University of Limpopo, and Cape Peninsula University of Technology.

Hundreds of students stormed the gates at the South African Parliament on Tuesday, chanting “fees must fall.” On the same day, members of the opposition group Economic Freedom Fighters were kicked out of parliament, after showing their support by shouting the protesters’ slogan.

President Jacob Zuma will meet students leaders on Friday, October 23, to discuss the issue. Wits University, where the protests began, has decided to suspend temporarily its plans to raise student fees 10.5 percent.

According to an Associated Press article by Christopher Torchia, the average tuition fee for a first-year undergraduate student studying the humanities at Wits is between $2,200 and $3,200 this year and there is a one-time payment of $730. (The cost of textbooks and accommodations is not included.) Student protesters and their supporters are asking for a “zero increase.”

In his analysis of the protests, Wits University Student Representatives Council President Mukhove Masutha asserts that restoring communities’ dignity and disrupting the “revolving door of poverty” are the main aims of the protests:

If this revolving door of poverty and marginalisation is not militantly disrupted today, the majority of South African sons and daughters will follow in my mother’s footsteps of normalized pain and conscious submission to a humiliating system. This is the lens through which one must look at the revolutionary, anti-fee increase movement led by Students Representative Council at the University of the Witwatersrand and other campuses across the country. It is for this reason that I argue that free higher education will be the biggest salary increment our mothers will ever receive in their lifetime.

Restoring the dignity of our communities and safeguarding our future and that of our country is an ideal that we must beg no one for. The current wave of protest must mark a declaration of war to all those participating in the commodification of higher education as a product in the market. The time for rhetoric has come to an end, we must take it from here.

Looking at the issue from a legal perspective, law professor and blogger Pierre de Vos warned that limiting poor students’ access to higher education could be unconstitutional. Higher education in South Africa, he observes, is a right and not a privilege:

Given this disastrous state of affairs a good argument can be made that the state and University managements have been infringing on at least two of the constitutional rights of those who have the ability and inclination to further their studies but are hampered from accessing higher education by their lack of funds or are prevented from succeeding because of a lack of academic support.

First, section 29(1)(b) of the Constitution states that everyone has the right “to further education, which the state, through reasonable measures, must make progressively available and accessible”. Unlike the other social and economic rights contained in section 26 and 27 of the Bill of Rights, this right is not qualified by requiring the state to make further education available and accessible only “within its available resources”.

This means the state will not automatically be able to justify its failure to make further education available and accessible to more students, on the basis that no resources are available to do so. The drafters of the Constitution thus decided to treat education differently from the right to housing, health care and sufficient food and water, which the state has a duty to make accessible progressively but only within its available resources.

Blogging at “Africa Is a Country,” Vito Laterza discussed how the protests are evolving to tackle other issues like the outsourcing of university personnel.

Protesters’ requests include the end of outsourcing of all university personnel – cleaning staff is one such example, fetching very low pay under precarious contracts. Outsourced workers have already started to join, showing that a broader convergence of interests is a real possibility. (For example, 3 of the 23 people arrested at UCT on Tuesday where workers. At some point campus security and a bus shuttle service drivers also joined the protests)

This alliance would give university students the role of ‘spokespersons’, articulating demands for racial and economic justice coming from across the country. From informal settlements and townships to disenfranchised rural areas, people have been expressing discontent with their conditions in their own specific ways and contexts, and are calling for change. Their voices remain largely unheard in a national debate dominated by a strong bias towards university-educated citizens – that’s why university protests attract widespread media attention and can have a significant impact on policy-making.

The YouTube video below shows members of the Economic Freedom Fighters being kicked out of parliament for chanting “fees must fall”:

On Twitter, students, parents, politicians, and celebrities are using the hashtag #FeesMustFall to voices their anger and disapproval of the hikes.

Legafele summarized the benefits of the protests to the country:

There are future benefits for the country in the #FeesMustFall. The child of a domestic worker can become an engineer as that of her master!

Referring to students who have been arrested since the beginning of the protests, one Twitter user remarked:

All of us who are able to, please can we do same. We need to fill all holding cells to overflowing. Make mockery of injustice. #FeesMustFall

Writing about the same issue of arrested students, Sentlese said:

Mathew Buckland could not fail to note how multi-racial the protesters are:

Lelo Amaka B pointed out that the students are not even demanding free education, which is guaranteed by the ruling African National Congress:

Some Internet users worry that South Africa might even be showing signs of becoming a police state.

To suppress freedoms of expression via brutal force is tell-tale signs of a developing police state. #FeesMustFall

Police have been using rubber bullets, teargas, and stun grenades against the students.

Guns in #June76,#marikana & #shapville have not stopped us from voicing our dissatisfaction against the system.#FeesMustFall

Some students are relatives of the police officers, Sentletse wrote:

“My father is a cop. I want to see him shoot me” #FeesMustFall pic.twitter.com/yMk6X0COSb

Khaya Dhlanga congratulated the students for their bravery:

“Let the kids liberate us from our own blindness. Viva youth of 2015 viva!” #FeesMustFall

Vast majority of people in the country are young. Largest voting block. The ANC must act fast. Be a friend of the youth. #FeesMustFall

The protests are teaching other African countries, such as Kenya, the power of words:

Where South Africans say ‘must’, we (Kenyans) often say ‘should’. Power of framing. We are learning. #FeesMustFall

The big question (and fear) in the ANC is whether, in what is going on, one might identify the seeds of an “Arab Spring”.

For live updates of the protest, please visit The Daily Vox.