Two Sides of the Reality: A Summer Lesson in Chios Island 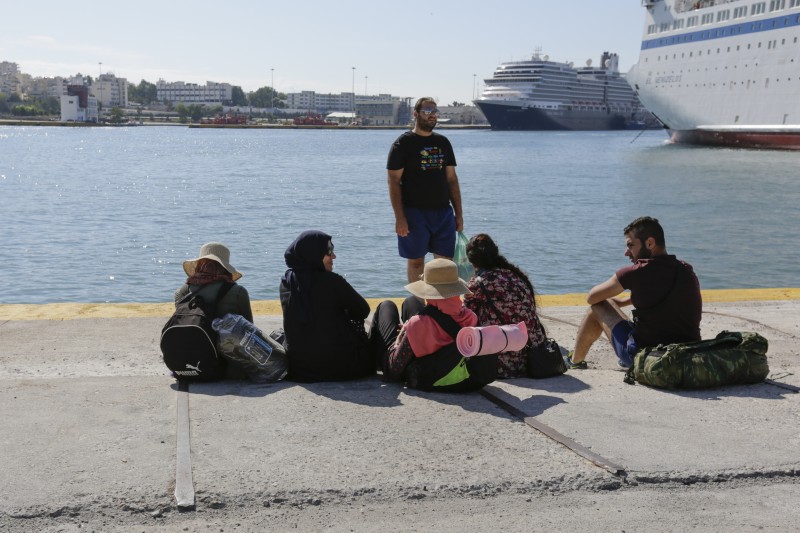 A family of refugees sits on the ground in Piraeus Harbour, watching out towards the sea, waiting for the bus to bring them to the metro station. Photo by Michael Debets Copyright Demotix (28/9/2015).

This summer was a hard one—and please, let's not start with the typical, “Come on, it's still September….” Summer has ended; autumn is here. And this past summer brought a lesson that will continue through autumn and winter and long after, as long as the misery inside and outside our country persists.

Amidst the whole universe of crisis, polarization, destitution and resentment in Greece, we had a tourist season here in Chios that wasn't in crisis at all, and I can attest to that as an eyewitness.

And then came the vast numbers of refugees. Or “illegal migrants”? Immigrants? I will simply call them “hunted people”, people seeking hope. And added to the local people's need to survive was that of the foreigners. And then they became one.

Every day at Chios Port there's the same image repeats itself: the Coast Guard patrol vessels bring ashore the people they collected during previous night and early morning. The same is done by small boats sailing from Psara and Egnousa, two small islands near Chios. Throughout the summer, the disembarkations were taking place in the daytime and early evening at every beach across the Turkish shores. Some time afterwards, buses would arrive to collect the people and transfer them to Port Authorities, where the Red Cross was on hand to offer first aid or any other medical help.

Every morning, the port becomes one giant drying rack piled with clothes, shoes and personal items that sundown will find dried, packed into backpacks and moving on to their trip of hope. Every day, the same people  guard the coastline on rotating shifts, collect castaways, register them, provide them with the necessary documentation and allow them to continue their trip of hope. Every day. Every morning. At the port. Port authorities, Red Cross workers, volunteers, rescuers. Simple everyday people that go to Chios Public Garden and donate whatever they can afford.

Of course, there are instances of misconduct, misbehavior and disasters. People disappear among the crowds, quarrels take place, innocent souls are punished for something outside their control. But we shouldn't forget, for any reason, that there are some people on duty 24 hours a day, every day, who save others. We see them every day. Every morning. We shouldn't let anything prevent their work.

One day I met a Syrian couple looking for a bureau de change. It was Sunday. They asked what country this was, and its currency—they thought they had landed in Italy. Moreover, since many refugees arrive at Turkish coastline at night, they are told, as make the crossing, that they are merely traversing a big river. One of the most emotional moments I've experienced was when a refugee asked me if there was a mosque on the island, because he wanted to pray. I felt badly that all I could tell him was that “Yes, one exists, but you can't even get close to it, because it's permanently ‘under construction’.” The images and experiences are many and will stay forever in our memories, because it was a different season, a different summer than usual, and it changed all our ideas and perspectives.

Summer passed. And we learnt how to be human, we learnt to organize our needs; we learnt that there are always worse situations than ours, and and that nothing in life should be taken for granted. We learnt that if we have something spare, we should give it to our neighbor, whoever that happens to be, and not throw it away. We learnt to throw nothing away and re-use everything. We saw both sides of the reality.

This article was originally published in Greek on the portal StasiNews.