Precarity and Resilience in Calais 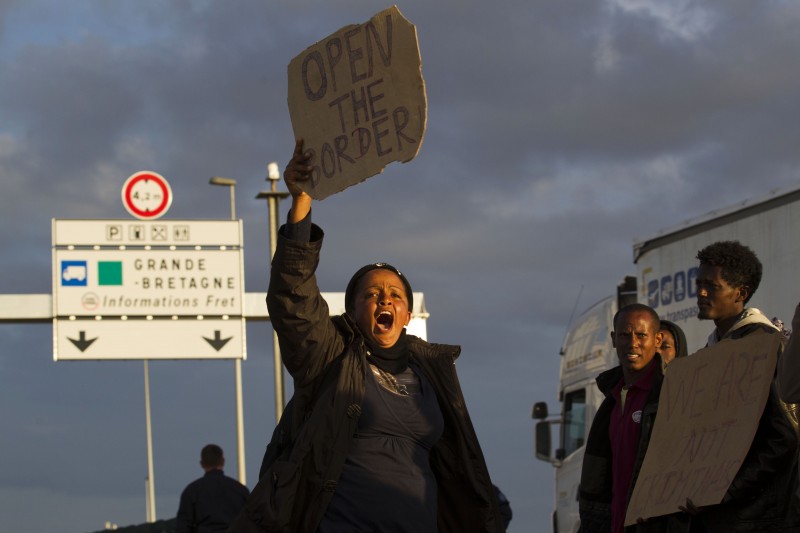 Migrants demonstrate to demand that UK open the border at Calais Eurostar Terminal France. PHOTO
© Jess Hurd/reportdigital.co.uk. NUJ recommended terms & conditions apply. Moral rights asserted under Copyright Designs & Patents Act 1988. Credit is required. No part of this photo to be stored, reproduced, manipulated or transmitted by any means without permission.

At the entrance to the scrubland and litter-strewn sand dunes that serve as a precarious residence to the over 5,000 men, women and children who inhabit them, there are signs painted on pieces of plywood and cardboard, welcoming visitors to “The Jungle” and calling for justice, freedom and refuge for its inhabitants.

Flimsy multi-coloured tents and make-shift tarpaulin shelters are clustered into various encampments on the outskirts of Calais, comparative permanence signalled by attempts made to create a sense of home and relative normalcy. Some of the tarpaulins are adorned with paintings, symbols and memories of places and people left behind and statements of loss, hope and struggle: “Darfur is bleeding”, “Freedom not Fences”, ”These Borders Kill”, “Black is not a Crime. Proud to be Black”, “We are Survivors”.

The refuge-seekers, who attempted to leave the French port city to cross the channel into England the night before, walk slowly back into the camp in groups, exhausted and chatting quietly as they pass the early-morning camp-fires of those just waking up. They pass on news of those who managed to cross, and the many who did not. Some of those seeking warmth around the fires are on crutches, or home-made walking sticks, waiting for multiple fractures sustained while trying to stow-away on lorries or jump onto high-speed trains to heal before they attempt again. Others have eyes swollen from exposure to tear gas and pepper spray, bruised limbs and ribs sustained by the police violence visited on their bodies.

Despite the bleak surroundings, residents—from Eritrea, Ethiopia, Sudan, Afghanistan, Syria, Somalia, Palestine, Iraq, Libya, Algeria, Mali and elsewhere—attempt to create community and spaces of welcome. Restaurants, a small bakery, a library and schools, an arts and music space, places of worship and community centres are organised by the camp’s inhabitants, and built from the same materials as the shelters where they sleep: left-over wood from pallets, plastic sheeting and tarps, plywood, corrugated iron sheeting, salvaged materials and donated cloth and blankets.

In the Ethiopian Orthodox church, women and men gather to pray. With mournful, beautiful ceremonial music playing in the background and candles and incense burning on small altars, Sara, a 22-year old who has been on the road for over a year and a half, leans back and exhales. “It’s the only place in the camp that I can relax, in which I really feel human. I come here to escape the chaos and noise outside and to feel hope”.

Sara lives with four other friends from Eritrea and Ethiopia, all with immediate and extended family in England. They all hope to make it, together, across the securitised border of fences and razor wire and other-ing that mark the final miles of their long journey. Detained in Libya with other Eritreans while their families were forced to pay smugglers additional money to release them, she met fellow travellers who had been tortured or raped by their captors. “That was the worst part,” she says. “The women were so ashamed, they didn’t want their families to know, but it was obvious they were really suffering. We are alive and we’re strong, but we have passed through experiences on this journey which we won’t ever forget”.

Later, in the small structure where Sara, Awet, Mariam and her friends live, we sit together as they make injera and spicy tomato stew over a camping stove. A recent arrival, a solo Kurdish traveller, stops by and asks if he can borrow a cooking pot. Meron, a 25-year old graduate, gives him one, then invites him to join us on the ground for lunch. He hesitates before declining shyly. “Solidarity is so important here in the camp,” Meron reflects. “It keeps us strong and gives us hope. If we didn’t help each other our situation would be a lot worse”.

In a tent next to the camp’s plywood clinic, Ahmed, a Palestinian engineer and youth worker from Yarmouk refugee camp in Damascus, welcomes passers-by with tea and memories. A member of a dynamic community centre in Yarmouk, he and his friends attempted to replicate some of their activities while in refugee camps in Turkey. “We thought we could keep a feeling of community by reminding ourselves of our identity beyond being refugees, again” he says “but our experience—in Turkey and in Europe—has been difficult and humiliating. We are just asking to be treated as equals, as human beings”.

Sitting on the benches for those waiting outside the clinic, a group of Sudanese and Eritrean men talk about those that they knew and those that they have heard of who have been killed over the past days, weeks and months, trying to make the crossing to England. A Somali teacher electrocuted while trying to jump down onto a train; an Eritrean student hit by a car while fleeing from the police pursuing her; a Kurdish musician crushed to death under a lorry; a Sudanese father of three hit by a train; unidentified bodies washed ashore, of those who were desperate enough to try and swim across the channel alone at night; the many others that add to a growing, avoidable were there routes of safe and legal passage, death toll.

“We are escaping wars and oppression, but when we arrive here we are treated like criminals,” Mulu says. “We also have to face aggression—of the police and of the local racist gangs who attack us if they find us alone”.

Khalil is an Algerian grocer whose wife and daughter remained in London while he went back to Algiers for his mother’s funeral. He was later refused re-entry to England and asserts, “We have a right to be with our families and to build our lives. Look around at this camp, where are the majority of people here from? We are from countries that have been colonised or had wars fought against them—by the same countries that now treat us like criminals and make us risk our lives to re-unite with our families.”

As night falls and it begins to rain, we sit with Afghani, Syrian, Iraqi and Kurdish families in a section of the camp in which newly-arrived families have gathered. Sitting around fires fed with remnants of wood from pallets and whatever rubbish is combustible enough to burn, people struggle to stay dry under tarps and plastic sheeting. Hot, sweet tea is passed around and those who have brought instruments with them play a few songs from home.

Ahmed, a florist from Damascus who was unemployed in the months before he left—“Flowers are for joyful occasions and we had little left to celebrate”—sits with his son, Mallas, who is 12 years old, is affectionate to all around him, and who has intellectual disabilities. Ahmed struggled to manage him in the rubber dinghy in which they crossed from Turkey to the Greek island of Samos. “He wanted to stand up and move around and we had to physically restrain him so the boat wouldn’t capsize.” He has relied on the help of fellow travellers along the way and is hopeful that he will eventually receive support services wherever they can finally claim asylum. “He is the only reason we left Syria. My wife and daughter have stayed behind until I can apply for family reunification and send for them, but we both want to be in a place in which our son is supported and given the respect he deserves”.

Hozan, a 65-year old Kurdish man from Mosul, shows us the scars on his ankles and wrists and healing wounds on his arms and neck. Kidnapped by ISIS after the fall of Mosul, he was tortured for months. “They treated me like an animal and threatened to execute me. They would tell me, every day, to prepare to die but, somehow, I lived.”

Jamila, nine months pregnant, from Dohuk in Kurdistan, has walked tens of kilometres in the past weeks. “I wanted to wait until the baby was born before we left, but we had no choice,” she says.

Fatima, an English teacher from Herat in Afghanistan, sits surrounded by her five children. The youngest is four and sits in her mother’s lap, her head resting on Fatima’s chest. “I feel very bad about how difficult this journey has been for my children,” she says, “but we had no choice—we had to leave. I hope we can have the possibility, in the future, to live in peace and safety”.

As those who will attempt the crossing in the rain prepare themselves—wrapping mobile phones and documents in plastic, writing their names on their arms or on pieces of paper so their bodies can be identified if they are badly injured or killed, drinking final glasses of tea and bidding friends good-bye in the hope that they’ll have made it across by morning—Amadou from Mali is pensive. He survived a sinking ship off the coast of Lampedusa and the drowning deaths of many of those he knew on board. To avoid being registered in Italy or elsewhere along the way, he walked hundreds of kilometres to avoid border and immigration officials, and was exploited and robbed of his little remaining money. Stuck in Calais for the past months he has relied on the limited, though committed, support from under-resourced local organisations, solidarity activists and volunteer groups.

“Despite everything,” Amadou says, “I have kept my dignity. And my hope—for a new life—is very strong. I have come this far and have to continue.” He and hundreds of others walk off into the night and towards an uncertain, and precarious, future.