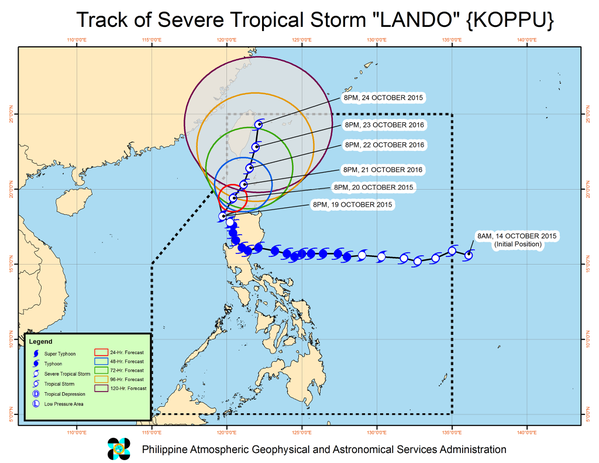 Monitoring the path of Typhoon Koppu as it batters the northern Philippines. Image from @govph.

Typhoon Koppu (known locally as Lando) has battered the northern part of the Philippines, affecting almost 300,000 persons in six regions of Luzon, the country’s biggest island.

Koppu brought heavy rains that caused massive flooding in several provinces. The rains also destroyed agricultural crops in the Cagayan Valley, a region known for being the food basket of Metro Manila and other urban centers of Luzon.

Koppy also disrupted the communication signals in many areas, leading to delays in media reports, as eyewitnesses were not immediately able to share photos, videos, and other information about the impact of the typhoon in remote villages. Despite this problem, following the Twitter hashtag #LandoPH is still one effective way to monitor the flood situation and relief efforts in the disaster-hit towns.

Some of the following photos show the kind of damage Koppu did in the Philippines.

Casiguran in the Aurora Province was particularly badly hit:

Houses destroyed in Casiguran, Aurora because of Lando

Koppu also destroyed several rice fields and other crops. This is a double tragedy for farmers, many of whom spent the past few months enduring a prolonged drought:

Agricultural damage and flooding in #Isabela in the aftermath of #LandoPH pic.twitter.com/MNALTzWB3Z

Farmers in Santiago Isabela says they will try to salvage what they can from crops damaged by typhoon #LandoPH pic.twitter.com/9gScjOEoEr

To immediately help farmers, a moratorium to the payment of land rent and land amortization in typhoon-affected areas and waiving of irrigation service fees are just and necessary relief at this time of calamity.

The National Food Authority should also be ready to buy farmers’ palay (unhusked rice) irregardless of classification, wet or dry, for them to recover the cost of production. At the same time, we demand government to extend full subsidy to the next production season.

Floods engulfed Cagayan, a province located in the northernmost part of Luzon:

Koppu also affected Metro Manila. In Marikina City, an eastern suburb, some residents were evacuated because of the Marikina River's rising water levels.