On the Eve of Elections, Côte d’Ivoire Tries to Move on From Its Violent Past 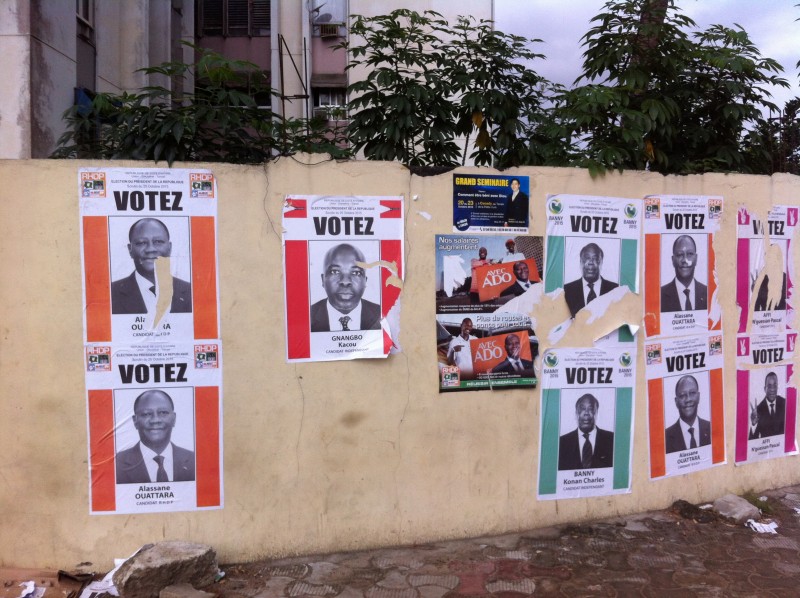 In the whole city of Abidjan have been put up election posters. Image by Tanja Schreiner

More than 3,000 people were killed in the violent political crisis that followed the presidential elections in Côte d’Ivoire in 2010. On October 25, 2015, the Ivorian population will be asked to go to the polls again. One week before the elections, the country seems to be holding its breath.

Already several months before, Ivorians were constantly talking about the presidential elections at the end of October, which will be decisive to the further stabilization of Côte d’Ivoire. Will or will there not be violence again? This probably is the most important question dominating the lead-up to the vote.

During the last months, I have been speaking with Ivorian friends who survived the crisis in 2010 and 2011, people I just happened to meet in the streets, Ivorian politicians, and members of the Ivorian diaspora.

Some have insisted that there will be violence again this year but said that it would not reach the severity of what followed the last presidential elections, which escalated into a civil war claiming some 3,000 lives. Others, though, swore that everything is going to be peaceful, the most common argument being that there currently is no strong opposition.

The main opposition party of former President Laurent Gbagbo, who is awaiting trial at the International Criminal Court in The Hague for war crimes during the post electoral crisis, is currently split.

Furthermore, there have been actions taken to make sure that the elections will be hold peacefully. In June 2015, the mandate of the United Nations Operation in Côte d’Ivoire was extended for another year.

In the month before the two-week-long election campaign began on 9 October, the media, which played an important role in heating up the debate in 2010 and 2011, faced calls to treat all candidates equally.

The African Union just announced this month that it is going to deploy 40 short-term election observers, and the Civil Society Platform for the Observation of the Elections in Côte d’Ivoire, which already observed the voter registration process, just trained 755 election observers.

However, people’s fear of another outbreak of violence seems omnipresent. After the horrific events following the last elections, many people in Côte d’Ivoire still cope with trauma. Some still dream of the dead bodies lying in heaps on the streets. A friend recently told me that she was not able to come back to the economic capital of Abidjan for three years because of what she experienced there during the crisis. Some weeks ago, all these traumatizing memories were brought back to her mind when a group of armed people robbed the hospital in Abidjan she now works in. 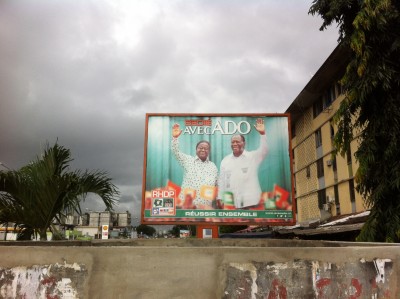 Throughout the city of Abidjan, election posters have been hung. Image by Tanja Schreiner

When I asked her what she thought about the coming elections, she just replied, “Il y aura rien” (“There won’t be anything”). A sentence I have heard very often in these last weeks, being pronounced almost like an oath.

However, it contradicts how people are behaving. Some already bought their tickets to Ghana, Togo or Europe months before. There are companies that even obliged their international staff to go back to their home country during the elections. Others bought food in bulk and recommend to have a certain amount of money at home — just in case.

Moreover, many people will certainly not be going to the polls. Only 300,000 new voters have signed up – from an estimated 2 to 3 million. “On October 25, I am going to cook pork and stay at home with my friends, celebrating the non-voting”, one of my friends told me.

But while some leave the country or boycott the elections, others commit themselves to promote peace. Women’s organisations in the west of the country have designed traditional fabrics to call for peaceful elections. A photo exhibition at the University Felix Houphouët-Boigny in Abidjan aimed to raising awareness among students.

And the football association “Foot’Attitude”, with the participation of football stars like Didier Drogba, launched a campaign called “Election C’ Pas Gnaga” (“Elections are not war”) to raise awareness for non-violent elections. In addition to this, messages of peace have been going up on social media in these last weeks. On YouTube, a group of Ivorian artists posted a video “Jeune, ma voix, mon avenir” (“Young, my voice, my future”) to promote the youth’s participation in peaceful elections.

Choosing the voice of peace is making the choice of a better tomorrow.

Of course Facebook, being widely used in Côte d’Ivoire, is a big part of where the conversation takes place. One of my friends, a university student from Abidjan, wrote on his wall (republished with permission):

Dear young friends, we are not far from the presidential elections and the doubt is installing in the hearts of all those that love Côte d’Ivoire. If we love our country, if our future really is in our hearts, do not give yourself to acts of violence, do not let you be manipulated, whatever it may be….

Now it just remains to hope that all these messages of peace will guide Côte d’Ivoire to presidential elections without violence.