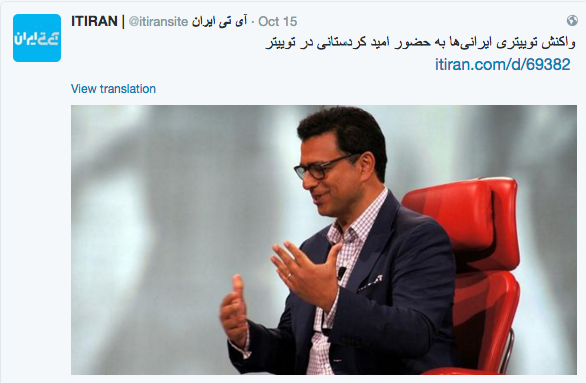 IT Iran, a publication similar to the American Tech Cruch, announces the appointment of Iranian-American Omid Kordestani as the new Twitter Chairman.

Twitter has been making headlines with recent changes under the new leadership of its founder Jack Dorsey. Amongst the changes was the announcement on 14 October of the appointment of Iranian-American Omid Kordestani as the executive chairman of the company.

Kordestani was a former executive at Google, often called the companies 11th employee. Before moving to California, Kordestani was born and raised in Iran until the age of 14.

The news has been covered in Iran by more moderate and reformist news sources, such as Shargh [1], which discussed Kordestani's past experiences, and ISNA [2], which covered his new unexpectedly low base salary of 50, 000 US dollars as Chairman.

However, the discussions have taken a more interesting turn amongst Iranians on Twitter, who are tweeting the news from an Iranian perspective.

IT Iran, a popular information technology news website similar to American Tech Crunch was quick to announce the news to its Iranian followers:

Today Jack Dorsey announces that Omid Kordestani will appointed to the Twitter board of directors as the Executive Chairman.

Sahand, a resident of Shiraz and host of a local tech show, tweeted he had foreseen such an announcement:

Another Iranian by the name of Nahal, living in an undisclosed location, pointed out that the appointment is a matter of pride for Iranians:

It is now again a matter of pride that an Iranian (Omid Kordestani) becomes the chairman of Twitter.

One Iranian Twitter user by the name of “Qajar Girl” was quick to criticize the excitement of Persian-speaking social media by pointing out Kordestani's weak ties to Iranians.

You should let go of Omid Kordestani. He doesn't follow a single Iranian. Please don't make such a fuss just because he's Iranian. Thanks.

Another Iranian, going by the pseudonym Dash Meiti — a play on the word “dash mashti,” a name for a south Tehran thug character in Iranian theatre and films — joked that praising Kordestani could lead to Twitter suspensions.

So we shouldn't praise Omid Kordestani since he could suspend our Twitter accounts!

Sadjad Jahangard, an Iranian living in Malaysia, theorized that this might mean well-known censorship of the platform in Iran would be lifted through the ethnic bonds between Aryans, the ethnicity often associated with Iranians.

In my opinion with this announcement of Omid Kordestani as the chairman of Twitter means that it's time Iran removes the filtering of Twitter :)) The Aryan must be friends with the Aryan :))