This is How Ecuador Takes Action on the Cotopaxi Volcano Emergency 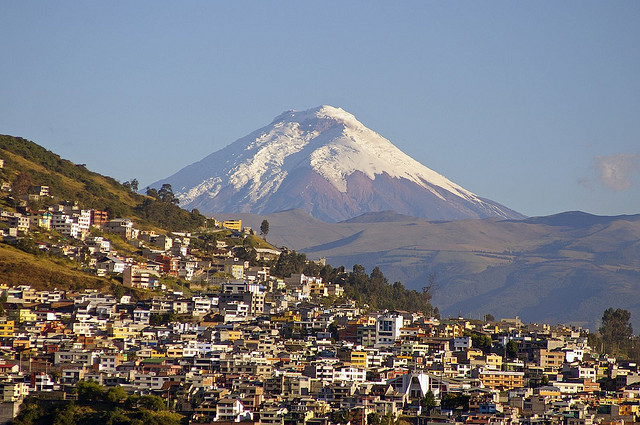 Located 50km (31 miles) south of capital Quito, Cotopaxi is one of Ecuador's most active volcanoes with several known eruptions. The last of these eruptions was recorded 138 years ago. But on August 14th, 2015 the volcano experienced unusual seismic activity and shot a column of steam and ashes into the sky, followed by two explosions. Authorities have declared a yellow alert, which remains in place, as the activity has decreased significantly but continues to be closely monitored for possible renewed increase.

The following video, uploaded by YouTube user Andes Climbing Ecuador, shows a plume of ashes and smoke coming out of the volcano on August 22nd:

Future volcanic eruptions pose a high risk to the local population living in the Cotopaxi, Napo and Pichincha provinces. It is estimated that 325,000 people live in settlements prone to fast-moving volcanic rock and mud slides imminent in the case a huge eruption does occur.

As Cotopaxi's volcanic activity remains high, specialists are dealing with three possible scenarios. The first: The eruption process continues for several months with minor explosions, with magma rising to the volcano’s interior reservoir and moderate explosions. The second: Violent explosions emitting large quantities of pyroclastic flow, melting the glaciers and causing avalanches. The third: The volcanic activity decreases. Options 2 and 3 are classified as the least likely to happen.

Three scenarios are possible for the Cotopaxi volcano’s activity if there is an increase in magma.

Faced with this situation, the Ecuadorian government has initiated outreach efforts through the National Risk Control Secretariat, such as “self-protection measures, evacuation routes, meeting points, lodging, and handling of animals” in areas surrounding the volcano, where they have also distributed protection materials like masks, goggles, and blankets. Furthermore, the Ministry of Agriculture has distributed cattle feed to “mitigate the effect of ashes on animals.”

One of the cities that would be most affected by an eventual eruption is Latacunga, located to the south of the volcano, with a population of 240,000 people. To prevent mishaps, the local authorities are distributing maps of safe areas for evacuation in case of an eruption. Among other preventive measures, the Ministry of Culture and Heritage has created a contingency plan to transfer movable property such as paintings, sculptures, books, historical collections and artifacts to what is known as the Arc Project in Quito, as well as other measures to preserve real estate.

Cotopaxi is a National Park and therefore a tourist destination, one that appeals especially to mountain climbers.

The private sector located in the probable disaster zone has also come together with the goal of evaluating preventive measures and minimizing the damage that can be caused by an eventual eruption. Similarly, private companies from nearby Quitoare are also coordinating volunteer aid under a plan called “Plan Cívico de Quito Prevención y Solidaridad por el Cotopaxi” (“Civilian Plan for Quito, Prevention and Solidarity for Cotopaxi”).

There are a number of campaigns explaining what to do in the event of a strong Cotopaxi eruption. There is even an app called “Emergencia Cotopaxi” (“Cotopaxi Emergency”), created by the District of Rumiñahui and available on Google Play, which reports on risk zones, preventive measures and more. A Twitter hashtag was also created to solicit questions from citizens about the emergency.

Ask your questions about Cotopaxi volcano prevention and contingency at HT #PreguntasPrevenciónCotopaxi pic.twitter.com/FU0vu4A38h

Local authorities are also using the situation as a learning experience. The General Secretariat for Planning of the Metropolitan District of Quito together with the Quito Innovation Lab (LINQ) and New York University's Government Labs (GovLab) have launched a Coaching Program to analyze innovations applied prior to, during, and after the possible eruption of the Cotopaxi volcano.

The program consists of a series of online sessions led by experts in risk mitigation of natural disasters worldwide. The sessions began on Thursday, October 1. Some of the topics addressed include: citizen sensors and the science of masses, starting networks of experts, food security and the handling of cold supply chains, etc.

There are 12 sessions conducted in English every Monday at 10am starting on October 1 and registration can be completed here.

One issue of concern at this juncture is government control over information related to the emergency. President of Ecuador Rafael Correa has declared a state of emergency that mandates “prior censorship on the information that social media outlets broadcast regarding the Cotopaxi eruption process.”  Several weeks ago, Ecuadorian Security Minister César Navas said that he would report anyone who spread rumors related to the state of the Cotopaxi volcano.