You May Not Know It—But If You Speak Spanish, You Speak Some Arabic Too 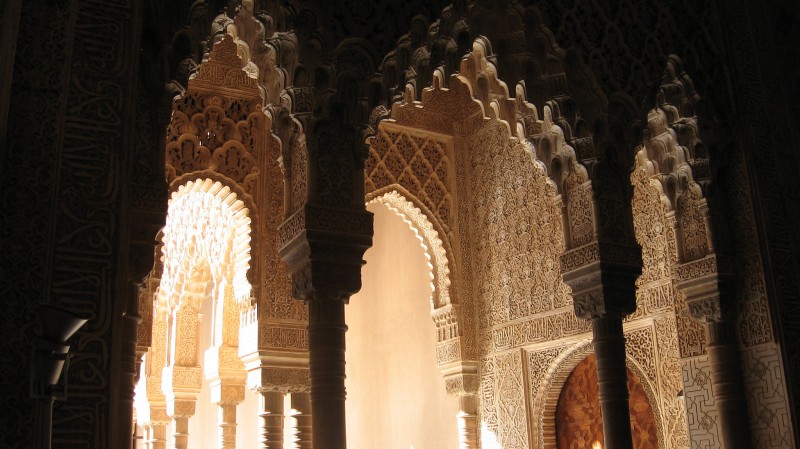 The Alhambra fortress in Granada, Spain, was built by the Arabic-speaking Moors in the 13th century when they ruled parts of the Iberian peninsula. Photo by Jeanne Menj. CC BY-ND 2.0

This article and radio report by Joy Diaz for The World originally appeared on PRI.org on October 15, 2015, and is republished here as part of a content-sharing agreement.

Rihab Massif, originally from Lebanon, was my daughter's preschool teacher in Austin. As a little girl, Camila, my daughter, spoke mostly in Spanish. And Massif remembers a day when Camila was frustrated because she couldn't remember a word in English.

“She was telling me about her camis,” Massif says.

Camisa is the word in Spanish for “shirt,” and Massif understood it perfectly because camis means the same thing in Arabic.

“And I was like ‘Oh! There are some words related to Arabic,'” she says.

To see just how many, Massif and I did an exercise. I'd say a word in Spanish, and she'd say it back in Arabic.

Now that I am aware, it seems like I hear Arabic words everywhere.

Take, for instance, one of my favorite songs by Latin Grammy winner Juan Luis Guerra.

“Ojalá Que Llueva Café” is peppered with words like café (coffee) and ojalá (God willing, or hopefully) — both of which come from Arabic.

Linguist Victor Solis Parejo from the University of Barcelona in Spain says part of the language Spanish speakers use comes from a legacy of the Moorish influence. “Moors” was the name used to refer to the Arabic-speaking group from North Africa that invaded what would become Spain back in the eighth century. Their influence lasted about 700 years and is still visible today.

“Especially if you travel [in the] south of Spain­. For example in Merida, in the city where I was born, we have the Alcazaba Arabe, an Arabic fortification,” Parejo says. “So, you can see that in the cities nowadays, but you can also see that Islamic presence, that Arabic presence in the language.”

And of course, that presence traveled to the Americas with the Spaniards. About 4,000 Spanish words are believed to come directly from Arabic. That's why Maria Gutierrez, a Mexican aid worker with a non-profit in Jordan, says she carries a small notebook with her wherever she goes.

The sooner Gutierrez masters the language, the sooner she'll be effective with her aid work, and right now being able to speak Spanish is giving her a shortcut.

But why should this merger of Spanish and Arabic matter to Americans? Well, the two most spoken languages in the United States are English and Spanish. So, some wonder what could happen to these languages as time goes by, including Parejo.

“Languages are alive,” he says.

Languages adapt and borrow words from each other, especially those that live in close proximity.

“I still remember when I first came to Texas,” Parejo says. “I went to this restaurant with my wife and the waiter asked us, ‘Do you want to have dinner inside or do you want to go to the patio?’ I [had] never heard that word in English.”

Patio is a Spanish word.

If the influence exists to the point that we often joke about the existence of “Spanglish,” imagine what Americans will be speaking in, say, 100 or 200 years when tens of millions more Spanish-speakers may be calling the US home.