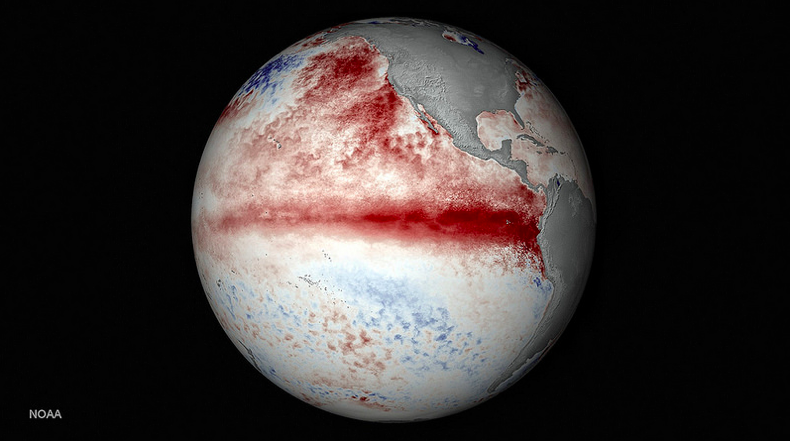 View of El Niño, on August 2, 2015. Image taken from the NOAA by Flickr user Stuart Rankin and is used under CC license Attribution-NonCommercial 2.0 Generic (CC BY-NC 2.0).

A new episode of the climatic phenomenon El Niño is building up in the Pacific Ocean. It should reach its maximum strength in South America between November and the summer of 2016. The experts are estimating that this “niño,” characterized by the warming of ocean waters, will rival in intensity the 1997 phenomenon, which led to considerable economic losses in numerous countries on the South-American Pacific coast that had global repercussions.

In fact, according to the information provided by the multi-sectoral committee responsible for the National Study of El Niño phenomenon (Enfen), a temperature raise in the Pacific has been noted these last few days opposite the city of Paita, in the North of Peru and next to the farthest point in South America.

What are the measures taken in the South-American Pacific region to alleviate the effects of the “niño” once it hits home? Most people remember that in 1997, the climatic phenomenon caused economic losses totaling around 7.5 billion US dollars in the Andean countries. These losses were mainly due to the flooding and landslides caused by the rise of rain water in certain places and drought in other areas. The fishing sector also suffered losses due to the changes in the water temperature and salinity driving away certain marine species from the Pacific coasts.

WHAT IS THE “EL NIÑO” PHENOMENON? ► More details on the phenomenon that has hit a number of countries including Peru.

In 1997, El Niño direly affected Peru, with losses estimated at 3.5 billion US dollars. In light of its experience, the country now has different institutions put in place to intervene in cases of emergency. Enfen, mentioned above, goes back to 1977, but it has become more active in recent years. The Center for National Emergency Operations related to the El Niño Phenomenon, a new body, benefits from a budget and a personnel adapted to emergency response mainly by air. Previous experience shows that in case of heavy rains (that could be eight times more intense than usual) and landslides, the roads will be the first to be affected.

According to the article published by a local media outlet, roads and airports are among the most vulnerable elements, mainly in the North of the country. The media also note that the majority of private sector businesses still haven't taken any measures regarding the coming climactic event. On the other hand, local communities are complaining since they still haven't received the allocated budget for emergency management from the Central Administration. The State of Emergency has already been declared in 15 regions as 1,264 districts are at risk of being hit by El Niño.

Another delicate matter is the important architectural and cultural heritage of Peru present in the high-risk regions. The Ministry of Culture has taken some measures and allocated some funds in order to protect it. Nonetheless, the Minister, Diana Álvarez Calderón, has herself declared that these resources are insufficient. The business sector that is also expected to be affected has indicated that it is prepared to offer its help. However, private businesses have had a previous negative experience with the Ministry managing and centralizing the donations and with the tax collecting organ (SUNAT) delaying recording expenditure.

Ecuador was the second most affected country by the El Niño phenomenon in 1997 with losses amounting to 2.9 billion US dollars. This time around, the government has assigned around 850 million US dollars (compared to the expected 276 million US dollars in Peru) for programs and projects designated to minimize the adverse impact of El Niño on the country's infrastructure and economy. The agricultural sector might also be hit since the estimated production of white rice should decrease by 16%, corn by 22%, sugar by 40% and bananas by 30%.

The Bureau for Risk Management is the Ecuadorian government body that coordinates the different programs to reduce the effects of the phenomenon. So far, it has created working groups, developed training programs, prepared intervention plans and other activities. For example, the school calendar has been modified so that the schools can be used as a safe-house by people in need of shelter.

An example of more concrete achievements is the work on the sediments drainage conducted on the Guayas channel in Guayaquil. However, some experts have affirmed that it is not sufficient since the river drainage hasn't been carried out in decades before this latest intervention. Numerous rivers in Ecuador apparently need a lot of work and most communities do not clean their rain water evacuation systems to avoid clogging. Among the different suggested solutions, some have proposed evacuating people living in high-risk areas in order to avert incidents and starting a big prevention campaign.

Ecuador : El Niño will change the daily lives of the fishermen

In 1997-1998, Colombia underwent losses of around 564 million US dollars, making it third on the list of the most affected countries in the area. Unlike Peru and Ecuador, more drought than rain is expected in Colombia, mainly in the Andean regions and the Caribbean. Correlated with an increase in temperatures, the droughts will lead to forest conflagrations, a phenomenon that has happened before. Zones such as the Caribbean, the North-East, the Eastern Plains and the Altiplano Cundiboyacense have been on alert for forest fires for months.

The National Unit for Risk and Catastrophe Management has produced a brochure that explains how to prepare and deal with the El Niño phenomenon and its effects, and provides advice for individuals, businesses, and local administrations. Moreover, the Government has indicated that the farmers will be the most hit by El Niño. Thus, it has centered its prevention efforts on these production sectors, assigning 143 million US dollars for preventative and emergency operations.

#Recommended How to deal with the El Niño phenomenon that has hit numerous regions in Colombia ?

With 527 million US dollars in losses as a result of El Niño, Bolivia was the fourth most hit country in the region in 1997. Therefore, the Bolivian government has reserved 11 million US dollars for prevention, emergency, post-disaster recovery, and reconstruction efforts. According to the National Service for Meteorology and Hydrology (Senamhi), higher temperatures due to the El Niño phenomenon might reach regions in the Paz, Beni, and Pando areas. Droughts and floods are also expected in different parts of the country. Some media have requested to highlight prevention measures which they say the country is lacking.

“El Niño” will hit Bolivia with droughts and floods

As the new climactic crisis gets under way, the countries in the region are each preparing in their own way for the upcoming “El Niño phenomenon. One can only hope that it won't be as destructive as expected, and that the preparations in place will help mitigate the worst of the natural disaster.