Myanmar ‘Cartoonists Have Been on the Side of the People’ 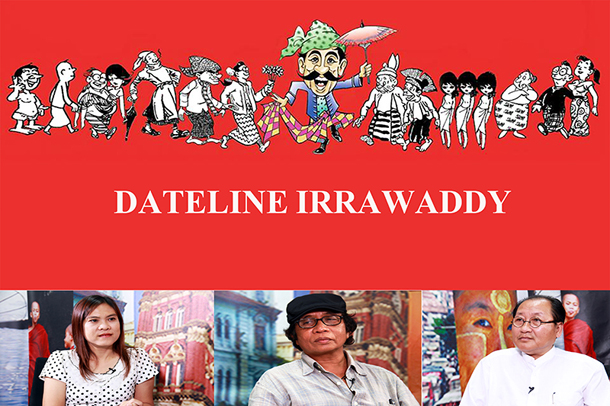 This edited article is from The Irrawaddy, an independent news site in Myanmar, and is republished on Global Voices as part of a content-sharing agreement. Cartoonists Maung Maung Aung and Win Aung were interviewed by Irrawaddy editor Aye Chan Myae about the relationship between cartoons and journalism.

Aye Chan Myae: This year marks the centenary of the introduction of cartoons into Myanmar. Cartoonists have gone through various experiences in that time. U Win Aung (U is a term of respect used to address men in a senior position or rank in Myanmar), what is your view on the experiences of cartoonists in political, social and economic aspects in 100 years?

Win Aung: I don’t see Burmese cartoons having a smooth history in the later period of this timeframe. Burmese cartoons have a good origin story. Sayagyi Shwetalay started his cartoon work in the period of the independence struggle. Though Burma was at that time under colonial rule, there was a certain degree of freedom of expression. Burma then regained its independence, and in the time of Anti-Fascist People’s Freedom League, there was also freedom of expression. The most striking example is cartoons of Saya U Ba Gyan, and taking at look at them, one can know (that there was freedom of expression). Then there came the caretaker government, then the Revolutionary Council, and finally one-party dictatorship under the Burma Socialist Program Party (BSPP). Then, the degree of freedom of expression cartoonists had enjoyed gradually decreased. Cartoonists had fewer things to draw cartoons about.

Aye Chan Myae: U Maung, would you tell me about the situation of cartoonists and their freedom of expression in this age?

Maung Maung Aung: I have now written cartoons for around 45 years. In these 45 years, cartoonists have been on the side of the people, reflecting the economic, social and political situations of the country. Now, it seems that we get somewhat more freedom after years of restriction. So, more people are drawing cartoons. There are two types of cartoonist. The first are cartoonists who takes the art form as his life and the second are opportunistic cartoonists. There has been some impact on those who have continuously engaged in cartoon art with deep faith. There is an unwritten code of conduct among cartoonists, according to what we have learnt from our seniors. Previously, there were prohibitions on things such as mocking the poor and the disabled and making personal attacks. It is more important (not to do such things) in this democratic era. To an artist, democracy is like a double-edged sword. While it can be used to stab others, it can also hurt the artist. So, it is not true that cartoonists can draw as they please. They will have to take responsibility for their actions when the law of democracy flourishes for some time.

Aye Chan Myae: What do you think of ethics among cartoonists, U Win Aung?

Win Aung: Mainly, what is important for a cartoonist is his faith. Cartoonists should make sure their creations reflect the life of people. Many say that cartoonists or journalists should not be biased, but must be neutral. It is wrong. They should have bias. They must. By bias, I don’t mean prejudice. If one side is right and another is wrong, which side they would stand for? Of those who oppress and those who are oppressed, which side they would stand for? They have to take a position. If a cartoonist has adopted a firm position and are to draw cartoons from that position, they have to think about ethics. For example, if the political system is bad, we can draw things about those who create that system, but we are not supposed to draw things about the personal lives of the creators of that system.