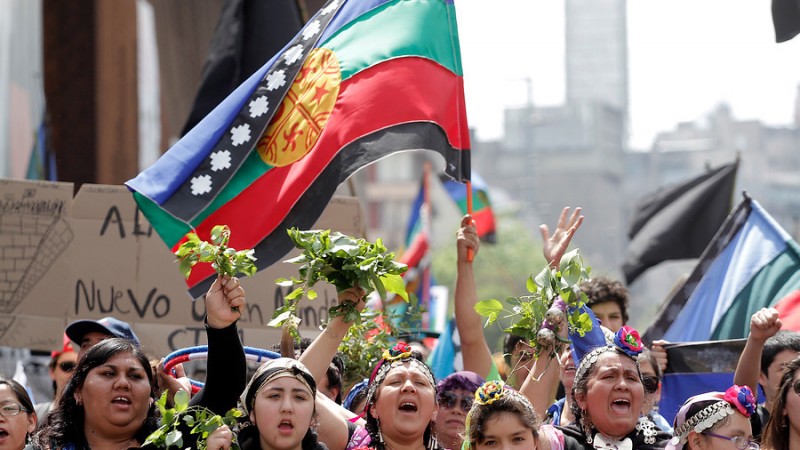 October 12 also saw the “march of the Mapuche Resistance”, which took place in Santiago, Chile, in a fight for the demands of the country's indigenous people. Photograph published on The Clinic Online under the Creative Commons license.

October 12, traditionally remembered as the day Christopher Columbus [2] arrived at the Americas in 1492, is causing controversy on and off the Internet. Points of view on the subject are both conflicting and converging: many commemorate the arrival of what they see as the modernization of the continent, while others protest what they see as the start of an economic pillage, the consequences of which can still be seen today.

Social networks were blazing with the Spanish-speaking voices of activists defending the legacy of the indigenous civilizations of the continent, sharing photos of protests against the celebration of October 12 and recalling the disadvantages that these groups suffer today. Others insist that it is necessary to leave the past behind and celebrate the fusion of cultures that was a result of the Spanish colonization.

Numerous memes and messages debated, challenged and disputed throughout the day. 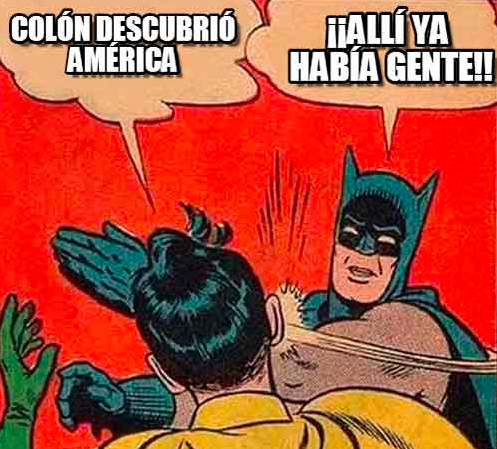 -Columbus discovered America
-There were already people there!!

However, reactions didn't just come from Latin America: many Spanish users were also protesting against the celebration of Hispanic Day [3], which takes place on the same day. The Iberian Twittersphere saw attacks against the government and rejections of the legacy of the colonization.

Similarly, there were displays of support for Spain and the unity of the kingdom in times of crisis.

Ultimately, one common course connected the reactions, and it was the hashtag contending that October 12 is nothing to celebrate #nadaquecelebrar [4]. 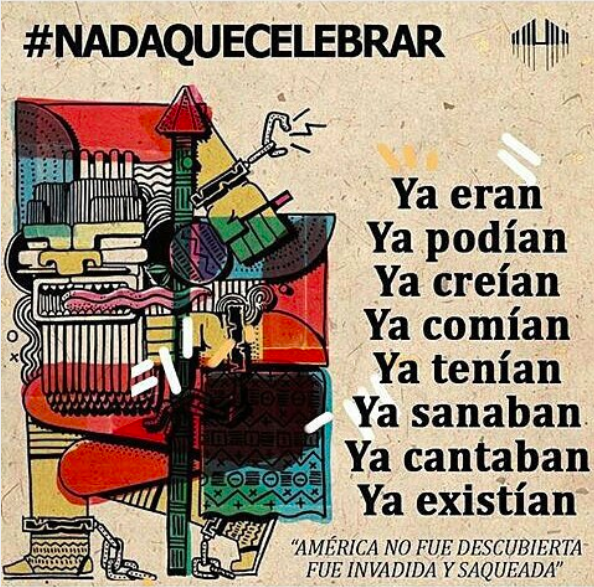 The hashtag was still trending after October 12 and prompted not only opinions and images, but also demonstrations and protests from indigenous communities who view the disregard for their rights as much more than just part of a distant historic past.

A large number of tweets deemed the process of colonization genocide, questioning the traditional discourse narrating the arrival of the Spanish Crown to the region, and highlighting the fact that even today it is other people who are profiting from the riches.

We never discovered America, we massacred and suppressed a continent and its cultures in the name of God. Nothing to celebrate.

#ColumbusDay [15] (literally “Day of the Race”) discovery by some destructive colonizers who stamped out our traditions, beliefs, culture and riches #Nothingtocelebrate [16]

#nothingtocelebrate [18] and what is the difference between today and 600 years ago? it is the same or worse our riches and resources go overseas

Azkintuwe [19], the newspaper of the Mapuche country, followed the march for the Mapuche community, which chose October 12 as a date to reinforce their demands in Santiago, Chile:

“March for the Mapuche Resistance

The march was also followed by the online Chilean newspaper El Observatodo [23], which clarified the group's demands in more detail:

Reclaiming the usurped lands, the human right to self-determination and above all an end to the militarization of the Araucania region [26] — these were the issues raised in the latest march by the Mapuche resistance.  During the protest, organizers denounced that the government, in defense of the interests of the big forestry entrepreneurs, keep “usurping the lands of the Mapuche peoples, suppressing their fight and criminalizing their demands”

The Mexican news collective Desinformémenos was particularly active. From their Twitter account,  [7]they shared numerous messages emphasizing that the main problem is that even today, indigenous communities throughout much of Latin America are still being displaced and marginalized.

Image: In 1492 the indigenous peoples were expelled from their lands. In 2015, the same. There is still so much to do.

The collective also used the caricature of Colombian Beto Barreto [30] to bring attention to the economic and cultural influences that many people consider to be the cause of the occupation over the countries of Latin America by foreign forces.

Other users, such as David García, drew parallels between the economic processes that seem to connect the history and present day conditions:

Images: The signing of the first free-trade treaty with Spain.

Today what we are celebrating is the first treaty of free-trade in history signed by Spain. #Nothingtocelebrate [13]

In revisiting the past, the discussion brought about discontent that underlined the complexity of the debate; for certain societies and mestiza communities [36], after years of influence, migration and ethnic merging it can be difficult to separate the distinctive elements of one common culture:

@LuisCarlos [37] only an aborigine can make a respected judgement with regards to this. The rest of us wouldn't exist if it weren't for October 12.

The featured image of this post is caricature by Brasilian Carlos Latuff, which has gone viral with the expansion of the hashtags trending on October 12.