Ladies, You Can Wear Men's Briefs as Shirts to Save Money. Just Ask This Russian TV Show. 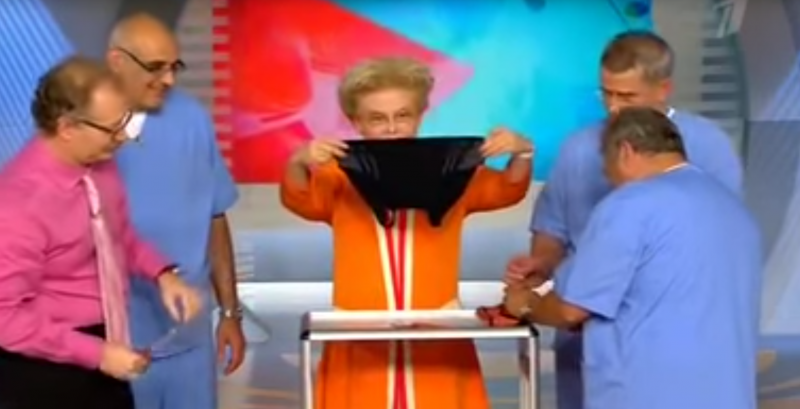 The Russian economy has fallen on hard times. Oil is cheap, Western sanctions have cut off access to foreign credit and hi-tech imports, Moscow’s military interventions in Ukraine and now Syria are costing who-knows-how-much money, and women are being encouraged to don men’s underwear as shirts. What was that last thing, you ask? Yes, a daytime television show on Russian network TV aired an episode earlier this month explaining how Russian women can save money by altering men’s underwear into tank tops.

The show is called Zhit’ Zdorovo (“Healthy Living”) and it stars Elena Malysheva, a therapist/teacher/doctor/professor who educates viewers about how live a more healthy and sustainable lifestyle. The program airs on Pervyi Kanal (Channel One), Russia’s largest state-owned television station.

The episode about transforming men’s underwear into ladies’ shirts was the first installment in the debut of a new segment called “We’ll Survive These Troubles!” where Malysheva offers viewers tips about how to get more out of household items. In subsequent installments of this series, she has showed her audience how to “get a second life out of a children’s backpack” and how to waterproof sneakers.

“This is our answer to our compatriots’ suffering because of prices, the crisis, the ruble’s fluctuations, and so on,” Malysheva told viewers, decked out in an orange dress and orange shoes. Later in the episode, when handling a pair of men’s underpants, it’s also apparent that Malysheva wears an Apple Watch Sport, which retails in Russia for a minimum of 23,990 rubles ($388). It’s unclear if Malysheva recommends any underwear-based substitutes for smart watches.

In the episode, Malysheva and her team of scrubs-wearing assistants take scissors to a pair of briefs and then pull them over a young woman from the audience. She smiles onstage, as Malysheva points out that the garment also makes an excellent swimsuit.

On YouTube an excerpt of Malysheva’s show featuring her instructions to women about wearing men’s underwear has attracted more than 46,000 views, including 76 “upvotes” and 220 “downvotes.”