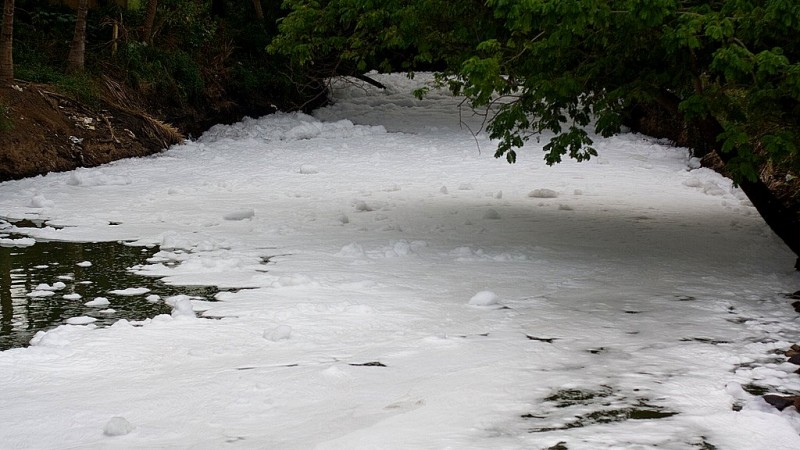 It's not snow, but foam covering the water. It's the way water flows in the 130-year-old Bellandur lake. The place has a heavy pungent smell. Image from Flickr by Kannan B. CC BY-NC-ND 2.0

No, it's not snowing in Bangalore. [2] What's floating on top of some of the polluted lakes of India's third largest city is actually toxic froth.

The foam is largely being produced in a lake called Bellandur [3], into which raw sewage and chemical waste have long been pumped without effective water treatment. When it rains, the toxic water from the lake forms a layer of thick white foam, which is often picked up by the wind, sending it airborne and spreading it among the localities around the lake.

Can this be true ? Are we living on earth or in hell ?Frightening.And unseen air pollution too is equally harmful. http://t.co/EGkqO4QxMU [8]

Bangalore, once known as the “city of a thousand lakes”, now consists of only a few dozen live lakes [10]. Most of these water bodies are interconnected, but there are no rivers close by to move the waters and the filth. The effect of rapid urbanization has taken a heavy toll on these once beautiful lakes, and now only about 17 lakes are operational, compared to 51 healthy lakes in 1985.

Some of the old lakes were converted into bus stands, golf courses, playgrounds and residential colonies. The lake systems receive over 130 million gallons per day of mostly untreated sewage from homes and industries all over the city. Thanks to the pollution, Bangalore has earned a new nickname: the “land of a thousand sewage tanks.”

@TrafflineBLORE [11] it doesn't snow in Bangalore, so we gave special effects on our lakes to froth to look like snow..

Life In Bangalore uploaded a video [17] to YouTube in May 2015 showing how the polluted froth is floating in Bellandur lake:

Debasish Ghosh, an IT professional and photographer from Bangalore, published a photo essay in the Guardian [18]. According to him:

Bellandur Lake, in India’s technology capital, now carries huge volumes of snowy froth which blocks the adjacent canals. After a downpour, the mass of lather in the canal rises so high that it lands on the roads and causes inconvenience to those travelling on two wheels.

This froth, which would otherwise have been a sight to behold, has a pungent smell and causes irritation on contact with skin. Although the residents have raised their concerns to the authorities, the government has not taken adequate measures to curb the problem.

In May, in two lakes the white foam caught fire [19] because of the huge amount of industrial waste in the water including detergents, oil and grease.

What will it take?

A Facebook page named Save Bellandur, Save Bangalore [20] is trying to raise the voices of the local residents to pressure the government to stop the pollution and clean up the lakes. Sanchita Jha posted [21] minutes of a meeting [22] on October 11, 2015, attended by more than hundred activists and members of the local press which reveals that:

* Huge [froth] at outlets, was forming even back in 2000
* More than 40% of Bangalore sewage enters the Bellandur lake via many inlets like direct drainage; storm water drains (SWD) filled with industry affluent carried all the way from different parts of the city.
* Pumping stations of sewerage treatment plants attached to Bellandur lake are either not functioning or not up to the capacity of incoming water.
* Due to its size and level of contamination of Bellandur lake, it has been continuously ignored/neglected/feared by government authorities.
* The air is contaminated and also due to lot of mosquitoes from lake, there are around 5-10 Dengue cases reported daily.
* The toxic smell around the lake is so bad that it turns silver articles to black!

Sanchita also requested that people sign a petition [23] and spread the word to stop the pollution. Siddaramaiah, the chief minister of Karnataka, finally responded [24] and instructed local authorities to visit the spot and tackle the problem.

I have spoken to BBMP Com & have asked him to take steps to permanently curb Bellandur lake pollution. @bbmpadmn [25] pic.twitter.com/qn0YS2Ckyb [26]

The Karnataka State Pollution Control Board (KSPCB) is setting up [28] lake protection watchdog committees across the city, involving local residents as stakeholders, to do more to stop the pollution. But Bangalore resident Ashlesh Garate [29] reminded on his Facebook that in 1999, the High Court ordered civic authorities to clean Bellendur lake, yet the lake remains polluted 17 years later. It remains to be seen just how long it will take to clean Bellandur and stop other lakes in Bangalore from being polluted.