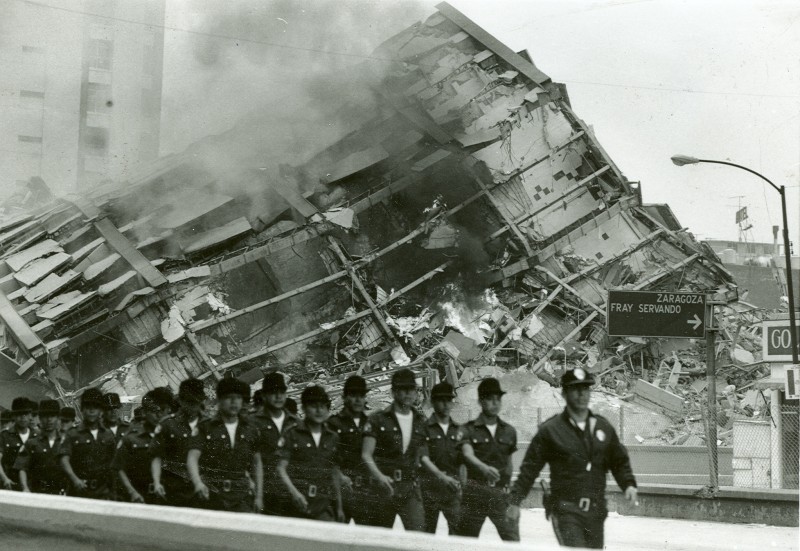 Security forces moving through Mexico City in the days after the earthquake. Photo courtesy of Union of Neighbors and Victims of the Disaster September 19 (UVYD-19 in its Spanish acronym), used with permission.

Following a powerful 8.1-magnitude earthquake on September 19, 1985, and an aftershock the next day, the people of Mexico City created truly democratic spaces and a widespread “social insurgence” as they took their city into their own hands, devastated by thousands of casualties and millions of dollars in losses.

Through the strength of their grassroots efforts, the residents of Mexico City proposed and enacted new organizational procedures, enabled new processes for building awareness, and even provided the pivotal challenge that led to the collapse of the political power enjoyed in Mexico City by the Institutional Revolutionary Party (PRI, in Spanish), which had maintained its control over public life and Mexico's capital city throughout the 20th century.

Alejandro Varas, a sociologist and member of the Union of Neighbors and Victims of the Disaster September 19 (UVYD-19), says the most significant outcome of the disaster was “the self-organization, as a fruit of the self-governance and self-reliance over public and private institutions.”

Neighbors from different districts, especially people from the Tlatelolco, Roma, Centro, Doctores, and Morelos neighborhoods, had to reach common agreements, draw up lists of needs and resources, and provide their own communication services. Locals from unaffected areas and university students formed groups to go into the affected areas, becoming rescuers and organizing shelters, supplies, and the distribution of provisions.

“You need to establish relationships with your environment, in order to reach shared goals—to save lives, to recover belongings, to arrange guards—all of it had to be pulled up by the bootstraps and all of it was done by the neighbors,” Varas explains.

The chronicler Carlos Monsivais speaks of an “awakening” in his 2005 book “Not Without Us: The Days of the Earthquake”:

Facing the remarkably ineffective government of Miguel de la Madrid, as paralyzed by the tragedy, and facing the fear of bureaucracy, as an enemy of impromptu actions, the whole of society across Mexico City organized itself with speed and skill, and with a core that stretched across upper and lower classes. Throughout two weeks, roughly one million people scrambled to create shelters, to supply food and clothes, to collect funds, to locate missing people, to retrieve the remains of the deceased and to rescue the survivors trapped in the rubble, to organize transport, to provide psychological counseling, to work to prevent health epidemics, to remove the mounds of gravel, and to demolish the ruins that posed hazards.

In that same year, the Common Disaster Victim Coordinating Council (CUD) was started, and produced project proposals to rebuild the city. Also, the Council for Urban Struggles and the National Coordinator for the Urban Popular Movement were formed. These grassroots organizations broadened the demands of the “damnificados de la vida” (Victims of Life), a term that took root during that time, referring to those who had become homeless or displaced, not only due to the earthquake but also because of economic reasons.

With the opposition's victory in the elections of Mexico City by way of the Democratic Revolution Party (PRD), many members of these grassroots organizations subsequently entered the Mexican government.

The UVYD-19 began on October 5 and held as many as three meetings a day, in the morning, afternoon, and evening. If someone approached them to participate, they would encourage that person's neighbors to join and organize, also. Months later, the tactics of UVYD-19 demonstrated that art and culture could be avenues for creating strategies to lend durability to the demands of the Mexican people.

“In the organization there were people coming from all political parties. But the way it worked was that approvals were given in the meetings, and they formed commissions to report back to everyone, and the people themselves granted approval or not,” remembers Alejandro Varas.

The writer interviewed the survivors of 800 shops that were destroyed, and describes how the bosses treated their equipment relative to their teams of 600 workers. She also profiled the protection of buildings that the government had wanted to demolish by force, as well as the authoritarianism and closure of citizens’ access to election officials, as citizens’ movements emerged. Additionally, she portrayed how concerts were organized (giving birth to the music groups Maldita Vecindad and Hijos del Quinto Patio), how Catholic mass services were coordinated, and how the Hospital Juarez was defended by the staff and neighbors after the catastrophe.

Confrontation between security forces and garment workers in Mexico City. Photo: Frida Hartz, courtesy of the Union of Neighbors and Victims of the Disaster September 19 (UVYD-19), used with permission.

Up until that time, Alejandro Varas recounts, “there was no citizen participation in the governing process.” Faced with an emergency, any dialogue was available exclusively through the PRI. If you wanted to talk with someone it was through deputies and chapters of the political party and regional delegations. The model of participation was through a “jefatura de manzana” (a neighborhood organization model ruled by a block leader), a rigid hierarchy of leadership. Officials were not chosen by the people, but instead appointed from above.

Moreover, Mexico City was the only territory that did not have its own ruling authority, since the department chief or regent (at that time, Ramon Aguirre) was appointed by the president of the republic. The regent appointed the heads of the branch delegations. All of this toppled, along with the buildings, when the earthquake struck.

The 2008 documentary “The Earthquake of Mexico” shows interviews with people from diverse backgrounds who experienced the tragedy. The journalist Humberto Musacchio says in the video that within a few days the citizens held the power in their hands, managing their own health and organizational structures.

After the earthquake, the first thing Miguel de la Madrid did was send the military out into the streets, a move which was widely rejected by the population. The soldiers did not allow the rescue workers to pass through their lines. The soldiers would say they did not need any more help, and they tried to sideline those citizens involved in shelters and rescue efforts.

Manuel Camacho Solis, secretary of Urban Development at the time, admits in the video that the president was worried and thought that the displaced disaster victims might take over the soccer stadiums heading into the World Cup projected for Mexico City in 1986.

Even though many of the changes that were stirred up remained in the electoral arena, Varas emphasizes that over the entire city there are two blueprints: the first belongs to international real estate capital investment companies and their projects, and the second has the imprint left by the movement of 1985: “self-organization and confidence in ourselves.”