What's Personal When You're Syrian? 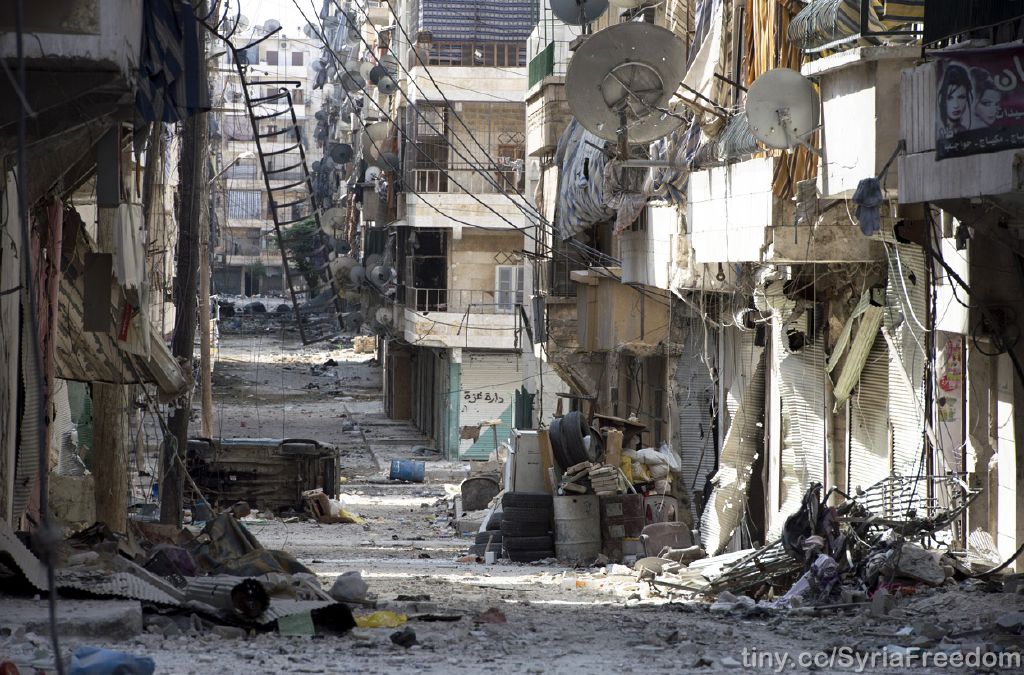 “They wanted to deny families the right to hate a regime that has killed, jailed and kidnapped their children.” A scene in Salaheddin, Aleppo, Syria. PHOTO: Freedom House (CC BY 2.0).

I see my psychotherapist on a weekly basis, without any of the feelings of shame widespread in our society regarding this practice. But I have a barrel of guilt inside me that is wearing away what is left of the love of life in my heart.

Wednesday at noon is the time I steal away from work to talk about almost everything in life. At the end of the session, the psychotherapist tells me: “But you don't talk about anything personal.” And I am taken by surprise, overtaken by the silly desire always to appear that I am right, or gain the upper hand in any argument (as a close friend tells me I always do), to show my therapist that he is wrong.

I am not sure exactly what constitutes “personal” and “public” in a Syrian's normal existence. My friends are the friends of resistance—our lives are intertwined as a result of prison and escape and the memory of our martyred friend. The only person left in my family that I am in touch with is my sister, who was forced to be displaced for security reasons related to me. Her displacement is part of the Syrian hemorrhage to the rest of the world.

My work is a continuation of the coordination for the revolution.

And even my attire reflects my gender in meetings in which I betray my right, as a woman, to appear more serious according to general society norms. Or perhaps it is the opposite: a reflection of my freedom in the face of inexcusable interference in women's privacy.

My body? I am not sure whether I love it or not. It is part of my beliefs that beauty comes in different sizes, contrary to the media’s uniform categorisation of what beauty is supposed to be.

I live in a town I don't know how to make peace with. It is the closest to Syria and the most workable among the choices available. My feelings towards it are irrelevant when it comes to “the greater good of the cause.”

Some time ago I went out on a date with a man. He started the conversation, perhaps to appease me, by asking if I knew whether the Geneva III talks will be held soon. I had forgotten what it is like to meet someone normal and talk about normal things. I don't even know the latest songs, except for the revolutionary songs produced over the past five years.

There is nothing “personal” at all.

Even my disclosure, in the first paragraph, about going to a psychotherapist, is to encourage people like me to admit their depression. It is a constructive disclosure. There is an armed thug in my head and my happy thoughts are littered with bombs. A thousand checkpoints and snipers stop memories from flowing.

At the beginning of the revolution, Bashar Al Assad's supporters used to accuse us of saying that our opposition to the regime is “based on personal feelings.” They wanted to deny families the right to hate a regime that has killed, jailed and kidnapped their children. But how to disentangle the personal from the public in your animosity towards those who want to kill you just because you attempted to assert your personal and public rights?

After this brainstorming session I can't be angry with my therapist, and I avoid his gaze. He is absolutely right: I have to stop my peaceful debate and confess that I am afraid of my personal thoughts.

I smile coyly, as I usually do, when he successfully overcomes my attempts at outsmarting him. He conquers all my attempts at pretending I am strong and all my dark sarcasm and elicits a true answer:

Am I now beyond reflecting the revolution, instead reflecting the war and, like the war, full of disease and death? My feelings of guilt prevent me from screaming that a healthy revolution is first and foremost the work of healthy people. I am afraid of Marcell, of her loneliness, or her confused value compass, of her relationship with a God she used to turn to for everything before the war. I am afraid to meet her and become terrified.

He asks me, for our next meeting, to look for personal spaces I can have fun in. I sense—and I am someone who loves challenges—that this may be one of the most difficult tasks I have to face this year.