Advancing Technology in a Digital India 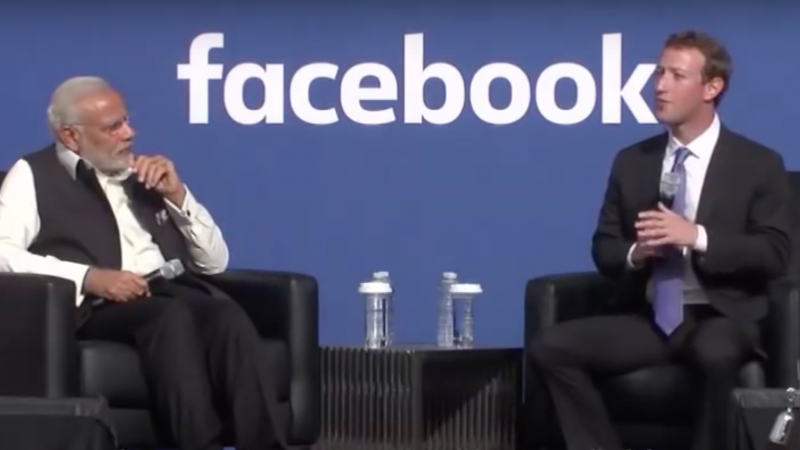 Last time Narendra Modi was in the United States (shortly after being elected Indian Prime Minister), fireworks, holograms, and vibrant speeches followed him wherever he went. Modi's second trip to the US has been rather different. This time, he's come to ensure that India is not left behind in the fast-paced technological age.

In the United States, Modi is exploring how social-media websites like Facebook can be used as tools for governing and diplomacy. Earlier this month, Modi met with Mark Zuckerberg, the founder of Facebook, to discuss how India's integration into the digital world. He has met with a number of other representatives from different technological companies, as well, including a panel discussion and dinner with over 500 technology leaders from companies such as Google, Microsoft, Adobe, and Cisco.

Modi has said he is pursuing what he feels is necessary to integrate India fully into the technological world. His vision includes connecting all schools and colleges to broadband Internet (he announced a plan to extend WiFi coverage across 500 railway stations in India with Google’s collaboration), launching a social media app to help the Prime Minister stay in touch with the Indian people, and identifying applications of technology that would make different aspects of governance faster through the use of the Internet.

Modi isn't alone in his support for such projects: Paul Jacobs, a chairman for Qualcomm, has pointed out that more than 60 percent of India currently owns mobile phones and that the “affordable smartphone revolution” could lead to over 250 million units being sold by 2020. Jacobs also announced a $150-million fund to be used to foster Indian start-ups, in addition to a “Design in India” initiative that would “create a local ecosystem for productive design.”

Modi coined the term “Digital India” to describe what he hopes India will look like at the end of this campaign. The country's Department of Electronics and Information Technology has created a Facebook page for the term, attracting more than 866,000 likes. The page reiterates the Prime Minister's hopes for “transforming India into a digitally powered society,” though there is little in the way of an explanation of how these goals might be accomplished.

Modi’s official website offers equally vague details about the Digital India project. Some of the main goals include (but are not limited to) high-speed digital highways connecting the nation, a lack of barriers when accessing certain information, and more channels on social media for active dialogue between the government and citizens.

Modi has already begun seeking more dialogue on social media, promoting on Twitter the potential benefits of the project:

At Digital India dinner we could see a perfect picture of India-USA partnership in the digital economy. This will benefit the entire world.

Highlighted steps taken by the Govt. to mitigate poverty through technology & how technology is transforming lives of 1.25 billion Indians.

Many Indians seem not to share Modi's excitement about his project's chances of digitizing the nation. Some, such as Varinder Bansal (a researcher at CNBC-TV18) and Sukhdeep Mangat, believe that Digital India's promises aren’t being kept:

@HathwayBrdband promise 50 Mbps and do not even deliver 5. worst is customer care who doesn't respond at all.Is this “digital india” promise

Thanks for making digital india much better 😑 2mbps for 1 Gb only 😤😤 @bsnlbroadband #DigitalIndia @narendramodi. pic.twitter.com/GXjVWjST30

A more prominent group of Indians seems to believe that the program as a whole is completely unnecessary, while much of the country's people are still starving in the street, in need of shelter, water, and other basic amenities. People like Sabena Siddiqi, a section editor for Al-Rasub online newspaper, points out how a lack of Internet access is the least of India’s worries, worrying that Modi has convinced himself that Digital India will solve all the country's problems:

#ArabsSpeakForIndianMuslims #Modi thinks he is some kind of medieval mad king from prehistoric times pic.twitter.com/xDgBzblBWH

While many Indians seem to feel that the country could be focusing on more important issues, there's no single consensus about which issues do deserve precedence over others. Some people, like Srikanth from Hyderabad, believe that the Indian government should prioritize farmers over computers:

I support this—> Green India before #DigitalIndia pic.twitter.com/fKvga5jgqq

Others, such as Nimit Walia, agree with Siddiqi and believe that many more useful campaigns could be created before Digital India:

Ok, the Digital India campaign is great How about we also start “WellFedIndia” “EmployedIndia” and “HealthyIndia” campaigns? #DigitalIndia

Haroon, a political commentator from Lahore, points out the irony of Digital India’s effort to create a more prosperous India:

Features of #DigitalIndia : Women urinate in public, no toilets. Meat is banned. No religion allowed but Hindutva Rape is OK Blame ISI 4 all

Despite all of the hatred towards the new Digital India program, people like Vinay Singh point out the irony in protesting the initiative on Twitter:

Every time you protest against #DigitalIndia using a digital media platform, irony does a somersault and jumps off a cliff, laughing.

While Digital India has the potential to connect millions of people through a more reliable and intertwined network, many Indians appear to believe that India has a long way to go before it can worry about issues as modern as Internet access. Nonetheless, the initiatives surrounding a more Digital India have already begun; only last week, the Indian Space Research Organization announced a partnership with the National Highways Authority of India to create better roads throughout the country, using ISRO-aided satellites to monitor Indian road construction.

Now the country will just have to wait and see if Modi’s dream of a more connected India yields a more prosperous society, or only causes further problems.