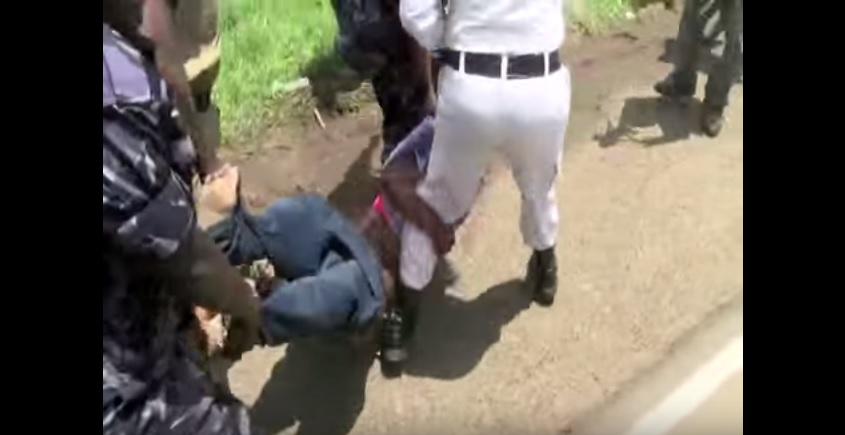 An official from the leading Ugandan opposition party Forum for Democratic Change (FDC) was arrested and stripped naked in public by police after they had blocked the party’s leader, Dr. Kizza Besigye, on his way to hold a rally.

Zainab Fatuma, a National Executive Committee member and FDC secretary for environment, is seen in footage from the scene struggling against officers, who restrain her and tear off her clothes. “Why are you undressing me?” she shouts repeatedly in the video.

However, the Uganda police force have denied that the police stripped her, saying that Fatuma undressed herself.

Reacting to the incident, a coalition of civic organisations in the country released a statement condemning the degrading treatment of women in active politics in Uganda:

The women’s movement, civic associations and women leagues of political parties and citizens who identify with adherence to the Constitution by all state institutions strongly condemn the use of degrading and dehumanizing acts by the Uganda Police Force which is mandated to provide law and order. These acts manifest as both a political tool to intimidate women’s leadership but also as a grave human rights abuse.

The incident and the police spin on it have angered many Ugandan citizens, prompting some to unite against police brutality by sending messages to the Inspector General of Police Kale Kayihura using the hashtag #SomeoneTellKaihura.

The role of police is not to undress women, but to redress crime! #SomeoneTellKayihura

‘Those pictures are horrific’

#SomeoneTellKayihura police is born of women. Those pictures are horrific. And the women are unarmed.

The law society promised to collaborate with the public to identify the police officers:

President Yoweri Museveni's rule has been characterized by the enactment of repressive laws, the militarization of what should ideally be a civilian police force, the unabashed recruitment and training of militias by the regime, and the ever-present threat of a clampdown on electronic and print media outlets and suppression of opinions on social media. When taken together with this most recent incident, it seems that the 30-year-old regime is digging in and has no intention of advancing political and civil liberties.