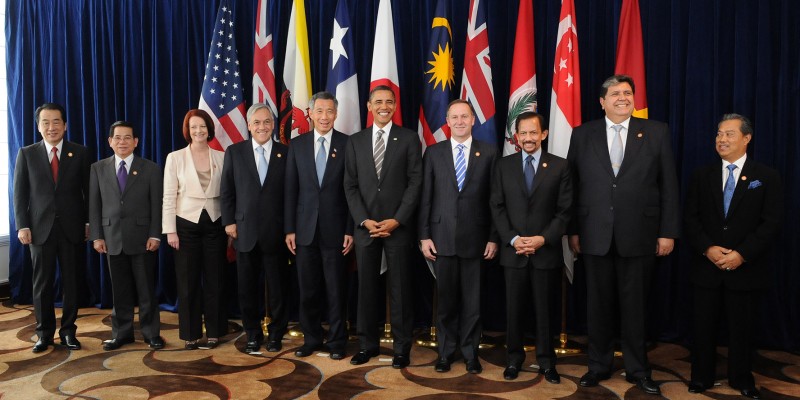 China has been excluded from the Trans-pacific partnership agreement. Photo: Gobierno de Chile via Wikipedia.

Following five years of negotiations, 12 countries announced on October 5, 2015, that they had reached an agreement on the US-led Trans-Pacific Partnership (TPP), a sweeping trade pact that is expected to set standards for 40 percent of the world's economy.

The countries include Brunei, Japan, Malaysia, Singapore, Vietnam, Australia, New Zealand, Canada, Chile, Mexico, Peru and the United States. Excluded from that list is China, the largest economy in Asia and the second largest in the world. The country is not likely to sign up to the TPP anytime soon because of Beijing's inability to meet the membership rules that set standards on labour rights, environmental protection commitments, intellectual property rights protection, currency management, Internet governance and fair competition policies in relation to state-owned enterprises.

A spokesperson for China's government tried to downplay the significance of the deal and stressed that the country is open to any mechanism that follows the rules of the World Trade Organization. But online some Chinese were anxious, fearing that it could further worsen the country's economic slowdown. Others appeared to relish the exclusion, taking it as evidence of China's need for more social and economic reforms.

An economic disadvantage for China?

The TPP allows member countries to lower or abolish tariffs with the aim of making trade cheaper and promoting business in all the countries involved. Some Chinese analysts have pointed out that the TPP could accelerate the movement of low-wage factory jobs out of China and into lower-cost countries such as Vietnam and Malaysia, as manufacturers look for free-trade benefits for their textiles and other goods.

China's central bank estimates the country could forfeit a 2.2 percent boost to gross domestic product (GDP) if Beijing does not join the TPP, according to commentary by the bank's chief economist, Ma Jun, published in the official Shanghai Securities News on October 8.

The US government has not hidden its intention to exclude China in the trade deal — President Barack Obama praised the TPP in a statement as a way to address China’s increasing influence over Asia.

Analysts, however, said the economic effects may be less broad than Washington predicts.

In the meantime, China has been pursuing its own bilateral trade deals with countries including Australia and South Korea. China is also participating in talks on the Regional Comprehensive Economic Partnership (RCEP), which would link the 10 members of Association of Southeast Asian Nations with Australia, China, India, Japan, New Zealand and South Korea, accounting for about 30 percent of global gross domestic product.

‘Do we even dare to join the club?’

Though the Chinese authorities responded in a cool manner to the country's exclusion, people have been sharing their pessimism over the deal online. Many feel that China is headed for a dead end because of its unwillingness or failure to deepen its reforms.

People still resort to conspiracy theories in response to the TPP. Let's not talk about exclusion, do we even dare to join the club? Regarding the rules on intellectual property protection, once it is implemented, all the domestic Internet giants are doomed. On environmental protection commitments, 90 percent of our small or medium-sized businesses will be forced to shut down. […] As for free flow of information, all paid Internet commenters like 50 Cent Party and Internet Water Army will lose their jobs.

Similar frustration appeared in a comment from user “kbldx” over TPP's membership principles:

Democracy, justice, rule of law, human rights, environment protection, each one would be beneficial to Chinese people. It’s sad for the Chinese that our country can’t pass the basic benchmarks of the pact. However, in some people’s eyes, it’s criminal evidence of imperialism to persecute China on purpose. I don't know what's in these people's minds.

Some of the critical comments were almost gloating over what they saw as China's upcoming misfortune. Sun Liping, a famous sociologist at Qinghua University, interpreted people's anxiety as reflecting their discontent with China's pace of reform:

Firstly, not only public intellectuals but corporate businessmen and even common employees are forwarding [these gloating comments about the TPP]. Secondly, have people seen the pact or can they fully understand all that it entails? Probably not in the majority of cases. Many people are excited probably because of the aspects of the pact that are unfavorable to China. Thirdly, are so many Chinese rejoicing over China's misfortune? No. What’s behind this is discontent over the status quo and demands for reforms. The phenomena is a wake-up call.

In Sun's comment thread, many offered their own explanations for the “gloating” phenomena:

What’s critical is that the unfavorable thing to China makes so many people happy, which shows that the Chinese Communist Party owes too much to the nation.

Currently, some retrogressive thoughts are so rife that it's making people lose confidence in the future of reform. The conclusion of the TPP could force China to continue reforming, but people are also worried that the vested interests could stubbornly cling to resistance. That’s why people feel secretly delighted but actually helpless.