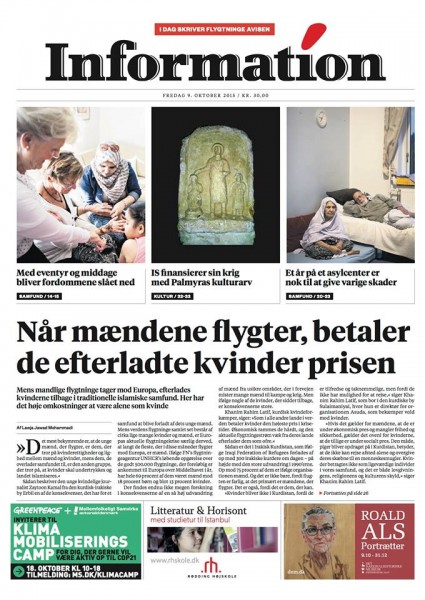 The leading article is written by Lawja Jawad Mohammadi, who came to Denmark in 2002 from Iragi Kurdistan, where she used to work with a local women's association, a crisis centre for women, and as a journalist at Yeksani (Freedom). Her article is about what happens to the women when the men flee.

In Copenhagen, the Danish daily Information let 12 refugees, some newly arrived, all professional journalists, take over the entire 48 pages of the newspaper on Friday, October 9.

Lotte Folke Kaarsholm, a features editor at Information, explained in an interview to The Guardian on October 9:

Refugees are almost all we talk about in Denmark these days,[…] We thought we would shut up and let refugees set the agenda. What we got is radically different from what politicians are discussing.

The newspaper has shared the initiative on its Facebook page, including the initial process of identifying guest journalists. The idea did not come out of the blue but was spurred on by the wave of other citizen-driven actions trying to lend more gravity and nuance to the refugees’ situation.

Denmark's reaction to the refugee influx
The issue of refugees and its handling in Denmark has been on the agenda for years. However, during early September Denmark experienced a large influx of refugees, as seen in other parts of Europe, which increased the polarization of the debate in Denmark.

The minority Liberal administration, which came into power in June 2015, is supported by the populist Danish People's Party. This has meanst a shift to a harsher right-winged policy on refugees and immigrants. In September the Danish government placed adverts in Lebanese newspapers basically warning refugees going to Denmark. Ironically, the publication of these adverts collided with one of the most massive waves of refugees in decades.

The Danish government has been criticised for not taking a proactive and constructive approach to provide conditions for refugees, and several citizen-driven initiatives to welcome refugees have emerged as responses to the government's inaction. Amongst others, a group called “Citizens Reaching Out” produced counter-reaction crowdfunded adverts welcoming refugees and apologising on behalf of the Danish people. On September 27 another group, “Forsamlingen” (the Assembly), hosted an event gathering many citizen-driven initiatives working to support refugees.

Giving a voice to the voiceless
Several European newspapers have included refugees and their stories on their pages, but the Danish initiative stands out for allowing refugees themselves to write and edit every word. Reactions have been very positve, and many international media are picking up the Danish daily's initiative, Huffington Post and The Guardian among them.

If you buy only one newspaper this year, then buy Information from today. It is written only by refugees and it is wildly interesting @informeren.

Much to many people's surprise, the newspaper's former editor, Lars Hedegaard—who later became a widely-known critic of Islam and in 2011 was convicted of hate-speech—has offered praise for the courageous editorial decision, recommending people buy the newspaper. In a radio interview with Radio24syv Hedegaard reviewed the unique issue and said that publishing it was a good idea, since it could enrich the debate about the fate of refugees.

They (the refugees) are numbers in a statistic, and they are stand-ins in a political debate, in which they often feel estranged. We all talk about refugees but today the refugees are speaking to us.
Each and everyone of them have their story, their destiny, their profession and dreams for the future. But we hear them too seldom and only too sporadically.