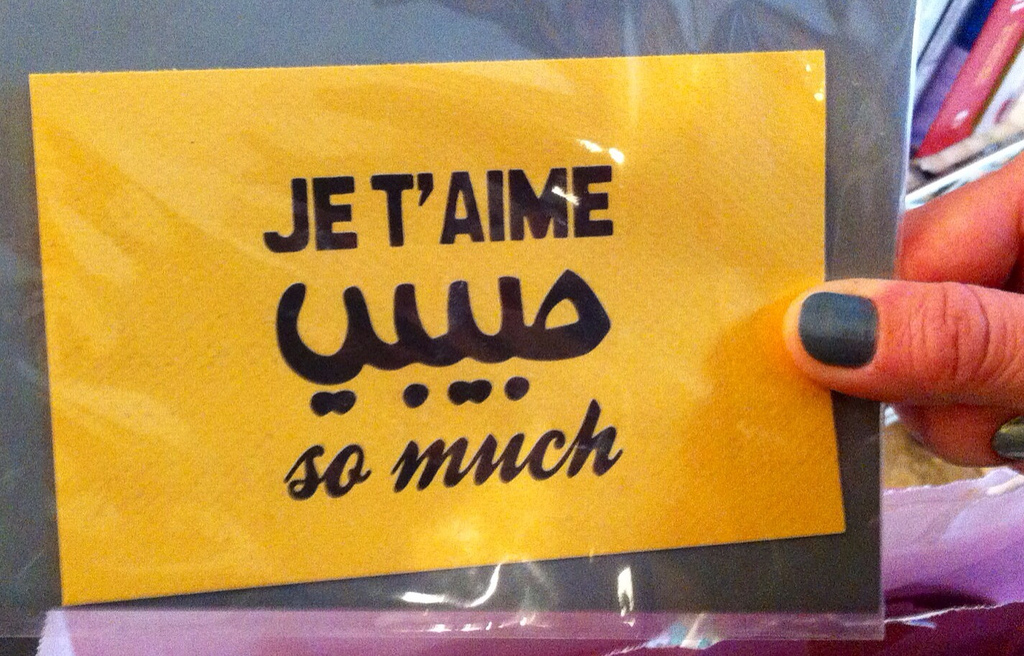 A postcard in a mix of French, Arabic and English that reads, “I love you, my dear, so much.” Spotted at Tawlet Souk el Tayeb Restaurant in Mar Mkhael, Beirut. Photo by Flickr user Ted Swedenburg. CC BY-NC 2.0

This article and radio report by Dalia Mortada [2] for The World [3] originally appeared on PRI.org [4] on October 5, 2015, and is republished here as part of a content-sharing agreement.

At this high-end organic farmer’s market in downtown Beirut, buyers and sellers speak a mishmash of languages, usually Arabic and English or French.

Just trying to pay for juice I have to switch back and forth from English to Arabic. The stand clerk starts in Arabic, “Here you go,” before switching in English, “these two [juices]?”

Pia Bou Khater is at the market with me. At the juice stand, she switches too. “Oh, I think I have change,” she says in English, before she continues in Arabic, “3000.”

Codeswitching this way is one of the characteristics that defines life in Beirut for visitors and for many Lebanese.

“When I'm interacting with people, like buying things or trying to bargain, I rarely switch,” Pia explains. “I do try to often figure out what the green leafy thing in question is, like, oh, is this the same as that in English? And then the word in French comes up,” she laughs, “and I'm like oh no I don't know it in French, please stop making this difficult.”

Multilingualism the way Pia knows it isn’t uncommon in Beirut. Many people here codeswitch to varying degrees, says linguist Loubna Dimachki. “Codeswitching, what does it mean? When you're combining two languages in one sentence or in the whole interaction,” she says, before she seamlessly uses the French word, “merci,” to say thanks to our waiter. Dimachki is considered “Francophone” — meaning, her dominant second language is French.

But that’s not the only reason she used “merci.” In Lebanon, hellos, thank-yous and how-are-yous are often said in French. Arabic is the core language, but kids are taught in French or English at school­. French- and English-language schools have been around since the 1800s, when Catholic and Anglican missionaries arrived in the region. Then, after World War I, the French ruled Lebanon until the 1940s.

But another linguist, Lina Choueri, says the regular mixing of the three languages in everyday life actually didn’t happen until much later. “I just remember it being there and my father being upset about it,” she recalls.

Choueri’s dad’s generation just communicated in Arabic. Choueri — who went to school in the 80s — codeswitched. “My father hated it! He would say, ‘When you start with a language, just stick to it! Don't switch to another language!’”

Back at the market Pia agrees with Choueri’s dad. She’s not crazy about the idea that people should be expected to know English or French. “What if you don't know the other two extra languages that come in the country? It's like linguistic racism,” Pia says. English and French, even more so, were imposed through colonialism and occupation, and they’re remnants of that complicated history.

But linguist Dimachki sees all this code switching in a different light. The way people codeswitch in Beirut is unique. It’s not necessarily determined by age or ethnicity, she says, and it’s not relegated to home or school or the juice stand at the market. Multilingualism really is everywhere. Street signs are in Arabic and French, government websites often include English. Menus in lots of restaurants or cafes are in all three languages, and you’ll hear people switching between them.

That’s what makes Beirut different from cities like Barcelona, Jerusalem or Los Angeles. A person in LA might speak Spanish at home and English at work. But in Beirut, “They're all Lebanese, talking with Lebanese, so why all this code switching?” Dimachki asks. “You’ll never see two French speaking to each other in German or in Spanish or Chinese, unless maybe there is a reason. But here, it’s a way of speaking in a sense.”

My friend Pia calls it “the bastard sentence that sums it all up.”