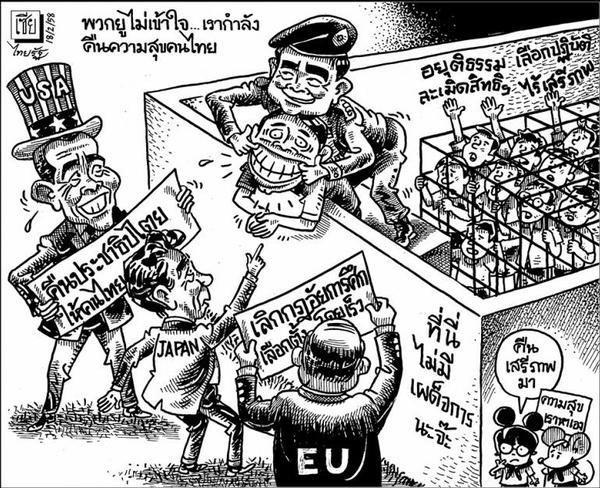 This cartoon by Sia features several countries urging Thailand to restore democracy. The response of the junta is this: “Y'all don't understand… We're returning happiness to Thai people.” The cartoon was widely shared on social media when Sia was “invited” by the army for “attitude-adjustment.” Image from @Thai_Talk.

Despite strict media regulation in Thailand, some political cartoonists continue to highlight the harsh impact of military rule on the country's freedom of expression.

The army grabbed power in 2014 and drafted an interim charter that became the basis in establishing a civilian government known as the National Council for Peace and Order. Prayut vowed to restore elections, but only after the military had completed the implementation of political and electoral reforms in the country.

Despite the lifting of martial law, protests are still banned [3] and some critics continue to be “invited” by the army for so-called “attitude-adjustment.” Last month, a veteran journalist was summoned [4] by the army for spreading “misinformation” about the junta.

Last October 4, political cartoonist Sia was interrogated [5] in an army office for “content in some of the cartoons that do not represent the facts.” Sia’s cartoons are published on Thairath, the biggest circulation newspaper in Thailand. The cartoon that was criticized by the junta refers to the speech made by Prayut at the United Nations General Assembly in New York.

The cartoon features Prayut affirming the government’s adherence to principles of human rights and free speech, despite the long list of abuses committed by the authorities.

Sia was eventually released but was told to stop “misrepresenting facts” in his cartoons. Below is an excerpt of Sia’s interview [10] with the media:

…they said that from now on, if they see that my drawings and cartoons do not represent facts, they will take legal action against me, and I will be held responsible.

One of those who expressed support for Sia was fellow artist Stephff, who is also editorial cartoonist for the Thai media outlet The Nation:

cartoon for the nation tomorow – I really hope they will publish this one in order to defend a fellow cartoonist pic.twitter.com/361acRVUGM [11]

Reacting to Sia's plight, Stephff went to town on Twitter, posting a string of artistic reflections on Prayut's rule. Many of Stephff’s cartoons are helpful in understanding and explaining how the coup and subsequent junta rule have undermined democracy in Thailand. For example, this cartoon shows army chief Prayut appointing himself as the country’s prime minister:

Stephff also parodied the junta's “attitude-adjustment” technique through a cartoon about Prayut's recent visit to the UN:

Meanwhile, this cartoon tackles the proposal of the government to filter and monitor Internet content by establishing a single gateway [20] for traffic into and out of Thailand, which critics have dubbed the “Great Firewall of Thailand”:

Prayut has said his government has managed to eradicate corruption, but this cartoon echoes the criticism of some analysts that the junta did not stop the corrupt activities of its allies:

Finally, this cartoon adopted the theme of the Hollywood animated film “Inside Out” to portray Prayut’s obsession with Thaksin, an ousted prime minister who now lives in exile in another country: