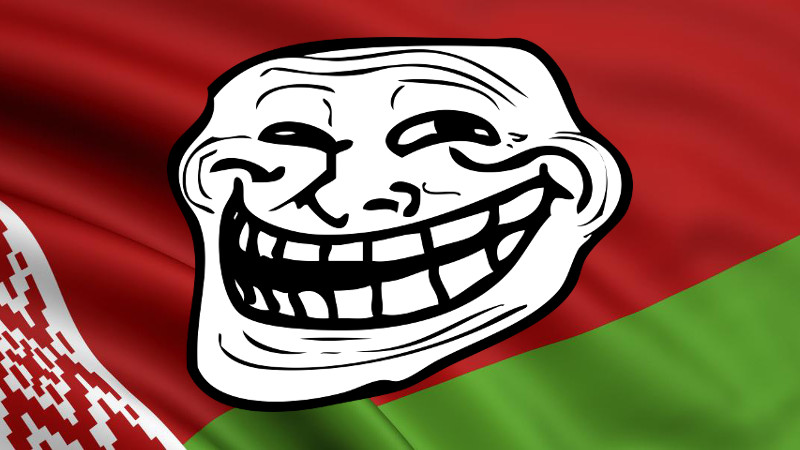 As the relations between Russia and the West soured over the ongoing crisis in Ukraine, Kremlin officials have been intensifying their information manipulation efforts. This summer for the first time the world found out about Russian troll factories—the secretive agencies that hire people to write and spread pro-Kremlin propaganda on the Internet.

It was in August of this year that journalists of the opposition newspaper Nasha Niva (Our field) first noticed that some users were praising the ruble, at the time when it was so unstable. The suspected trolls would write that they “believed in ruble” and that Belarusians would overcome all temporary difficulties: “Don’t panic! Everything's gonna be alright!” Journalists dutifully copied all the “suspicious” comments and published a collection of them on their website (many original comments have since been deleted after the “unmasking.”)

In general, the Belarusian trolls are seen using three main tactics. First, one should say that everything is alright and that any concerns about the issue are simply a sign of panic.

So you decided to spread panic? It's no use. There is enough currency in exchange offices. Buy it! And, by the way, everything in the country is under control.

Second, one should mention that Belarusians don't need dollars, because they spend their money in Belarus, not in the US.

What do I need this American currency for? I keep all my savings in Belarusian rubles. I live in Belarus, not in America.

And thirdly, always blame the West.

We all understand why the [Belarusian] ruble is falling: right now this is being instigated by external forces. And if the authorities held back the exchange rate today just for show, no one knows what the consequences would be by the end of the year. We've been through this… Why don't you go to the countryside instead, chill out… Because you'll just waster your nerves standing in line for the lousy 50 bucks.

Of course, there is no proof that these commenters are definitely trolls. But recently, the ElectBy election observation project received some evidence that there might indeed be a troll factory operating in Belarus. Anonymous users provided ElectBy with screenshots of e-mails that appeared to be sent by the pro-government Belarusian Republican Youth Union to its local chapters.

In these letters the sender writes to “dear colleagues” asking them to comment on certain news articles (links are provided) about an opposition rally. Commenters are expected to write that the calls to protests are a run-of-the-mill provocation and that those who did attend the rallies got themselves four-year prison sentences. Trolls are also asked to provide screenshots as proof of their “work.” “Grants are for provocateurs,” – says the letter's author, suggesting one way to comment on the articles. If we look at some of the comments about the recent opposition protest collected by Nasha Niva, it's easy to see that the most common words in the collected comments are “provocation,” “provoke,” and “provocateurs.”

What a bunch of drivel! People came and then they left! A regular provocation

The “troll” situation is becoming all the more fascinating since the Belarusian presidential election is drawing close. In one of the leaked letters, trolls are allegedly asked to comment on the pre-election manifesto of the current President Alyaksandr Lukashenka, published on the popular (politically neutral) news site TUT.BY. On one important condition—the comments should be “positive.” 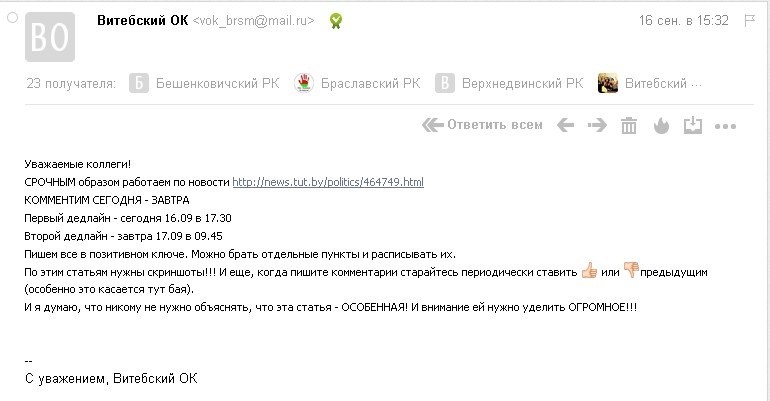 Write everything in a positive tone. Feel free to take up additional points and expand on them.
We need screenshots for these articles!!! And also, when you write the comments, try to vote the previous ones down or up (especially on TUT.BY)
And I hope I don't have to explain to anyone that this article is SPECIAL, so it needs your GREATEST attention!!!

Again, simply writing positive things about Lukashenka doesn't prove that these users are paid or organized trolls. But the TUT.BY readers also passed their sentence—all the favorable comments have been overwhelmingly downvoted. 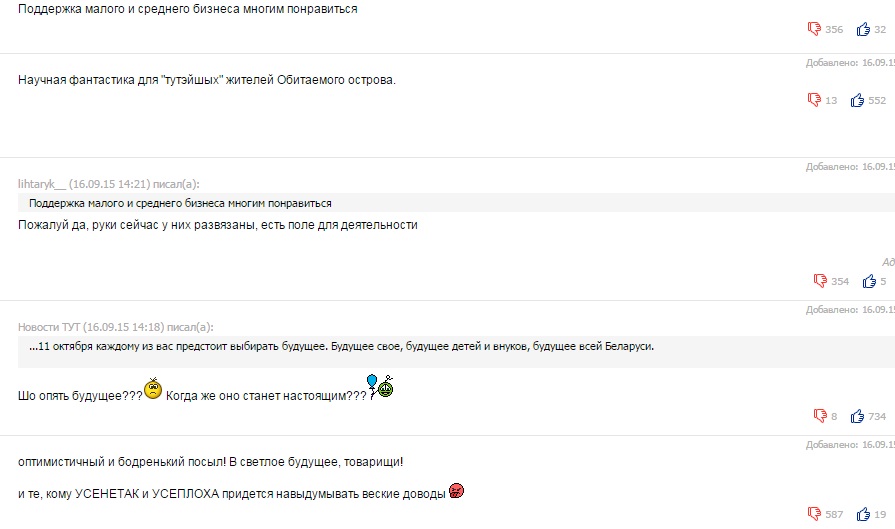 The next presidential election takes place this Sunday, October 11. There is no doubt that Lukashenka, who has kept his place at the top since 1994, will win again. After the election, the trolls’ activity will likely die down—the current (and probably future) president is known for his ability to rule the country with an iron fist, so manipulating public opinion in the online comments won't be as necessary. Still, the introduction of a “softer” means of impacting Belarusians’ minds points, perhaps, to a willingness to try new methods of influence and a more complicated politics at play in Belarus.