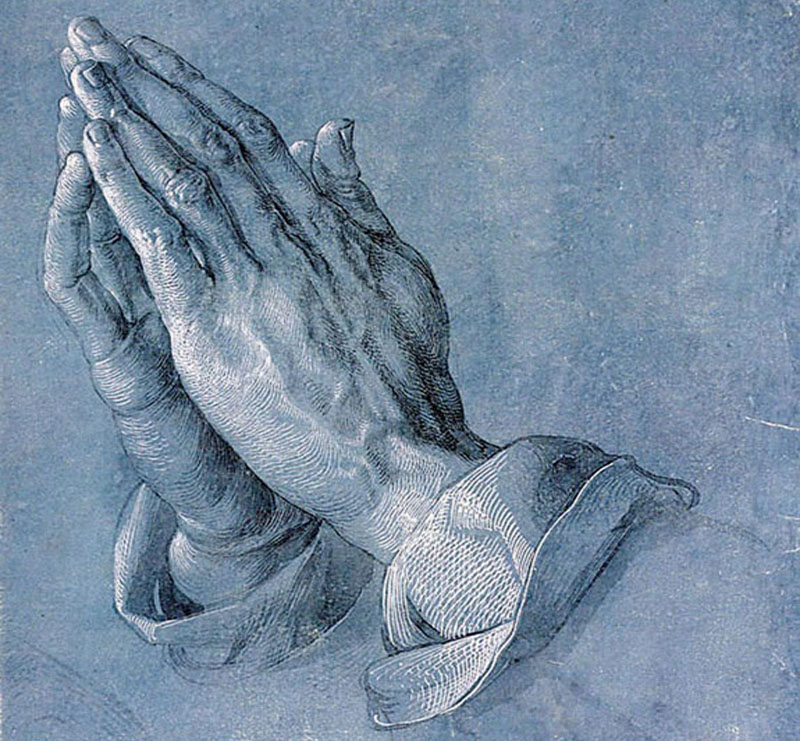 A photographic reproduction of Praying Hands, a public domain work of art by Albrecht Dürer.

The Zambian currency, the kwacha, which means “dawn” in some local languages, has in recent months rapidly depreciated against the United States dollar, the British pound and other major currencies. China's decreased demand for copper, reduced power supply [2] to mining and manufacturing industries and domestic consumers, and the government's alleged poor economic management [3] have all contributed to the currency's woes.

International business news wire service Bloomberg [4]recently labelled the kwacha, which was rebased by the current ruling government [5] a few months into office, as the worst performing currency on the international market.

Faced with such a bleak situation, President Edgar Lungu has called for national prayers and fasting [6] on October 18 to ask God to intervene in the country's many issues of the day. Announcing the day of prayer, the Presidential Palace public relations office stated:

The President stated that the decision was inevitable in view of the many challenges that the country was faced with among them: socio-economic; disrespect for elders and a near absence of civility in discourse; high unemployment levels among the youth and high poverty levels, Kwacha depreciation including load shedding due to the power deficit.

Taking a cue from this, about 50 pastors from Zambia’s second city, Kitwe, gathered under the Kitwe Pastors’ Fellowship to pray for the strengthening of the kwacha.

One of the pastors, Kautemba Phiri, is quoted by many citizen media websites such as the Zambian Eye as having told the gathering [7]:

Let us all get our kwacha notes and pray for this money so that it gains value. We should pray that the kwacha gains the much-needed strength against other convertible international currencies”

‘Pastors, please spare us your drama’

Commenting under the story, reader Ulukungu mu Zambia wrote (comments have no permalinks):

Praying for a currency to improve means you don’t understand economics.The depreciation of the Kwacha is not the devils work. If anything exporters are supposed to take advantage of this to export more products. The nation should be asking itself why it imports more than it exports.it’s actions towards addr[e]ssing the situation that are needed not prayers for miraculous Kwacha appreciation

Cry my beloved country! Problem in Zambia is most of the so called clergymen are just grades 7, 9 or 12 failures or school drop outs. And what do you expect from a bunch of failures who can’t see beyond their noses? You are asking too much from God you! Leave God out of this!

When did a currency improve because of prayers?

Inkoko poked fun at the pastors:

“Oh lord please make the Kwacha strengthen to K2 per dollar like in 1964 when Welensky’s rule bequeathed us a strong Kwacha. Please lord also make the potholes on our roads dissappear and let their be streetlights in all our cities sorry, towns too villages too.Let there be street signs everywhere in Zed [Zambia], a christian country that believes that manna can fall not only on Israelis but zedians too. Lord also let Kariba dam [the main source of electricity in Zambia. The country is currently experiencing loadshedding] operate at full capacity and let Kanyama [a township in the capital citz] have drainage so that cholera dissappears during the rainy season.Lord please let Kambwili start speaking sense”
AMEN

Pastors, please spare us your drama.

‘Bank notes are not the economy’

Blogging about the event, Conrad Mbewe, a Baptist pastor, explained what bothered him [8] about the prayer:

What bothered me was when I read that each pastor was asked to pull out a kwacha note from his pocket and raise it in the air during the prayer meeting. While other pastors were praying in tongues others were now prophesying that the currency should appreciate in three months.

Whereas many people responded in the comments column and simply called this a joke, I responded to the person who sent me the link saying that this was witchcraft. Since the query was on Facebook, someone else asked, “How is this witchcraft?” Here is my answer.

Bank notes are not the economy

As I have already said, there is nothing wrong with people getting together to pray for the Zambian economy. Prayer is basically a humble acknowledgement that we desperately need God to intervene in our situation. So, I commend whoever initiated this—up to that point.

The thought that simply by pulling money out of our pockets, raising it in the air, collecting it in a basket and putting it on some imagined “altar” is what is going to turn the economy around belongs to the world of witchcraft and not to the world of biblical Christianity.