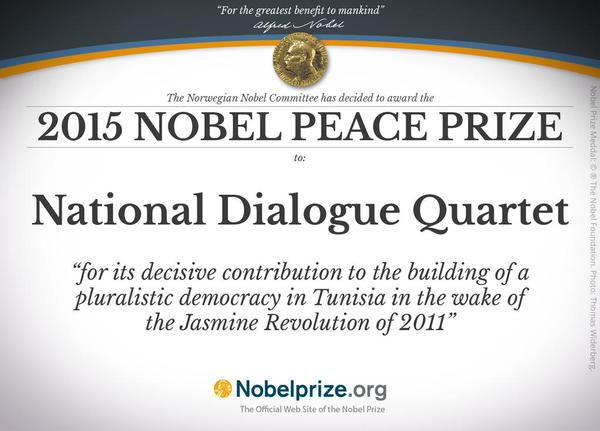 The Tunisian National Dialogue Quartet won this year's Nobel Peace Prize “for its decisive contribution to the building of a pluralistic democracy in Tunisia in the wake of the Jasmine Revolution of 2011.”

Tunisians are over the moon their democratic progress was recognised by awarding the National Dialogue Quartet the Nobel Peace Prize today. The quartet, made up of civil society organisations, played a pivotal role in mediating between different factions of Tunisian society as it transitioned into a full-fledged democracy, following the overthrow of dictator Zeinalabideen Ben Ali, during the Tunisian revolution.

Tounsiahourra (Free Tunisian) conveys the feeling of pride and happiness to her 110K followers on Twitter saying:

My mother, who has not ululated in a decade, ululated today for the Nobel Peace Prize, like a lady who had missed someone who was missing and who suddenly turned up. It is a feeling of justice I totally understand

It's the happiest day of my life

According to the Nobel Prize committee:

The Quartet was formed in the summer of 2013 when the democratization process was in danger of collapsing as a result of political assassinations and widespread social unrest. It established an alternative, peaceful political process at a time when the country was on the brink of civil war. It was thus instrumental in enabling Tunisia, in the space of a few years, to establish a constitutional system of government guaranteeing fundamental rights for the entire population, irrespective of gender, political conviction or religious belief.

the Quartet exercised its role as a mediator and driving force to advance peaceful democratic development in Tunisia with great moral authority.

The prize comes at a great time for Tunisia, rocked recently by an attack on the Bardo Museum in the capital Tunis in March, which left 22 people dead, followed by another deadly attack on a resort in Sousse, in June, which killed 38 tourists.

Tunisia was the first Arab country to usher in widespread pro-democracy protests, in December 2010, which created a Domino effect as other people across the Arab world rose, toppling regimes around the region. It is also the most successful revolution in the region, culminating with a democratic presidential election which brought 88-year-old political veteran Beji Caid Essebsi from Nida Tounes as president last year.

Around the world, many celebrated the award. The Arabic hashtag #تونس_تفوز_بنوبل_للسلام which translates to Tunisia Wins the Nobel Peace Prize became a trending topic in the United Arab Emirates in no time, with many joining the choir to celebrate Tunisia's victory:

2,018,597 people could have seen #تونس_تفوز_بنوبل_للسلام since its 1st mention until it became a Trending Topic. #trndnl

Egyptian Nervana Mahmood tweets to her 46.9K followers on Twitter:

Thrilled for Tunisian people. Dialogue, inclusiveness,democracy & respect for human rights is the only way #NobelPeacePrize

They did not interfere in Tunisia, so the there was reconciliation and peace. Congratulations Tunisia!

But for some, the award is an empty gesture, regardless of who wins it.

Dima S., who identifies herself as an Arab Middle East observer, expressed her skepticism over the award, even before the results were announced:

In 1 hour, announcement of #NobelPeacePrize. Where hospital bombers, war criminals and sectarian civil war enthusiasts can also get a prize

Mabrouk (congratulations) Tunisia and all the Tunisians who believed in peace!