The Dark Side of Hydropower in Bhutan 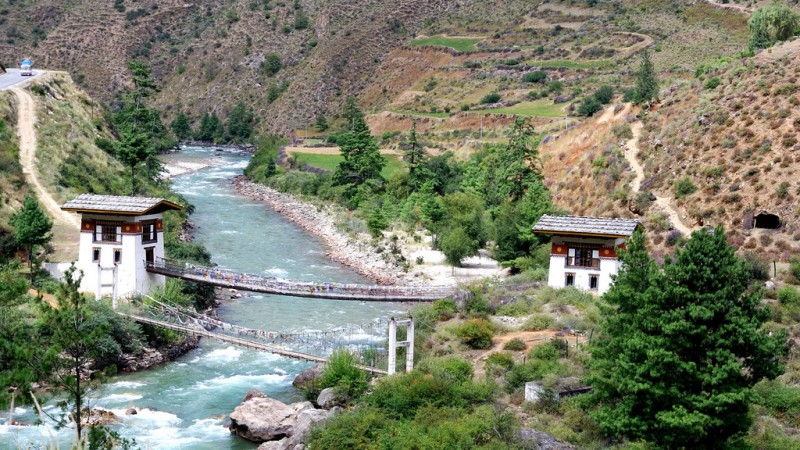 Bhutan is land-locked and overloaded with steep mountains crisscrossed by a network of swift rivers. All this water is ideal for generating electricity, and the country's hydropower potential is estimated to be nearly 24,000MW, though just 6 percent is currently produced by Bhutan's five hydroelectricity projects.

Close to 75 percent of all electricity generated in Bhutan is exported to its energy-hungry neighbour India. However, barely 66 percent of Bhutanese households and 39 percent of its villages are electrified. Electricity revenue has provided more than 40 percent of the government's entire income in recent years and constitutes 25 percent of its GDP. Another 25 percent of the country's GDP is based in the construction of further hydropower infrastructure. Bhutan aims to increase its hydropower capacity to 10,000MW by 2020.

According to the World Bank, Bhutan’s hydropower projects have enjoyed being viewed as largely risk-free. The Bhutanese government opted for rapid hydropower investment through heavy borrowing, which has not caused much concern until recently. In 2007, Bhutan boasted of second fastest growing economy in the world with an annual growth rate of 22.4 percent, thanks mainly to the commissioning of the gigantic Tala Hydroelectric power station, the country's biggest hydropower project currently operating.

Last April, International Rivers has published a status report on Bhutan's hydropower projects, showing five projects in operation, six projects still under construction, and five new projects that have been proposed. Combined, the projects are responsible for a significant amount of external debt for the Bhutanese economy, which is one of the smallest in the world. In 2015, Bhutan's debt also exceeds the size of its entire economy by 12 percent.

A report called, ‘The New Debt Trap’ released by the Jubilee Debt Campaign, a UK-based company has categorized Bhutan as a country with ‘high risk of government debt crisis’. The report lists Bhutan among 14 other nations that are fast heading towards a debt crisis.

In a series of posts titled “The Dark Side of Our Hydropower Projects,” where he discusses issues related to Bhutan's hydroelectricity projects, Dorji writes:

Today, the hydropower bubble has burst and our dreams remain dashed and hopes unfulfilled. We find ourselves straddled with hydropower borrowings that is in excess of our entire GDP and yet, we still dare tread the quicksand of debt and disaster, with aplomb and gallantry!

Our leaders seem to draw solace from two magic words that they keep throwing at us – “Cost-Plus” and “Self-liquidating”. They must take us for complete dullards, or they are clueless about the mathematics behind those catch phrases.

Blogger Wangcha Sangey thinks the region's future electricity market isn't what should worry Bhutan. He says the high cost of infrastructure and production is the real problem, threatening to raise the national debt even higher:

What is dangerously worrying is the ridiculously huge escalation in cost of construction and prolonged time taken to complete the ongoing hydro projects. Both the costs and duration seem to be heading towards doubling of money and time. Costs may even triple. By the time these projects are completed, the 10% interests on the 70% loan component and the principal itself would have bloated to such an extent that even after every project is streamed on line, Bhutan may be forced to raise money from different sources to meet loan repayment instalments.

Bhutan has been praised as a global leader in environmental protection, but that reputation is coming into question lately. Due to heavy construction at various hydro projects, thick clouds of dust have covered several Bhutanese towns. Most of the jobs created by hydropower are in construction, which is generally unattractive to educated young Bhutanese, though youth unemployment rates remain high. Roadsides throughout the country host shantytown settlements of thousands of migrant construction workers.

Yeshey Dorji says there are other perils of hydroelectricity projects that are often ignored:

Most of our life-sustaining rivers are shackled with hydropower dams, displacing humans and wildlife, as well as rare and unknown aquatic life forms.

Some of the dams that are planned and under construction are destined to create huge water bodies that will alter weather patterns and cause earthquakes, due to their location in seismically active zones.

There is clear and present danger of environmental disaster waiting to happen.

Unfavorable and inequitable terms of project execution have caused a number of Bhutanese businesses to fail. Even vegetable vending has been usurped by Indian project contractors thereby depriving Bhutanese of small business opportunities.

Hundreds of children born out of wedlock to Bhutanese mothers but fathered by Indian project workers, roam the streets – without census registration and without the right to schooling. Because our gender biased laws do not recognize Bhutanese mothers as worthy citizens, their offsprings are not recognized as natural citizens of Bhutan.

Dorji argues that Bhutan needs at least one free-flowing river, to serve as a conservatory for various known and unknown members of the country's aquatic gene pool. He's also launched a petition to ban hydroelectric projects in the Chamkhar Chhu River.

Despite the monumental losses of money and opportunity, the government is still in a huge rush to do more projects. Why can’t we wait for the projects in the pipeline to be finished and commissioned?

Shripad Dharmadhikary at International Rivers also sounds a note of caution, recommending a pause to consider the environmental impact of Bhutan's rapid development of hydropower:

While hydropower would remain an important component of its economy, Bhutan should think about whether it’s useful to pursue further aggressive development of hydropower – at great cost to its ecology and people – for pursuit of revenues, about which concerns are being raised in terms of overdependence on one source, about whether it is meeting the needs of job creation, and which in any case does not seem to address winter shortages. Bhutan should pause and think whether it makes more sense to explore other options for revenue generation, job creation and overall development that will allow the preservation of its rich ecological heritage.