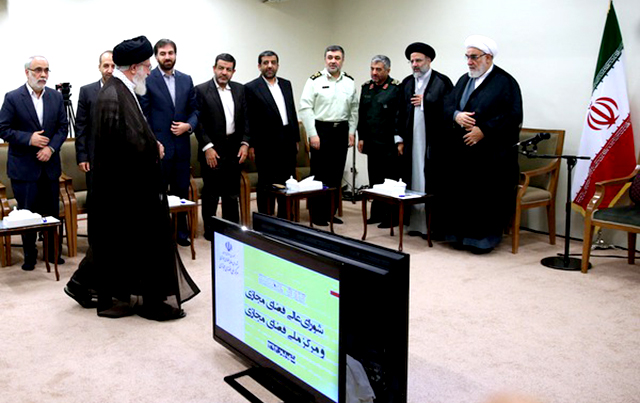 On September 5, 2015, Ayatollah Ali Khamenei re-appointed the members of the Supreme Council of Cyberspace for another four-year term. Image from ICHRI.

This article was written by Small Media researcher Kyle Bowen. To find a longer and more detailed version, see the original report on Medium.

A few weeks ago, the International Campaign for Human Rights in Iran (ICHRI) published an article on personnel changes that would change the power structures on the Internet in Iran. The piece focuses on Supreme Leader Ayatollah Khamenei’s recent announcement that authority over Internet policy in Iran will be concentrated in the Supreme Council of Cyberspace (SCC), a body created by the Supreme Leader back in 2012.

ICHRI’s framing of the moderate Rouhani government’s efforts to ease restrictions on the flow of information against hardliners vying for more Internet controls lays bare the institutional tensions in Iranian internet policy.

The issue of so-called “smart filtering” puts these tensions on full display. As ICHRI points out:

Hardliners have consistently pushed for the blanket blocking of full sites of which they disapprove. The Rouhani administration, in a move tech experts have noted was a bit disingenuous given its technical infeasibility, argued that a more selective ‘smart filtering,’ in which only objectionable content is blocked, would be sufficient to weed out offensive material, allowing sites to otherwise operate.

Indeed, Rouhani’s ICT Ministry has consistently championed “smart filtering.” Yet as ICHRI observes, technical challenges make this approach difficult to implement — smart filtering only works on websites or apps that don’t use HTTPS to encrypt data.

Another great merit of the article is that it highlights conservative policy initiatives such as the condemnation of Western social media platforms, a push toward data localisation requirements, a drive to strengthen domestic social networks to attract more users, and a predilection for limiting internet speeds. By covering these important issues, ICHRI paints a detailed picture of the challenges facing Iranian netizens.

What do Changes in the Supreme Council of Cyberspace Mean?

Alongside the strengths discussed above, there are a few claims mentioned in the article that differ with our interpretation of recent events and what they mean for future Iranian internet policy.

1) The Council’s “newcomers” are old faces

In its article, ICHRI mentions that Khamenei’s reforms would see an expansion of the Council’s membership:

In the re-appointment letter on Khamenei’s website, he also announced three new members to the Supreme Cyberspace Council, of which two, Reza Taghipour and Seyed Ezatollah Zarghami have been designated by both the US and the EU as human rights violators and sanctioned as such.

ICHRI is absolutely right about the sanctions, but neither of these two men is new to the Council. Both Taghipour and Zarghami were already on the council at that time. Taghipour was first placed on the council in his official capacity as ICT Minister, but was then appointed to the council by Khamenei when he left the Ahmadinejad government in late 2012. Zarghami also sat on the Council in his official capacity as the Director-General of state broadcaster Islamic Republic of Iran Broadcasting (IRIB). When he was replaced in that role, Khamenei then directly appointed him to the Council.

Moreover, the man who replaced him as IRIB Director-General, Mohammad Sarafraz, has been on the Council since 2014. At that time, he was a direct appointee of Khamenei. In other words, Taghipour, Zarghami, and Sarafraz were all already on the council at the time of Khamenei's statement, and all three remain on the council today.

The visualisation below shows how the composition of the SCC has changed as a result of the newly-announced reforms. As the visualisation illustrates, the number of Rouhani-nominated cabinet ministers in the group has actually increased somewhat, and it’d be fair to say that the system has received less of a radical overhaul than it has a minor reshuffle. 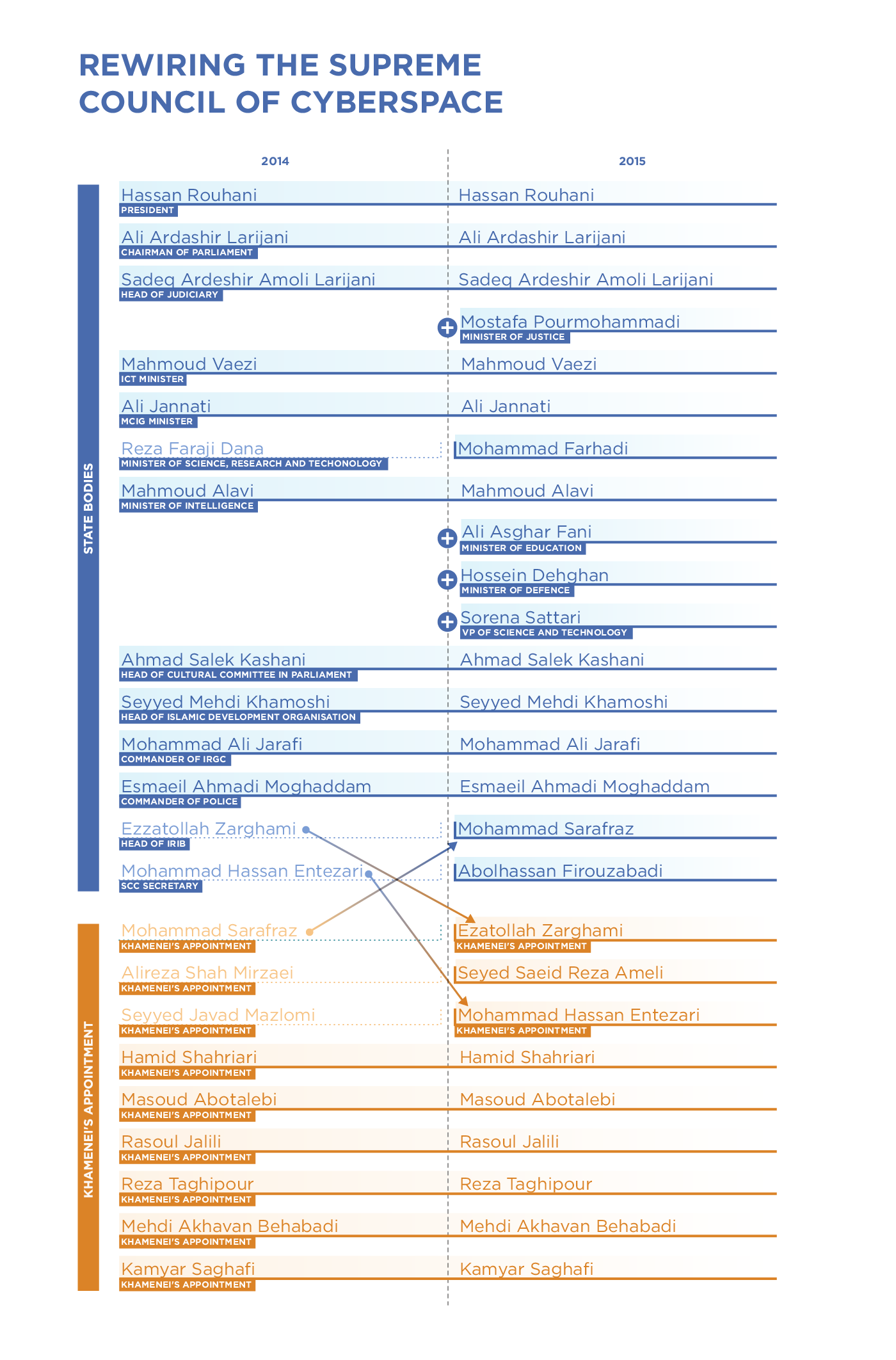 2) No Political Change on the Council

Contrary to what the ICHRI report argues, Khamenei’s changes actually increase the number of representatives from Rouhani’s cabinet. Indeed, of the new departments added, two are headed by moderates-reformists (Education and Defence), one by a conservative (Attorney General), and while the affiliation of the Vice President for Science and Technology is unclear, it is reasonable to assume that he is relatively moderate, as he was appointed directly by Rouhani, without the requirement for parliamentary approval.

In other words, it’s possible that Khamenei’s changes actually increased the number of moderates on the SCC. However, It’s important not to overstate this point. In the Iranian context, terms such as ‘moderate’ and ‘conservative’ are vaguely-defined labels that aim to give a sense of a politician’s ideological affiliations, and are sometimes open to debate. The categorisations mentioned above have been assigned by Small Media based on our assessment of their records.

3) Rouhani may stand to gain

Small Media is not convinced that concentrating Internet policy decision-making powers in the Supreme Cyberspace Council necessarily marginalises the Rouhani administration. On the contrary, it was through his position as SCC Chairman that Rouhani launched one of his most consequential interventions into a public debate about internet censorship.

When the Committee to Determine Instances of Criminal Content (CDICC), a body that oversees filtering actions, sought to block WhatsApp, Rouhani asserted his authority as SCC Chairman and publicly opposed the proposed block. After a tense standoff between Rouhani’s ICT Ministry and CDICC Chairman Abdolsamad Khoramabadi, the latter eventually backed down, and WhatsApp remained unblocked in Iran.

As for the parallel bodies to be dissolved, Khamenei didn’t offer any specifics, and we may have to wait until the next high profile fight over internet policy to see how any new institutional tensions play out.

It is certainly possible that powerful conservatives like Khamenei will attempt to cut the Rouhani government out of the internet policy process in the future. However, we’d argue that Khamenei’s recent statement on the SCC was not targeted to that end.