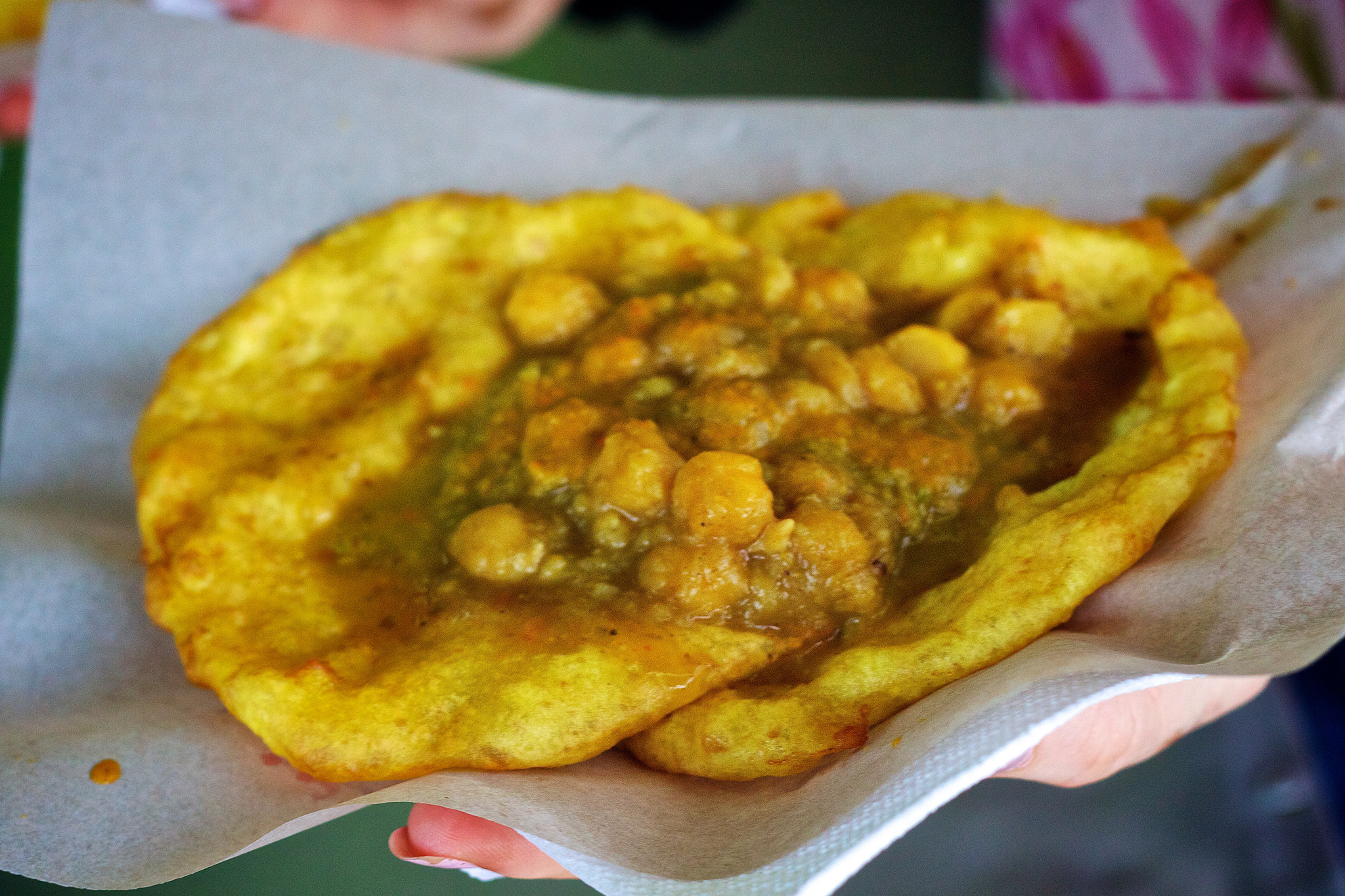 “Trinidad doubles is one of the best street food you can get in the world…” Photo by Edmund Gall, used under a CC BY-SA 2.0 license.

Trinidad & Tobago street foodies are in crisis. After the country's new finance minister presented the 2015/16 budget in parliament last week, announcing an immediate hike in gas prices, there was concern that the increase would trigger higher costs in other areas. One day after the budget presentation, taxi fares rose. Fair enough.

But all hell broke loose when doubles vendors—the sellers of the nation's most beloved breakfast food—announced that the flatbread (called “barra”) filled with chickpeas (called “channa”) would now be sold at TT$5 (US$0.79)—a one dollar increase, despite the fact that the raw materials cost has remained the same.

There was an immediate uproar online and on social media. Satirical website Wired868 was all over the issue:

The 48-year-old Mahase Kanhai, who, curiously, claims to have been a doubles vendor for the past 35 years, will be remembered for throwing the first blow.

“It was $4 but we had no choice but to increase the price (to $5),” Kanhai told the Trinidad Guardian. “We added the cost of everything and with the passing of the budget… Gas gone up so everything will also go up soon.”

It was the combination of simplistic economics and ruthless capitalism that has characterised local ‘businessmen’ for time immemorial.

Of course, even at $5, doubles remains the cheapest way to simultaneously satisfy your appetite and clog your arteries in this country. But it is the principle of the thing.

“The principle of the thing” is exactly what seems to be pissing people off. Facebook user Franka Philip explained:

I think people are missing the point of the doubles outrage. It's the perception of opportunism that people are more upset about than the actual price rise. Believe me, if flour and oil had gone up everybody would have been in solidarity with the doubles vendors.

Wired868 took the opportunity to point out the hypocrisy of the “principle” argument:

There was no principled stance against Movie Towne, although they tore down the mangrove to erect it. None against TV6 for its shameful broadcast of ex-National Security Minister Martin Joseph’s lifeless body.

And no boycotts of Centre of Excellence although—despite building the venue with FIFA, CONCACAF and TTFA money—the facility manager refused to let one of the most gifted Trinidad and Tobago National Under-17 football teams in recent memory train there, two years ago.

Not all doubles vendors are raising prices

‘We’ve been trying to keep the prices down for a long time,’ said Krishna Harrypaul, a popular doubles vendor who operates along the East-West corridor. ‘We started to brush our barra with gold dust in order to get that golden look that consumers know and love, but now with the increase in super and diesel, our costs have gone up too […]’

When asked if it would just be simpler not to infuse their barra with gold in order to keep the price, Mr. Harrypaul said ‘That’s a brilliant idea, but then we will have to use extra diamonds in the special sauce to compensate for taste.’

LoopTT was optimistic, however, posting the locations of several other doubles vendors across the country whose message was to “have no fear” about a price increase:

Hassanali's (Montrose, Chaguanas)
‘Increasing the cost of doubles will do nothing for our business but drive away customers. We are not raising the cost.’

Jack and Marlene's Doubles (Aranguez Main Road)
‘We have NOT raise the price of our doubles just yet. Doubles is still $4 and triples $5.
However, in the future if cost of production(raw materials) increase, we will have to increase. In that case you all will be notified.’