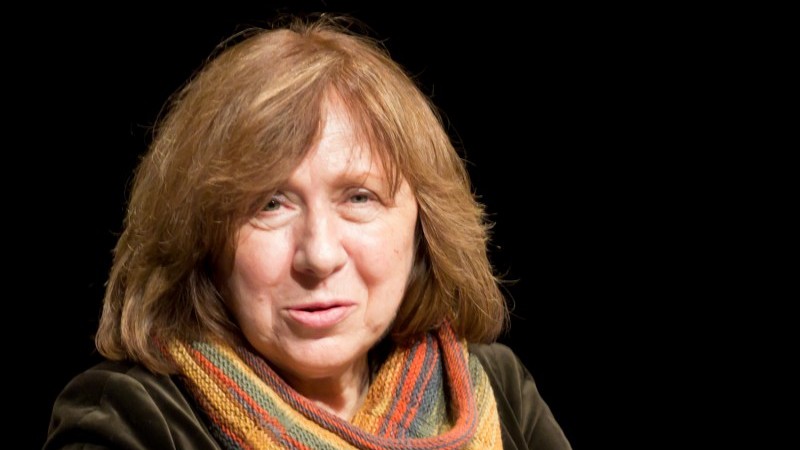 Svetlana Alexievich, winner of the 2015 Nobel Prize in Literature. Image from Wikimedia Commons.

The Nobel Prize in Literature for 2015 has been awarded to the Belarusian author Svetlana Alexievich. The Swedish Academy, which awards the prestigious prize, commended Alexievich “for her polyphonic writings, a monument to suffering and courage in our time.”

BREAKING NEWS The 2015 #NobelPrize in Literature is awarded to the Belarusian author Svetlana Alexievich pic.twitter.com/MABhwFJ8Lu

A Belarusian author writing in Russian and an investigative journalist, Alexievich has been praised for her documentary reports depicting life and war in the Soviet Union and in the post-Soviet era, based on many in-depth interviews. She is the 14th woman to win one of the 111 awarded Nobel Prizes for Literature, and the first Russian-language author to be granted the honor since 1987, when poet Joseph Brodsky received the prize.

Sara Danius, permanent secretary of the Swedish Academy, told journalists on October 8 at the announcement of the award in Stockholm that Alexievich “has offered us new historical material and she has offered us a new genre.” Wall Street Journal also highlighted the writer's more current work, calling her “a vocal critic of her country’s leader and a prominent voice against Russia’s involvement in Ukraine.”

Alexievich's works, mixing fiction and documentary prose to convey emotional stories of the role of women in World War II and the Chernobyl disaster based on witness accounts, have been translated into many languages and won international awards. But her books are not published in her home country, Belarus, ruled by long-standing president Alyaksandr Lukashenka, due to a continuing crackdown on free speech and pervasive censorship.

Alexievich herself has lived most of her life in various European countries, traveling there on writers’ scholarships. She has openly criticised Lukashenko's tight grip on Belarus, including the country's horrible human rights record and the continued use of the death penalty.

Speaking at a press conference in Minsk, Belarus shortly after the award was announced, Alexievich said she was “not a barricade person,” but that the current political climate in Belarus “drags us to the barricades, because what's happening is shameful.”

Chronicling the horrors and difficulties of life in the various historical crises in the first person through the words of witnesses, Alexievich has seen her “investigative reports” become a favorite of the critics. The Swedish Academy applauded the writer's commitment to preserving the voices of her sources and said that “[B]y means of her extraordinary method – a carefully composed collage of human voices – Alexievich deepens our comprehension of an entire era.”

Svetlana Alexievich, who is now 67, began recording audio accounts of women soldiers who took part in World War II while working as a young local newspaper reporter in Belarus the 1970s. The accounts resulted in her first book, “War's Unwomanly Face.” For a long time, it was barred from publication as it focused on personal histories and did not emphasize the role of the Communist state, and only saw print in 1985.

Alexievich continued to use the first-person testimonies approach when she documented the Soviet invasion of Afghanistan and recorded the grief-laden accounts of the mothers who lost their sons in the conflict in her next book, “Zinky Boys.” “I need to catch a person at a moment when they have been shaken up,” Alexievich told Russia's Ogonyok weekly magazine in 2014. “My ear is always out on the streets.”

The writer and reporter then turned her attention to the Chernobyl nuclear disaster, which, although it happened in Ukraine in 1986, affected Belarus more than any other country, since the site was so close to the border. In 1998, she published “Voices From Chernobyl,” a collection of haunting accounts from people who had worked on the nuclear clean-up in the aftermath of the disaster. Many of her interviewees have since passed away, and their voices now remain in her writing.

Alexievich says it's a shame the characters from Voices of Chernobyl aren't around to hear about her Nobel Prize. pic.twitter.com/kfmNRwKsBb

Alexievich's most recent book, “Second-Hand Time” (2013), is her latest non-fiction work examining the legacy of the Soviet mindset over 20 years after the collapse of the USSR, and is the latest in her grand cycle of books, “Voices of Utopia,” where life in the Soviet Union is depicted from the perspective of the individual.

Our main capital is our suffering. This is the only thing we're constantly mining. Not oil, not gas, but suffering. I suspect that it is that which draws, and repels, and surprises the western reader in my books.

The author has drawn criticism from the Belarusian intellectual elite for writing in Russian, and not in the Belarusian language, going against the grain of a strong drive to revive national culture and language in Belarus. Alexievich herself has said that “there is more European” in her biography than either Russian or Belarusian.

“I consider myself a person from the Belarusian world, from Russian culture, and a cosmopolitan of the world,” Alexievich says.

Svetlana Alexievich was born 31 May 1948 in the Ukrainian town of Ivano-Frankivsk, to a Belarusian father and a Ukrainian mother. When her father had completed his military service, the family moved to Belarus, where both of her parents worked as teachers. After finishing school, Alexievich worked as a teacher and as a reporter, and studied journalism at the University of Minsk in 1967-1972. She currently resides in Minsk, where she returned after living in Europe to work on her new book.