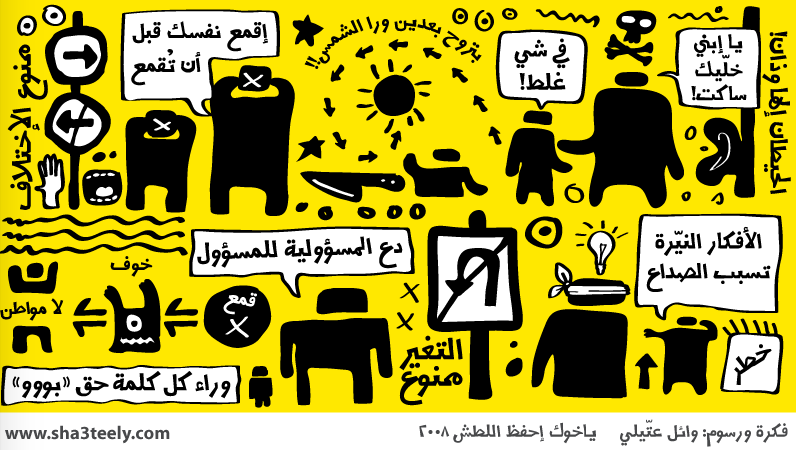 A chart by Jordanian satirist Wael Shateely criticising the crackdown on freedom of speech in the region. The quotes read: “It's best to keep quiet,” “Oppress yourself before you are oppressed,” “Leave responsibility to the officials,” and “Enlightened thoughts cause headaches.” source: www.sha3teely.com

Two Lebanese Facebook users found themselves sentenced to prison for posts they wrote on the social networking site.

On October 6, 2015, political activist Michel Douaihy was released after being detained for nine days over a Facebook post. In his post, Douaihy criticized what he described as special treatment afforded to Salafi fugitive Ahmad Al-Assir during his arrest. The Lebanese cleric Ahmad Al-Assir was arrested in Beirut International Airport on August 15, after being on the run for two years. Al-Assir went into hiding after creating an armed militia in Saida in southern Lebanon and ordering his men to open fire on a Lebanese Army checkpoint in June 2013. Al-Assir tried to escape to Nigeria via Cairo, using fake Palestinian identity papers. Many activists criticised how Al-Assir was “pampered” during his arrest, and not beaten up the way activists are sometimes abused.

Douaihy (left) and Nazzal. Both images taken from Facebook.

The General Security office was the official governmental body that arrested Douaihy, they charged him with incitement of sectarianism, libel, and defamation. These are the same charges that led to the sentencing of journalist Mohammad Nazzal of Al-Akhbar newspaper. Nazzal was sentenced to six months in prison and a fine of US $633.

Although Douaihy was released, he was indicted under Article 386 of the Lebanese penal code that criminalizes libel and defamation against the president, other public officials, and private individuals. Douaihy was sentenced to two months in prison. However, this period was substituted by the nine days he had already spent in jail and a fine of USD $200.

A copy of the indictment of Michel Douaihy

Twitter users launched a #FreeMichelDouaihy hashtag to raise awareness about his case. Supporters also used the Article 13 hashtag, in reference to the Article 13 of the Lebanese constitution that guarantees freedom of expression and freedom of the press “within the limits established by law.” Lebanon's current press law (written in 1962) offers no explicit protections for journalists or bloggers. Along with the online campaign, Douaihy's friends and family protested in front in his home town Zogherta, in the north in Lebanon.

“In pictures, protests in Zogherta against the arrest of Michel Douaihy.”

Since 2009, more than 15 bloggers and/or activists have been arrested, interrogated and threatened in Lebanon because of something they wrote online. Mohamad Najem, a Lebanese human rights advocate and co-founder of Beirut's Social Media Exchange, tweeted in support of Michel Douaihi:

I don't know Michel, but everyone has the right to freely express their opinions on Facebook or any other channel #Free_Michel_Douaihi #Beirut

Today it is Michel Douaihi, who will it be tomorrow?

Similarly to Douaihy, journalist Mohammad Nazzal was sentenced in absentia to six months in jail and a fine of US $633 over a post he published on Facebook two years ago that contained the sentence: “the judicial system is as low as my shoes” (‫#‏القضاء_وصرمايتي_سوا‬), which was grounds for libel and defamation. Nazzal tweeted about the sentencing:

My lawyer told me today, that the penal court in Beirut sentenced me in absentia to 6 months in jail… FINE! :)

Journalists and bloggers in Lebanon and the Middle East expressed on social media their support to Nazzal:

I am a journalist, regardless of my opinion towards my colleague Mohammed Nazzal’s status, I refuse oppression of speech, and I demand that the lawsuit filed against my colleague be dropped as soon as possible. And for the assurance of his freedom to express his opinion, without exposing him to any prosecution. If a mere social media post will lead to one’s prosecution, then let us all be prosecuted. #We_All_Are_Mohammd_Nazzal #With_FreeSpeech

I am a journalist, regardless of my opinion towards my colleague Mohammed Nazzal’s status, I refuse oppression of speech, and I demand that the lawsuit filed against my colleague to be dropped as soon as possible…

Journalist Ghassan Saoud published on his Facebook page a statement in support of Nazzal, whom he described as:

Mohamed is a journalist who was never bribed or compromised.

Saoud pointed out that this attack on Nazzal is beyond an attack on freedom of expression, it is a politically orchestrated personal attack against Nazzal and the kind of journalist he is.