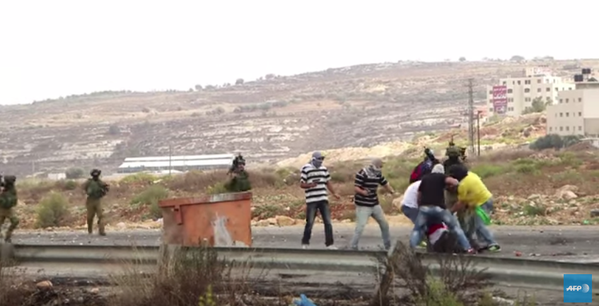 The undercover Israeli “protesters” seen pointing guns at Palestinian protesters in a still from a video taken by AFP and shared on YouTube today. Still shared by @joeyayoub on Twitter

Footage showing Israeli soldiers dressed as Palestinians in a protest has surfaced online. The video, taken by news agency AFP [2], reportedly shows a number of undercover Israeli soldiers throwing rocks at Israel Defense Forces (IDF) troops alongside Palestinian protesters outside Beit El, in the occupied West Bank. One of the undercover soldiers is even carrying a Hamas flag.

The soldiers are then seen bringing out their guns and shooting at the protesters who attempt to flee. While most others flee, a protester is seen being beaten on the ground by the undercover soldiers who are soon joined by their comrades, seen in uniform. The video also shows a protester in a black t-shirt taken by the IDF and left on the floor, injured.

According to AFP, three protesters were injured by the IDF in this incident.

The following video shows one of the undercover soldiers shooting a protester in the leg.

According to Al Jazeera [3], quoting an Israeli Army spokesman, “around 350 Palestinians had clashed with Israeli troops near the [Israeli] settlement of Beit El. She said Israeli soldiers were attacked with molotov cocktails and rocks, and the two wounded were taken to hospitals.”

Today's flare up happened hours after two stabbing incidents [4] in occupied East Jerusalem and the Israeli city of Kiryat Gan. Clashes between Palestinians and Israeli settlers — residents of Israeli settlements built in occupied areas of Palestine that the international community considers to be illegal — have been ongoing for three weeks following recent skirmishes at the Al-Aqsa Mosque compound and the surrounding Old City.

Fadi Arouri shares more photographs on both Facebook [5] and Twitter of the same incident in which the Israeli infiltrators were involved:

A combination of pictures shows Israeli undercover unit attacks palestinian protesters and arresting 3 of them, one of the protesters shot from a close distance in the head. this is during clashes near DCO / Beit Eil Checkpoint in the north of Al-Bireh city in occupied west bank

Diana A. describes another video of the same incident, shared on Facebook by Shehab News Agency [11], as “sickening”:

This Shehab News Agency video [11] has been viewed more than 60k times and counting.

According to Israeli newspaper Haartez [16], settlers were involved in the incident:

Two Palestinian youths were reported injured, one seriously, by live fire from IDF troops and settlers east of Bethlehem on Wednesday morning. It is not known at this stage whether the youths were hit by fire from the IDF or settlers.

The incident occurred when settlers joined soldiers in attempting to clear stone-throwing Palestinians from the road leading to the settlement of Tekoa.

At least three were seriously injured and then kidnapped by IOF and undercover special agents (Musta’ribeen) during a protest that was headed towards the Beit Eil military checkpoint east of Ramallah on Wednesday afternoon.

Sources said that the armed masked special agents have opened fire, alongside the IOF, on the protesters. The demonstration was launched from Birzeit University near Ramallah, and was headed towards the Beit El military checkpoint north Ramallah.

One of the three wounded was shot in the head, and dragged down by the soldiers. There are unconfirmed news on his death as his injury is highly critical.