Syrian Refugees? Get Your Facts Straight Before You Share Their Stories 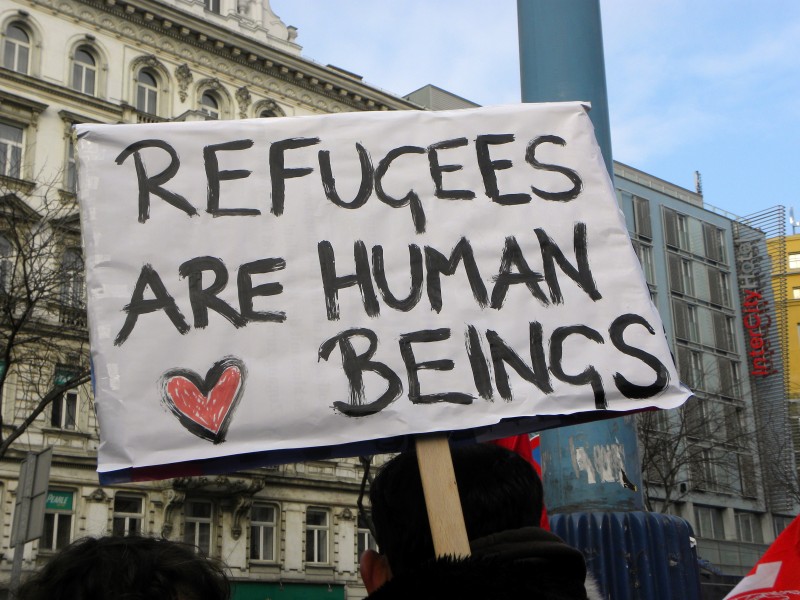 Sadly, this year is shaping up to be the year of Syrian refugees. Although the countless stories of people fleeing their war-torn country are heartbreaking, we need to look at some of those stories with a pinch of salt. Unfortunately, in some cases the world continues to be misinformed by images and video circulating online that are purportedly of the tragedy but have actually been manipulated or described inaccurately.

The reasons vary from clicktivism to politics. For instance, some European right-wing political parties are using the recent refugee crisis to further push their agenda and close the doors on Syrian refugees taking refuge in Europe. In fact, a photograph claiming to show Syrian refugees waving the ISIS flag in Germany, which is widely being shared on Facebook, is three years old and is not related to the current crisis.

Below are four stories of Syrian refugees stories you may have come across on your social media accounts, which are far from what they appear to be.

Story 1: The Italian fashion model and the Syrian immigrants’ boat

Shared on the Syrians in Belgium group on Facebook, this video above is shared with the following caption:

An Italian model is filming a video on the beach and suddenly the unexpected happened and a group of unexpected refugees arrives on the beach safely in Italy. This model will become famous for this funny and spontaneous incident which will not repeat itself. Most of them are Syrians and Palestinians. Thank God for their safety.

However, the model filming the video being shared far and wide is not Italian and the video itself is not even shot in Italy. And the refugees are neither Syrian nor Palestinian. The original video was published on July 10, 2015, on YouTube by US-based Russian model Ekaterina Juskowski with the description:

Ms. Juskowski, a Miami-based artist and a founder of the Miami Girls Foundation (www.miamigirls.org) “who migrated from Russia at age 18 as a university student – had a more compassionate take. She said, “Witnessing people starting their life anew by jumping off the boat and running into the city made my personal struggle seem rather small. As controversial as the problem of illegal immigration can be for many of us, it is important to remember that people come here in search of the better life, and it comes at a very high price of great courage, hard work, and loneliness. I got to know America as a country with a big heart. While I trust it to the U.S. government to work out the policies on improving the immigration laws, it feels natural to stay compassionate and understanding on a personal level.”

Story 2: A Syrian boy sleeping between his parents’ graves

“There’s a big chance you have seen this dramatic picture of a Syrian boy covered by a blanket sleeping between the two graves of his dead parents. It went viral after some big accounts published it [in January 2014] on Twitter,” reads Harld Doornbos Blog. There is only one problem: The picture is not from Syria, but from Saudi Arabia. Photo credit haralddoornbos blog

The blog was maybe the first to investigate the case by contacting the photographer behind this story, Abdul Aziz al Otaibi, a Saudi national, from Yanbu al Bahr city. His nephew is the boy who appears in the photo:

“Look, it’s not true at all that my picture has anything to do with Syria,” Al-Otaibi says, “I am really shocked how people have twisted my picture.”

“I love photography,” he continues over the phone, “Every artist has ideas in his head. So I had the idea to make a project whereby I show in pictures how the love of a child for his parents is irreplaceable. This love cannot be substituted by anything or anybody else, even if the parents are dead.”

On Twitter, Abdul Aziz al Otaibi shared another photograph of his nephew in January 2014, hoping to set the story straight:

YouTube user komehtap K stated that Muslim refugees, on the border between Macedonia and Greece, refused the food parcels distributed to them because they carried the Red Cross symbol, which is, according to the author, not halal. While the video is true, this information is totally false.

According to Red Cross spokesman John Aangendal Nielsen speaking to French newspaper Liberation, refugees refusing the parcels was not related to the contents, which were halal, but was a kind of protest against the police who blocked their way and kept them stranded throughout the night under the rain.

Muslim migrants in Macedonia refuse Red Cross parcels because of… the red cross
The headless chicken reaction by the leaders of the European Union regarding mass migration by hundreds of thousands of people has resulted in these so called refugees not only demanding to be allowed to go where they want to go, but insisting on subscribing to the religious bigotry they claim they are running away from.

Here on the Macedonian/Greek border Red Cross aid parcels are being refused due to them having a red cross on the box. And the left call me a bigot for questioning the veracity of these so called refugees

And on Twitter, many reacted with anger at the “ingratitude” of the refugees:

I saw a video of a load of Syrian men throwing food offered to them away because it ain't halal. They should be sent back IMO

Unbelievable and ungrateful! #Syrian #refugees in #Hungary are complaining because the food they are being given is not guaranteed as Halal.

Story 4: The photoshopped image of a Syrian mother at sea A Syrian mother trying to swim to safety carrying her toddler child. Photo gone viral (source unknown), but it isn't what it seems to be.

This photograph of a Syrian mother struggling at sea has been making the rounds online. But something is amiss. Netizens were quick to notice that the photograph was photoshopped, covering the woman's hair. Omneya Talaat tweets:

When society is only concerned with covering a woman's hair and not providing her with a dignified life, then it is a society on its way to oblivion. There is nothing to argue about here

The blog Phogotraphy asked why a doctored photograph is being used to highlight the plight of Syrian refugees:

This terrifying photograph shows Syrian refugee Rukhsan Muhammed who was rescued off the coast of Turkey in 2013 after the boat she and her son were on capsized. Without the need for an expert’s inspection it is clear that a white headscarf has been crudely applied to the photograph using digital tools.

The moment captured is one of utter despair, indeed since the photograph was taken we learned that Rukhsan had been in the water with her one year old son who was washed away and drowned by the strong currents. So why trivialise this awful situation by drawing on a headscarf to protect this poor woman’s modesty?

Does her dress matter? Phogotraphy explained:

Of course underneath any clothing is a human being, a mother who has lost her child and nearly her own life. We want to care about this person and if she lived to tell of her ordeal. Within the series of images from the Anadolu Agency we can see that Rukhsan was thankfully rescued and what is striking to us now is not a story of survival, but further insight to her clothing. We can see now, clearly that she dresses like us, The West. During rising xenophobia in Europe being prevalent surely a more effective way of realising our compassion is by showing the world we are all the same.

Refugees arriving in Europe are escaping the fate of 320,000 Syrians who have been killed back home in Syria since the start of the war in their country four years ago. They have risked it all to ensure their future and that of their children. Should they be judged for aspiring to live?