Steps On the Journey 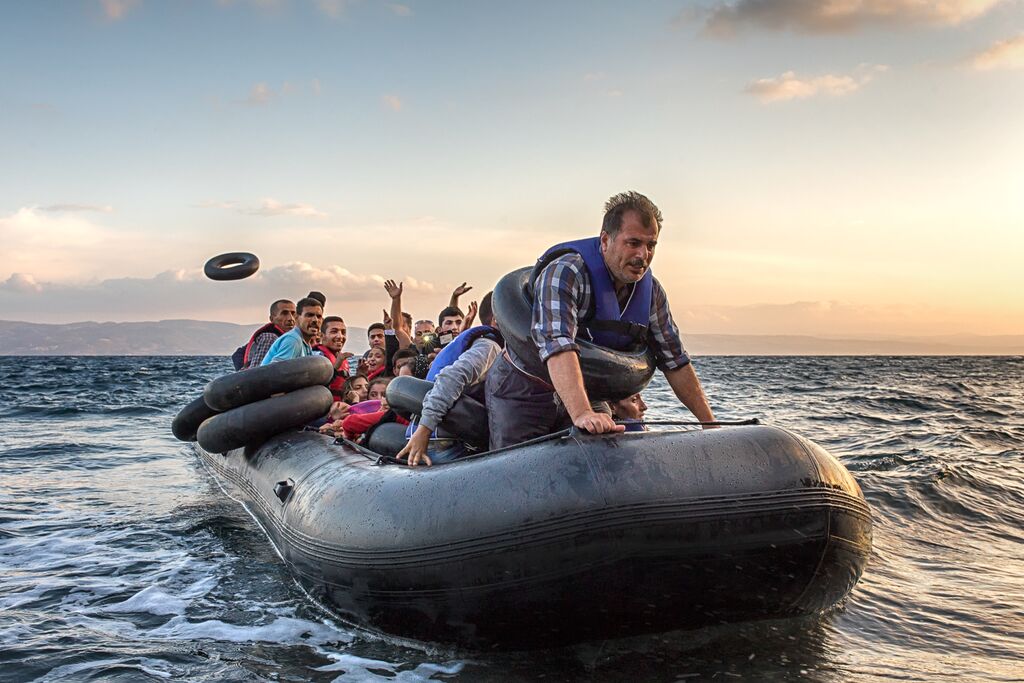 An inflatable raft full of refuge-seekers on its way to Lesvos, Greece. PHOTO: Radu Bec. Used with permission.

The coastal road of Eftalou on the island of Lesvos, Greece, is lined with olive groves, fig trees and the detritus of the daily passage of thousands of refuge-seeking women, men and children. The coastline is littered with deflated rubber dinghies, piles of life-jackets stuffed with styrofoam, sponge or dried grass, abandoned sodden outer garments, and the occasional toy or memento carried across the sea and lost in the rush to keep moving.

As the sun rises and glints off the Aegean sea, the horizon is dotted with dinghies already en route, making slow progress through the turbulent waters. Guided on to shore by volunteers, boat passengers stumble and wade through knee-deep water, clutching children, elderly people, salvaged ruck-sacks, and each other. Overwhelmed with relief, they embrace, cheer, weep, bow down in prayer or sit in shaken silence. Calls are made to reassure family members still in camps and communities in Syria, Afghanistan, Lebanon, Turkey, Eritrea, Somalia and elsewhere, that they made the crossing safely, that they’re alive, that they’re together.

Fatima, a teacher and mother of two young boys collapses on reaching shore, crying and momentarily struggling to breathe. Mahmoud, her eleven-year old son, kneels and cradles her as we loosen her head-scarf, calming her with reassurances that that they’re all safe and that he loves her. “On the dinghy, I held all of my fear inside of me so my boys wouldn’t see it,” Fatima explains later. “But they are older than their years. I hope, somewhere, that they can live the childhood that was denied to them and that I can re-build our lives”.

Ahmed sits on the rocks, his trembling legs failing him, surrounded by his grown children. Sawsan, his eldest daughter, holds his hand. Walking the six kilometres to Molyvos later, however, he revives despite the relentless heat and admires the lush agricultural fields, flowering trees and preserved ruins of a fortress in the distance. His two teenage sons had been detained and flogged in Raqqa, and when they were eventually released he decided to leave Syria—a decision, he says, that he found devastating. “There was no other option,” Ahmed says. “I raised my children to reject sectarianism and to have deep respect for all religions. We saw a brutality and inhumanity that I could no longer protect them from and I knew we had to leave”.

Lara and Haya, teenage hip-hop devotees, walk alongside us with their brothers. Their father, Ehab, is recovering from the open heart surgery he underwent the month before, a healing scar visible on his chest. He walks slowly, pausing frequently for breath, until a volunteer convinces him to accept a lift, reassuring him that his children will be safe and will follow him to the nearby rest-camp. As the group continues along the dirt road and the sun rises higher in a cloudless sky, the youngest decide to go for a swim. They jump off the rocks fully clothed and float on their backs in the now calm waters. They laugh, gesturing shyly at the sun-bathing tourists on the beach, wondering what they’re thinking, what they understand of their disparate group, thrown together by circumstance and now connected by deepening friendships as they journey together.

Canyar, a Kurdish musician from Kobane, Syria, sits and rests with his family and comrades. He has brought his instrument, a tanbur—a long-necked lute—and little else. “My music is my resistance,” he says. “I play songs to honour our fallen, those who died defending our people, and to celebrate life, our traditions and culture, too. My music is how I contribute to the struggle of my people”.

Salwaa, a compassionate, competent and multi-lingual Afghani university student in her mid-twenties, moves between groups of fellow travellers from Kabul, Kunduz and Mazar-i Sharif, assisting those who need help. She translates for a volunteer paramedic as he examines the painful feet of Karim, a Hazara school-teacher and diabetes-sufferer who has been walking for weeks with his family. He has deep tissue necrosis in both feet and will, it seems, have to undergo a double-amputation. “I couldn’t translate that,” Salwa says. “I couldn’t destroy his hopes. They will tell him the truth at the hospital, but I cannot”.

Later, outside a dusty parking lot where new arrivals wait for the infrequent buses that will take them to processing camps in Mytilene, a familiar laugh reunites us with Wissam, a Palestinian journalist and resident of Yarmouk refugee camp. Our last encounter was in 2007 in her work studio, in happier times, and we embrace and reminisce. She points to her son and brothers next to her, their clothes still damp and encrusted with sea-salt from the crossing. “Our world has been turned upside down—everything has changed in such a short space of time,” Wissam says.

Their dinghy had begun to sink when they were still far from shore and they had to throw anything that wasn’t essential overboard, including their water-logged, heavy ruck-sacks. “The seas are not only the graveyard of our bodies,” she reflects, referring to the thousands of those seeking refuge that have drowned over the past year, “but also of our memories—of our photos and belongings and the small things we brought with us to remind us of home.”

Days later, many of those we’d encountered when they first arrived are still waiting in camps in Mytilene, at the port or sleeping in the streets as they wait for the reception papers that would allow them to continue their journeys. The conditions are degrading, there is little, if any, humanitarian infrastructure in place, and each day they wait long hours at the port, enduring verbal insults and occasional baton-charges by port police. “It’s all so humiliating,” Sonia, an architectural student from near Damascus, says. “We really weren’t expecting this. We thought that if we lived through the sea crossing that that would be the hardest part of the journey completed.”

Accounts of the militarised borders still to be crossed filter back by word-of-mouth and through virtual chat groups. Marwan, one of the youths who paused to swim while his family were making the trek to Molyvos, gestures to the crowds of exhausted, patience-worn-thin fellow travelers around them at the port and says wryly, “If I knew we were hurrying only to get stuck here I would have stayed in the sea for longer and stopped to admire the views along the way”.

That night, we take Sonia and her group of fellow students to a celebration at Pikpa, a community-run solidarity camp that provides rest and refuge to the ill, injured and particularly vulnerable amongst those seeking asylum. Efi, a co-ordinator and tireless volunteer, dances surrounded by a group of little girls, all trying to hold her hands and attention. “We learn from their strength and we try to create a community that gives us all some dignity,” she says. A group of musicians, activists and volunteers from the Welcome to Europe network sing songs of border-less solidarity, of belonging, of ferries not Frontex, and of welcome.

Sonia sits on the ground amongst the children and their parents, her tensed shoulders relaxing and the weight of the anticipation of the days and weeks to come temporarily lifted. Mohammed, a thirteen- year-old from Aleppo, gets up and takes the mike. Under a beautiful night sky, surrounded by survivors, he raps about resilience and endurance and their long journeys. His audience joins in and, for a moment, his face is incandescent.

Caoimhe Butterly is an Irish organiser, migrant justice activist and post-graduate student. She has spent fourteen years working with social movements and community development projects in Latin America, the Arab world and elsewhere.