Solar Power Is Booming in India, But Will It Reach Those Who Need It Most? 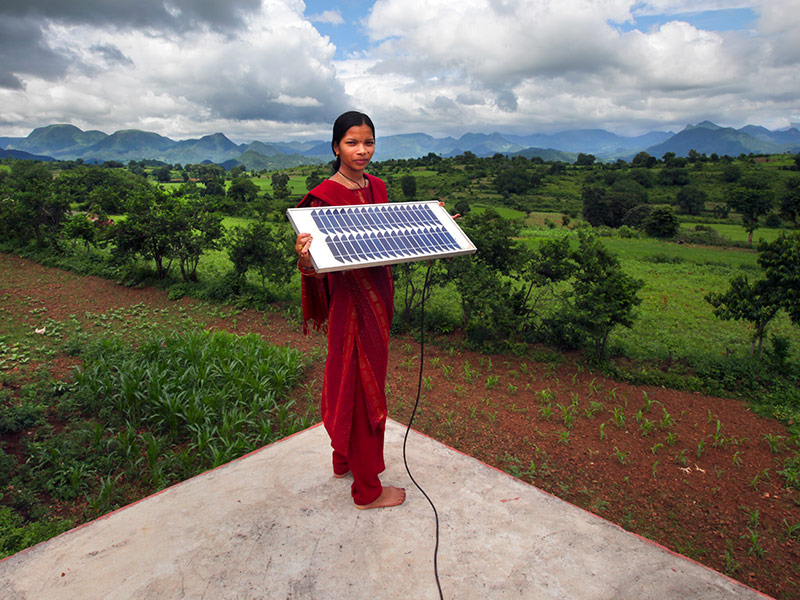 This post by Didem Tali was originally published on Ensia.com, a magazine that highlights international environmental solutions in action, and is republished here as part of a content-sharing agreement.

The sun is shining on India, and India is poised to take advantage of it, with massive investments in solar energy facilities to help meet the needs of a population that is expected to grow to make it the planet’s most populous nation by 2022. But will the power go to the people who need it most?

With its large land mass and tropical location, many experts consider the country particularly suitable for solar power. In fact, a recent study by Deloitte and the Confederation of Indian Industry estimated India’s solar power potential at 749 gigawatts — nearly three times the country’s entire installed electrical capacity in 2012 — and reported that not even 1 percent of this potential is currently tapped.

The Indian government is making aggressive moves to accelerate the country’s solar energy supply. According to Bridge to India, a Delhi-based solar energy firm, India’s solar industry is expected to grow 250 percent this year, putting the country on track to become one of the top five solar countries globally. Indian Prime Minister Narendra Modi’s government has just approved a plan to develop 50 solar cities. The world’s first airport that runs entirely on solar power was recently built in the southwestern Indian state of Cochin. And India is soon to have the world’s largest solar power station. Describing solar energy as the “ultimate solution,” Modi pledged to give all Indians access to electricity and called on the country’s scientists to develop more efficient solar energy equipment.

‘India’s opportunity of a lifetime’

“Solar power is India’s opportunity of a lifetime. It has the power to address not only India’s development problems, but it could also be a game changer for global climate change,” says Tobias Engelmeier, director of Bridge to India. “Reaching a capacity of 100 gigawatts in 15 years is realistic,” he says.

According to the Delhi-based think tank The Energy and Resources Institute, 300 million people in India have no access to electricity. Solar power could make it easier for schoolchildren to do homework after dark, help residents connect to the world through mobile phones and more. However, Engelmeier says, it will be a challenge for solar power to filter to the urban poor: 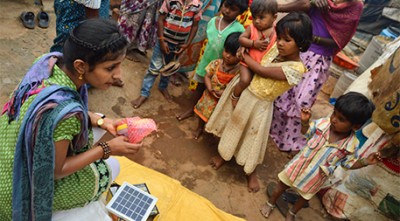 Decisions regarding the solar power investments are very politically driven and erratic. Even those who have access to electricity in cities regularly suffer from power cuts. Especially without centralized power systems and with the unpredictable nature of politics, it’s difficult to anticipate what will happen.

That said, many initiatives intend to make India’s urban poor benefit from the solar power boom. Through the project “Lighting a Billion Lives,” The Energy and Resources Institute has already illuminated more than half a million households not just in India, but also in 11 other developing countries. Similarly, the Small-Scale Sustainable Infrastructure Development Fund provides financial, technical, and business support to small enterprises that provide solar infrastructure. Established in 2012, the Australia- and India-based social business Pollinate Energy has sold micro solar grids in more than 1,000 communities.

“It will be the [non-profit] sector and the individuals from communities who will leverage the solar power boom to slums,” says Katerina Kimmorley, founding director of Pollinate Energy.

However, even at subsidized rates offered by social businesses such as Pollinate Energy, a solar power unit costs Rs. 5500 (US$83), whereas a daily wage of a construction worker can be as low as Rs. 200 (US$3). Many urban dwellers work in volatile sectors, such as construction, where jobs are cut during the rainy season, which means many households would likely find it difficult to afford such solutions.

Not only that, but electricity is not the energy upgrade India’s poorest residents need most. By far the greatest use of energy in slums is for cooking food and sterilizing water — a need currently met by biomass fuels, which pollute the air and cause health problems, and which cannot easily be met by micro-solar photovoltaics because of the relatively small amount of electricity they produce. Nevertheless, micro-solar grids can benefit households to a certain degree, especially when it comes to satisfying smaller everyday needs, such as illuminating houses and charging mobile phones.

There’s little doubt that it will take many years, if not decades, for consumer demand and rising market competition to make solar power affordable enough for all. However, with the right steps, policies, and the heavy involvement of the nonprofit sector, solar may indeed play an important role in helping India’s 300 million current power-less people gain access to electricity.

Didem Tali is a freelance multimedia journalist specializing into international development affairs. She reports about economic affairs, gender, and the environment from Africa, Asia, Europe, and the Middle East. She holds a Master’s Degree in media, communication, and development from the London School of Economics. She tweets from @didem_tali.