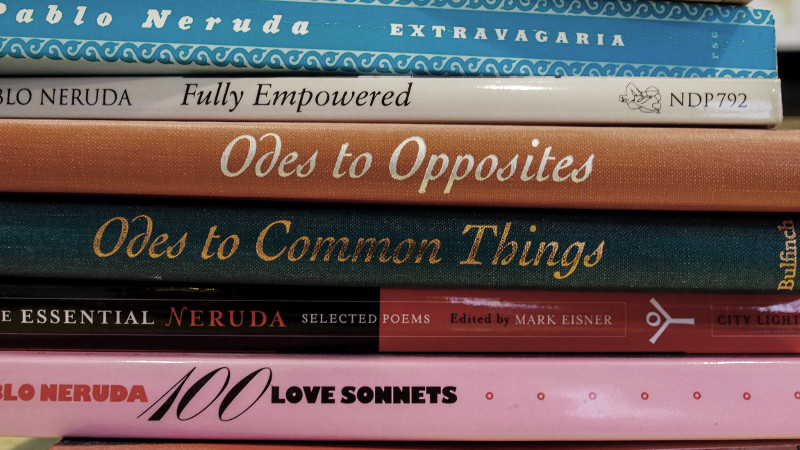 Chilean artist Carla Moreno's depiction of the country's famed poet Pablo Neruda, accompanied by a rereading of the text he wrote about a possibly non-consensual encounter he had as a young man, has sparked controversy and debate about the culture of rape in a machista (male chauvinist) society.

The latest installment in a series of lurid portraits reminiscent of pulp fiction book covers portrays the celebrated Literature Nobel Laureate with a dripping coil of excrement on his head, under the banner “Progressive Male Chauvinist.” Purporting to be a new edition of the author's memoir “I Confess That I Have Lived” (1974, posthumous), Moreno's version reads “I Confess That I Have Raped,” followed by the subtitle “a poor, black, Tamil, Pariah caste woman while I was Consul in Colombo”.

Chilean artist Carla Moreno's portrait of Pablo Neruda “I Confess That I Have Raped,” followed by the subtitle “a poor, black, Tamil, Pariah caste woman while I was Consul in Colombo.”

Moreno annotates her work with a deconstruction of a passage written by Neruda describing an experience he had while he was Chilean consul in Sri Lanka (then Ceylon) during the 1920s. Developing an intense attraction for the woman who cleaned his toilet every morning, he recounts how he finally prevailed and had sex with her, despite the fact that she never once returned his entreaties.

One morning, I decided to go for all, and I grabbed her forcefully by the wrist and looked her in the face. There was no language I could speak to her. She allowed herself to be led by me unsmiling and soon was naked upon my bed. Her extremely slender waist, full hips, the overflowing cups of her breasts, made her exactly like the thousands year old sculptures in the south of India. The encounter was like that of a man and a statue. She kept her eyes open throughout, unmoved. She was right to have contempt for me. The experience was not repeated.

Neruda notes his position of authority over the woman and how he had exoticised and objectified her. According to Moreno, he refers to her as “Not a person, not an equal.” As she puts it:

So naturalized is the culture of rape and racism that a white, powerful man can include an account of rape as just one more anecdote in his memoirs, and NOTHING happens.

In an article in ElDesconcierto, Vanessa Vargas Rojas asserts:

Converted into a cultural reference for Chile to the world, the figure of the poet has not been the subject of interrogation in terms of these types of episodes in his life, in stark contrast to what has happened to great female artists from Chile like Violeta Parra or Gabriela Mistral, who are constantly criticised for their relationships with motherhood and sexuality.

Neruda is widely considered one of the greatest poets of the 20th century. His work is a part of the cultural heritage of Chile and Latin America. He also combined his writing with political activities. In addition to his diplomatic career, in 1945 he was elected to the Senate and joined the Communist Party. Three years later, when the Chilean government moved to the right with president Gabriel González Videla and declared communism illegal, Neruda was persecuted in his country and forced into exile for a time. The author of Twenty Love Poems and a Song of Despair, he died on September 23, 1973, in Santiago, Chile.

For fans of his famous poems, the revelation has been shocking:

How do you overlook the rape part of Neruda's memoir? All this birthday adulation. So many feelings.