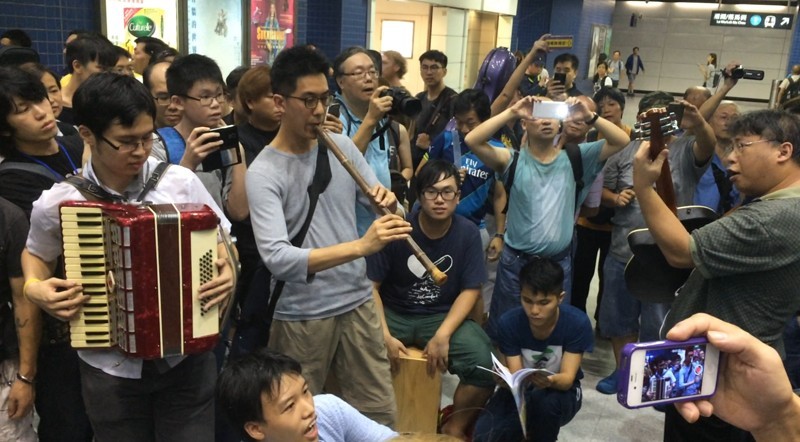 This post was written by Kris Cheng and originally published on Hong Kong Free Press on October 4, 2015. The edited version below is republished on Global Voices under a partnership agreement.

More than a hundred people joined a protest at Tai Wai metro station on Saturday evening, October 3, against the ‘selective’ enforcement of the Mass Transit Railway's (MTR) bylaws regarding luggage.

Demonstrators wielding guitars, accordions, trombones and bagpipes, were responding to a Facebook campaign urging citizens to take their musical instruments on to the MTR system.

It followed an incident in which a Baptist University music student was warned by MTR staff for bringing his cello into Tai Wai station last month. Some accuse staff of harassing musicians while turning a blind eye to oversized luggage carried by tourists and parallel traders–mainland Chinese who buy up Hong Kong goods and carry them back over the border to resell.

‘Stand up against injustice’

Mavis Lung Man-wai, a yangqin teacher who started the Facebook campaign, said that she was happy with the protest turnout.

I feel we have achieved our goal, because we have received a lot of media exposure. No matter whether MTR’s response can meet our demands or not, we have done what we can do.

Although the MTR Corporation promised a public consultation on luggage policy, the company did not respond to Lung.

MTR didn’t talk to me at all. I’ll send emails to them in my personal capacity to ask for exemption for musical instruments [from warnings and fines]… I hope musical organisations such as the Hong Kong Chinese Orchestra can do more, art organisations like the Arts Development Council, and universities that have a music department, as students are the ones that need to travel by MTR.

Lung added that she would not usually carry her yangqin onto the MTR, but she started the campaign “to stand up against injustice.” 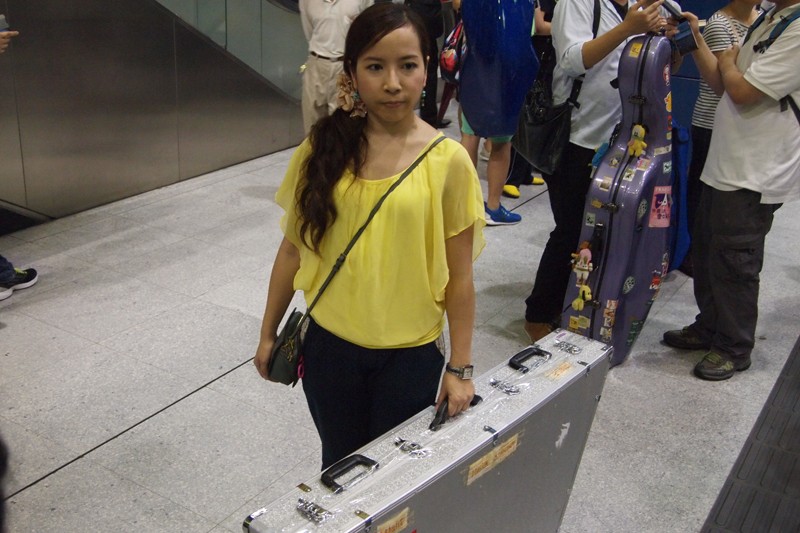 Around half of the protesters were from localist groups that promote values and culture of Hong Kong people such as Hong Kong Localism Power, which claimed the MTR did not enforce their own bylaws on parallel traders, yet picked on local people.

One of the protest placards read, “[MTR] Prosecutes HK Citizens only but not Chinese Smugglers–No [to] MTR Corruptions”, while another read, “MTR staff take bribes and assist smugglers evading taxes.”

Most of these protesters did not bring musical instruments but chanted slogans against the MTR company.

I live in Lohas Park, I have to take MTR with my cello. I have had it for ten years and it was fine before – it’s not reasonable to give warnings to people with musical instruments now. It’s disturbing many students, but they have no choice. 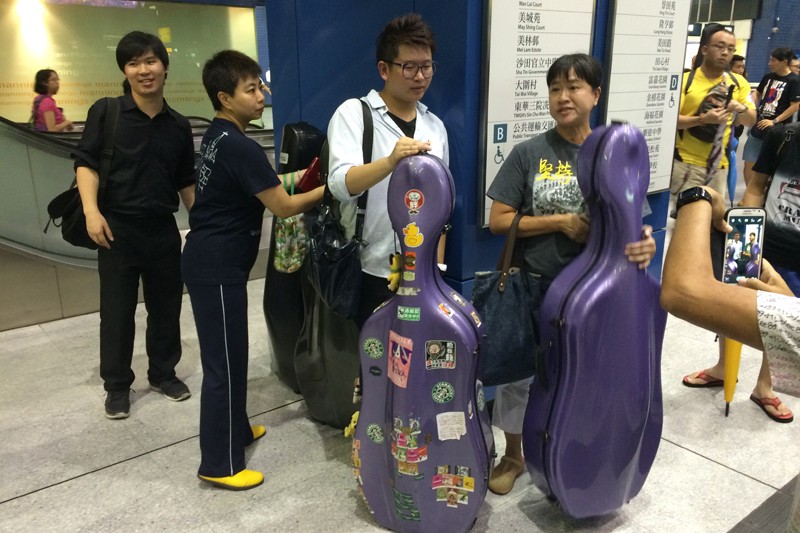 ‘It would be nice if there were special carriages’

Patrick Brousseau, a teacher wearing a kilt, drew lots of attention with his bagpipes. Brousseau had an alternative suggestion for the MTRC:

Considering that the first and last cars usually have bigger open spaces, the MTR [can] just [ask] people with oversize baggage to go to those cars. I think most people would say ‘yeah, I can do that’, right? It would be nice if there were special carriages, because then it would help transport bicycles on the train. But also I don’t think that the smuggling problem is going to go away very soon […] If the MTR actually introduce baggage cars… for people transporting goods to China… they can make a ton of money, and kill two birds with one stone.

Some protesters played and sang popular Cantonese songs such as Beyond’s ‘Under a Vast Sky’, a song often heard at pro-democracy protests.

‘I am prepared to be fined here’

Another demonstrator painted the station floor in protest of the MTRC “disturbing livelihoods and suppressing art”. He cleaned the floor before leaving.

Painter Perry Dino, who is often seen at protests, said:

MTR should give people a chance to bring musical instruments, as some are teaching music for a living and don’t have money to take taxis or vans. 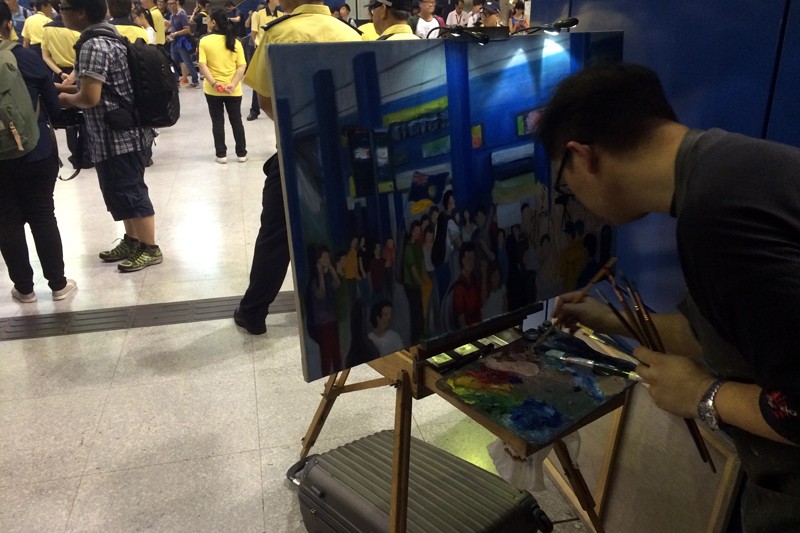 Dino added that his paint set exceeded MTR luggage guidelines when expanded. “I am prepared to be fined here,” he said.

Mr Lee, who brought a symbolic yellow umbrella instead of an instrument, said:

Hong Kong people should protect children’s right to learn music. In the past it was allowed to carry musical instruments into stations. Why not now? 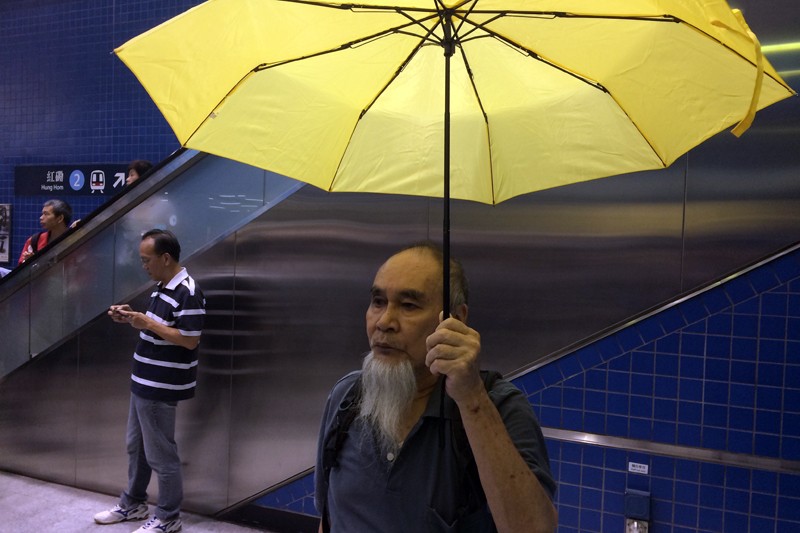 Mr Lee with his yellow umbrella. Photo from HKFP.