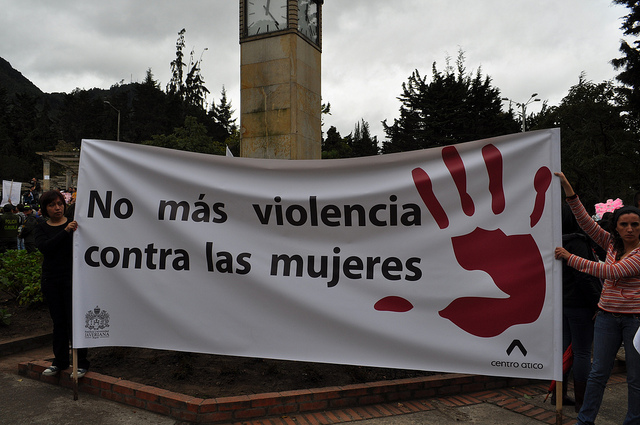 Photo of a banner at a protest condemning violence against women in Colombia, taken from the ‘Marcha Patriótica’ Flickr account, under a Creative Commons license.

Two events in the last few weeks have left Colombians wondering if their country is still hostile towards women: the murder of journalist Flor Alba Núñez, and the announcement of possible charges against actress and singer Carolina Sabino for allegedly having an abortion.

Following the killing of the 25-year old journalist, who died from a gunshot wound to the head on September 10, 2015, Colombian trade unions immediately took to the streets to express their repulsion at what had taken place.

The Foundation for Freedom of the Press (Fundacion para la Libertad de Prensa) called on the Colombian public prosecution to act with diligence in this case, while the non-profit organization Reporters Without Borders encouraged people to be more aware of online threats and to take them seriously. Núñez had received threats online due to her reporting.

The organisation concluded their statement with some quite disturbing figures:

Colombia, the third most most dangerous country in the American continent for labour unionists, is in 128th place out of 180 countries in the Reporters Without Borders’ 2015 World Press Freedom Index.

The blog Journalism in the Americas looked at the cases of murders committed in the country this year:

Luis Carlos Peralta Cuellar, director and owner of radio station Linda Stereo, was shot on February 14 in Doncello in the department of Caquetá.  Edgar Quintero, journalist at Radio Luna, was fatally shot by an unknown assailant on March 2 in Palmira in the southwest Colombian department of Valle del Cauca.

CPJ reports that 46 journalists have been killed in Colombia since 1992. The country ranks 8th on the organization's 2014 Global Impunity Index for murders of journalists.

Journalists have come out in protest against the death of a fellow journalist. Héctor Abad Faciolince condemned her murder and tweeted a link to a graphic YouTube video of what appears to be closed-circuit television footage showing the moment of Núñez's death, posted on September 11, 2015:

It is in cold blood and with indifference that the Colombian broadcast journalist Flor Alba Núñez was murdered.

Others made a stand:

‘Attacked my dignity and my rights as a woman’

The day after Núñez's murder, the Office of the Attorney General requested a hearing to press charges against Carolina Sabino for the alleged crime of abortion. The case came to be known when a phone call between Sabino and her sister, the actress Lina Luna, was intercepted as part of an investigation into Luna's former partner.

Her former partner, Andrés Sepúlveda, was a hacker who was sentenced last April to 10 years in prison for spying on negotiators of the peace process between the Colombian government and the militant group FARC.

The same day, Carolina publicly voiced her disapproval on her Twitter account of Attorney General for publishing private information without her consent. In doing so, authorities not only violated her privacy but also her dignity:

Press release for the public's consideration
Bogotá, 11 September 2015
Given the information circulating in the media I would like to say the following:
1. It surprises me that such a personal and painful episode would be put on display for all Colombians to see without consideration for my family, mainly my son Tomás, who doesn't understand the reasoning behind this situation. This hasn't just violated my privacy, but has also attacked my dignity and my rights as a woman, as a person and as a citizen.
2. I have yet to be officially notified that I have to appear at the hearing, to which the Office of the Attorney General will supposedly summon me to file charges against me.
3. I appreciate everyone who has shown me their solidarity.
Carolina Sabino

In Colombia, the law states that abortion is legal only in the following cases: if the pregnancy poses a risk to the woman's health, if the fetus has a deformity, or if the pregnancy occurred as the result of rape.

However, the incident surrounding Sabino's abortion has opened up a debate in Colombia and generated a wave of widespread support for the actress, particularly because of the way in which the news had come to light. Due to public outrage at the way in which the case had been handled, the attorney general revoked the request for a hearing three days later.

These are just a few examples of the many messages of solidarity on social media that Sabino received:

Accusing and persecuting women for making autonomous choices about their bodies is old-fashioned and ridiculous. My solidarity is with Carolina Sabino

Respect the privacy of Carolina Sabino and her reproductive freedom. Don’t use her as a scapegoat just because she is famous

All of my solidarity is with the actress Carolina Sabino. She deserves to have her privacy respected and to be presumed innocent

The attorney general's attack on Sabino by leaking this private story to the media is without a doubt a violation of privacy.

And others like Gustavo Bolivar agreed on the importance of this issue:

There is one thing that we cannot allow: that the powerful ruling clique intrude into one's private life. Today it is Carolina Sabino, tomorrow it could be you #Respect

Violence against women in Colombia

It's not the first time that Eduardo Montealegre, the attorney general of Colombia, has been involved in a controversial case related to women. Earlier in 2015, Montealegre intervened and ordered the re-arrest of former paramilitary Alejandro Cárdenas Orozco, who was a suspect in the kidnapping and rape of journalist Jineth Bedoya 15 years ago, following a prosecutor's decision to end the investigation and release him. The case remains unresolved.

Regarding the accusation against Sabino, Montealegre maintained that he knew nothing about the incident. Hopefully, he will succeed in bringing the perpetrators of Flor Alba Núñez's murder to justice.

Juan Manuel Santos, the Colombian president, enacted a law this year that classifies femicide as a separate crime with a maximum punishment of 41 years in prison. A report released by the Economic Commission for Latin America revealed that in 2014, 88 women were murdered by their partners or ex-partners in Colombia.