Belarusians Protest Against Russian Military Bases Inside Their Borders 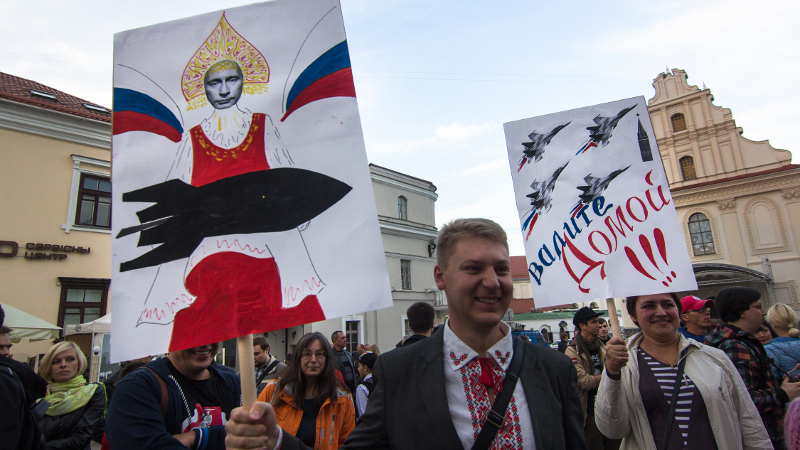 A young man in a traditional Belarusian t-shirt holds a poster against Putin’s policies of military expansion in front of a woman with a poster that reads “Fly Home!” at a protest over locating Russian military airbases in Belarus. Photo by Alyaksey Stalyarou for Demotix.

The October 4th protest rally was the third one to gather citizens opposing the alleged deployment of a Russian military aviation base in the Belarusian city of Babruysk. However, the event came with mixed messages: themes included not only the military presence of Russia in Belarus, but also the fairness of the coming elections (questionable) and the unfavorable political climate for any opposition forces in the country (a recurring issue).

About five hundred citizens, armed with flags and posters, gathered in the center of Minsk on Sunday evening. Signatures under the petition against a Russian base were collected. Besides the military base as a point of contention, the protesters seemed to be generally disposed to complain about Russian intervention, and some even expressed support for their closest neighbor, Ukraine.

According to a report from Charter97, Opposition figure Mikalai Statkevich pointed out that “as such actions had not been held in Minsk for five years, the fact of its holding was something anyway.” Yury Hubarevich, Deputy Chairman of the movement ‘For Freedom!’ insisted that “hundreds of thousands of Belarusians would take to the streets” should a Russian military base actually be deployed in Belarus.

No bases—no war! (poster: “A Russian military base makes us a target!”)

He even wrote it in Russian, so the “neighbor” would understand:) I don't know who this guy is, but I support him. (poster: “Shove those bases up your a**!”)

Online, the protest was paralleled with occasional Twitter storms using the hashtag #noRussianBaseinBelarus, with social media users expressing their views on the matter. The hashtag trended in Belarus, especially on the day of the rally.

I support any peaceful cooperation but not this violation of the Constitution. #noRussianBaseinBelarus

That is not a good idea to put russian aviation base in Belarus, so #noRussianBaseinBelarus

I don't want Gomel to turn into Donetsk!

Eventually, the police did show up and wrote up a protocol for the rally as an unsanctioned mass event, taking down the names of the opposition leaders who had organized the demonstration.

The policemen wrote up a protocol and embedded themselves in front of the speakers.

The participants of the rally adopted a resolution that would be sent to the Belarusian government with a show of hands. Furthermore, a new movement ‘For the statehood and independence of Belarus’ was established at the meeting, also with a show of hands from those present. Poet and opposition figure Uladzimir Nyaklyayeu was elected Chairman of the movement.

The anti-military base protest is likely to be one of the few public expressions of dissent that will be allowed to occur before the coming election in Belarus, widely seen as pre-destined to be won by incumbent president Alyaksandr Lukashenka. Previous elections have seen mass protests and harsh crackdowns, with many opposition leaders arrested and jailed.