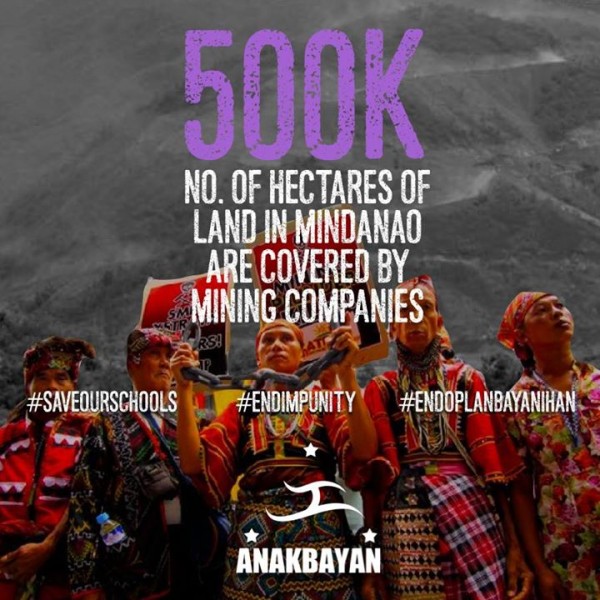 “Oplan Bayanihan [a military counterinsurgency program] pushes Lumads to evacuate their lands, but also paves the way for corporations to take hold of the land, and use the Armed Forces of the Philippines as their own security force as they plunder and suck the Earth of its natural elements.” Image and caption by Anakbayan USA.

Reacting to reports that paramilitary activities and mining operations are displacing Lumad tribes, many Filipinos have called for urgent government action to stop the violence against the indigenous peoples. Lumad is a collective term referring to the indigenous tribes in Mindanao, the Philippines’ second biggest island located in the southern part of the country.

Lumad leaders from Surigao province reported that paramilitary groups have attacked their schools and communities, forcing more than 2,000 people to leave their homes in the mountains and seek shelter in the city center. Many came from Lumad communities which have actively resisted the entry of mining companies.

The National Commission for Culture and the Arts (NCCA), a government agency, described the violence against the Lumad as an attack on Philippine culture:

The NCCA recognizes these indigenous peoples and their leaders as the core and the backbone of the country’s intangible cultural heritage. They are the bearers of our unique artistic traditions. Their murder is the murder of our peoples’ soul. As the living transmitters of time-tested knowledge systems, skills and practices, to wound them is to damage the cultural basis for the sustainable development of our nation.

For several days in September, the Twitter hashtag #StopLumadKillings‬‬ trended in the Philippines when Filipino netizens turned to social media to express their solidarity with the displaced Lumad. Below are some photos and memes showing support for the Lumad: 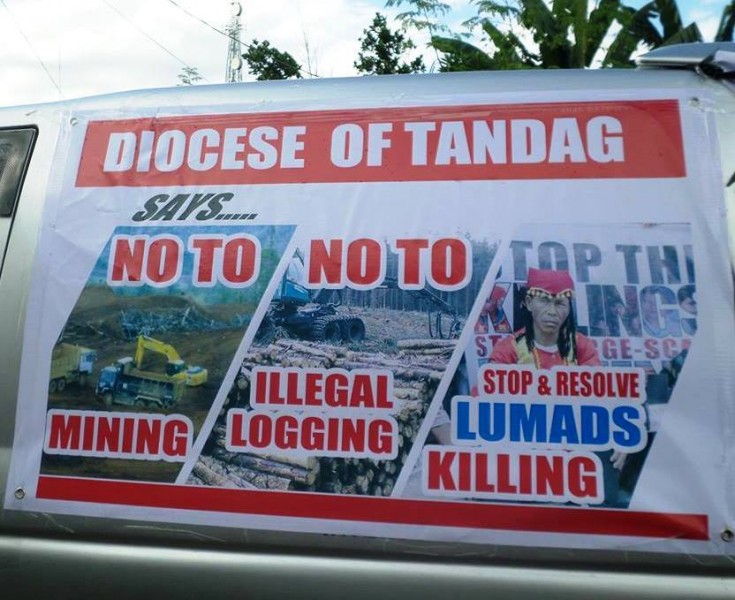 The banner reflects the stand of the Catholic Church in Tandag City where more than 2,000 Lumad evacuees have sought shelter. Photo shared on Facebook by Manassas Benedict L. Serrano. 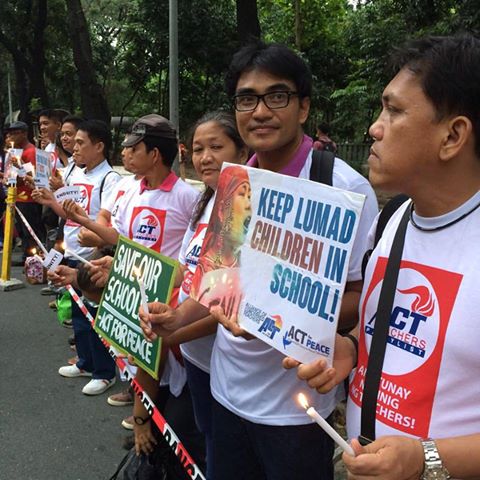 Teachers in Manila join call for the protection of the Lumad. Photo from the Facebook page of Carl Marc Ramota. 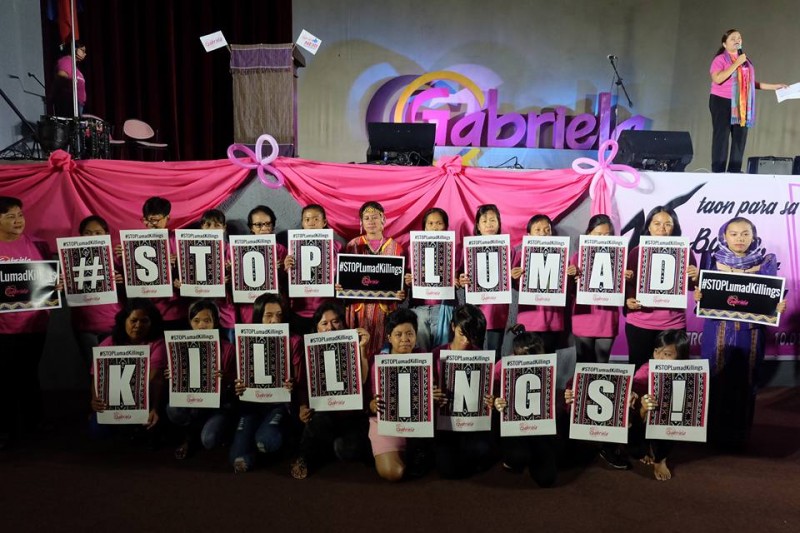 Women activists in Manila show support for the Lumad. Photo from the Facebook page of Tudla 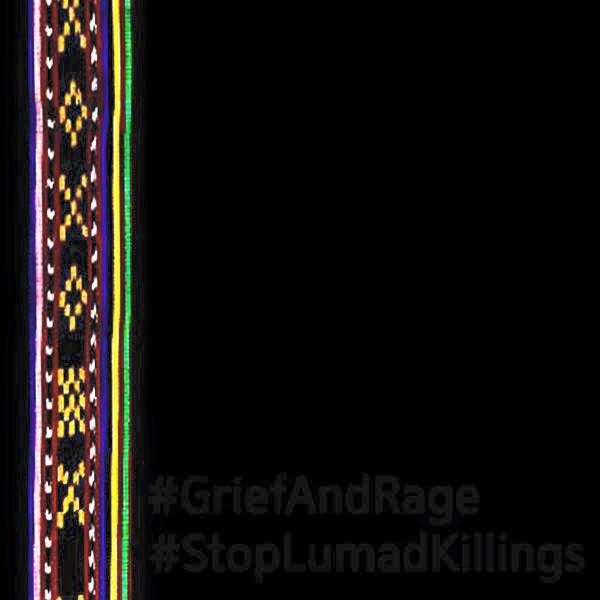 Facebook users were asked to share this profile photo created by human rights groups in support of the Lumad.

The #StopLumadKillings campaign has also reached other countries. Below are photos showing international solidarity for the Lumad: 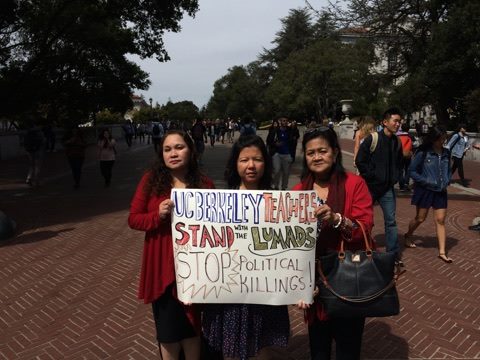 Filipino teachers in University of California Berkeley show support for the Lumad. Photo from the Facebook page of Joi Barrios-Leblanc 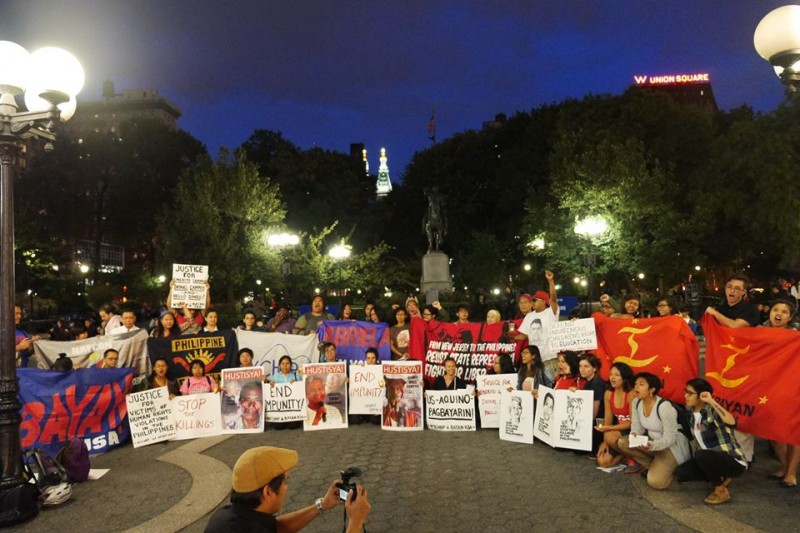 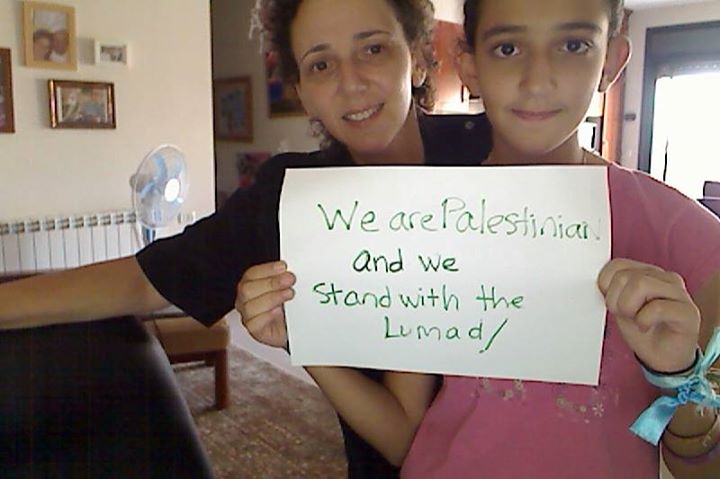 Solidarity from a Palestinian family. Photo shared on Facebook by Mark Moreno Pascual 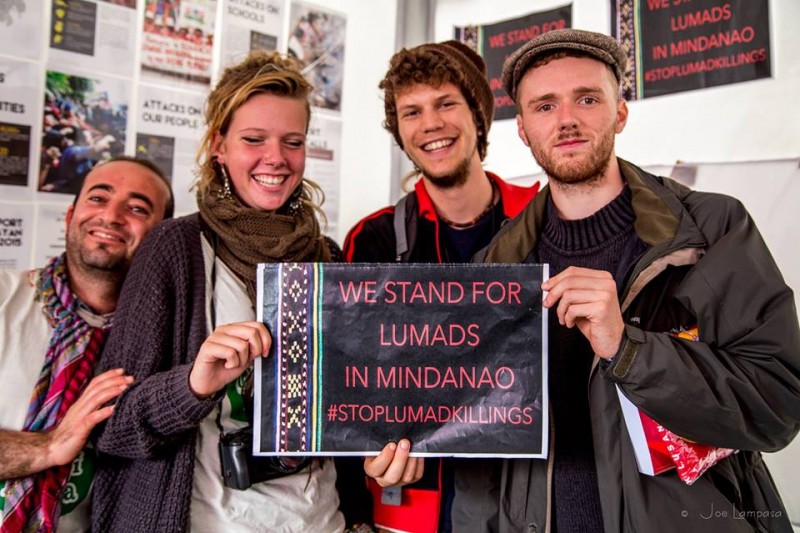 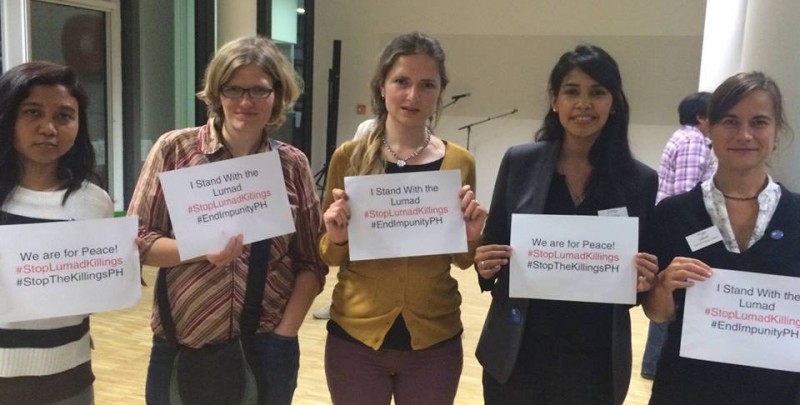 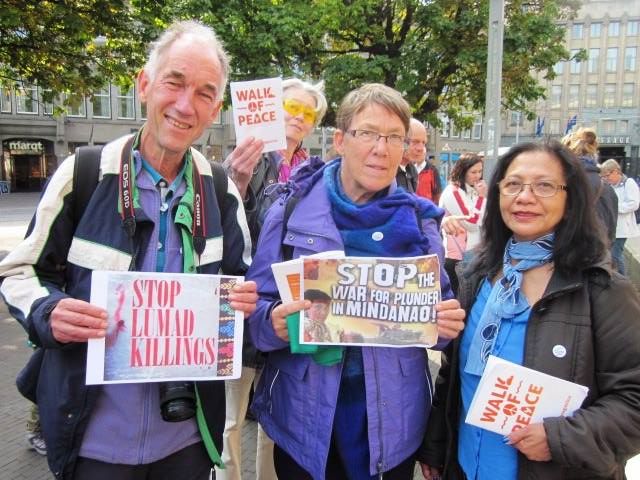 Activists in the Netherlands show support for the Lumad. Photo from the Facebook page of Marlon Toledo Lacsamana

‪The United Nations Special Rapporteurs on the rights of indigenous peoples, Victoria Tauli-Corpuz, and on the situation of human rights defenders, Michel Forst urged the military to end its occupation of some tribal schools:‬

Military occupation of civilian institutions and killing of civilians, particularly in places such as schools which should remain safe havens for children from this type of violence, are unacceptable, deplorable and contrary to international human rights and international humanitarian standards