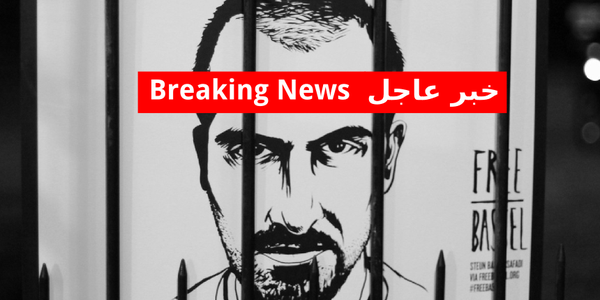 The FreeBassel poster from @freebassel on Twitter. Bassel Safadi has been imprisoned in Syria for almost four years and friends and activists fear for his life after he was transferred from his prison today to an unknown location

Activists are calling upon the Syrian government to immediately release imprisoned Syrian-Palestinian software engineer Bassel Khartabil, also known as Bassel Safadi, after he was moved from his prison to an unknown location earlier today.

Safadi, who has been in prison for almost four years, is also a well-known open-source software developer. He is a Creative Commons leader in Syria and active in projects like Mozilla Firefox and Wikipedia, and is credited with opening up the Syrian Internet and extending online access and knowledge to the public. According to the European Parliament, his detention is part of Syrian government efforts to restrict access to online communities and stifle freedom of expression in the country.

According to a Facebook page set up by supporters calling for his release:

Bassel was transferred from Adra prison to an unknown location after a patrol, whose affiliation is not known, came to him and asked him to gather his things. It is expected that he has been transferred to the civil court headquarters at the Military Police in Al Qaboun area. We are worried and fear for Bassel after his whereabouts are unknown again

Khartabil was arrested on March 15, 2012, on the first anniversary of the start of the Syrian revolution. He was interrogated and tortured for five days by Military Branch 215. He was then transferred to the Interrogation Division Branch 248 and detained incommunicado for nine months. On December 9, 2012, Khartabil was brought before a military prosecutor without an attorney present, and charged with “spying for an enemy State”. He was then sent to the Adra Prison in Damascus, where he has been held, until today. The Electronic Frontier Foundation (EFF) notes that:

It was Bassel's visibility as a technologist and activist that made him a target for detention.

An online petition, initiated by friend and campaigner Mohamed Najem, is available at Change.org calling for Khartabil's immediate release. Please click the link to sign it.

Friend and freedom of speech campaigner Jillian C. York, who is also EFF Director for International Freedom of Expression, lends her support to the drive. She tweets:

My friend Bassel Safadi has been transferred from Adra prison in Syria, we don't know where-Please sign our petition https://t.co/sER4lWTXjB

We know petitions won't convince Syria (or anyone) but it's all we've got. Please help get the word out so Bassel stays safe.