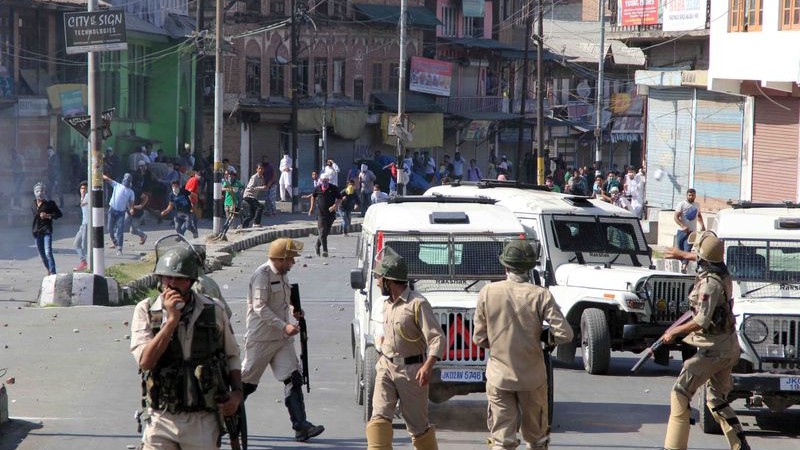 Hundreds of Kashmiris clash with police after Friday prayers to protest against banning cow slaughter and the sale of beef by a division bench of Jammu and Kashmir high court in the Indian-controlled area of Kashmir. Image by Umer Aisf. Copyright Demotix (11/9/2015)

Communal attempts to banish the consumption or procurement of beef in India for religious reasons have taken a deadly turn. A mob consisting of 200 Hindu men lynched a Muslim man in the outskirts of the Indian capital of Delhi after rumors spread that his family was eating and storing beef.

Mohammad Akhlaq, 50, was beaten to death, and his 22-year-old son was severely injured. The two were dragged from their sleep at home in Dadri in the state of Uttar Pradesh after it was reportedly announced over the local temple loudspeaker about him possessing beef.

Nearly 80% of the country is Hindu, and many adherents abstain from eating beef. That leaves a sizable minority of 250 million Indians, including about 140 million Muslims, who do eat beef. Different states have different laws regulating slaughter and consumption. Hindu nationalists have pushed for tougher dietary restrictions nationwide with renewed fervor following the landslide victory of Prime Minister Narendra Modi's Bharatiya Janata Party in 2014.

Blogger Saurabh Singh offered up a pertinent question following Akhlaq's death: “Will anyone in India ever dare to kill a beef-eating Hindu?”.

Was Akhlaq killed for being a Muslim? In today's India, can a fanatic mob get away with killing a beef-eating person, even if he is a Hindu?

We would be kidding ourselves if we think that's the case. No Hindu can ever be killed for eating cow meat in India. Muslims are always the usual suspects. Sadly, they have become the “others” in a country with the second largest Muslim population in the world.

There is a large number of beef-eating Hindus in India, but no one deems them as others, of course. If they choose to eat the meat, they are neither bullied nor looked down upon.

‘Throw the book at the murderers’

Social media was flooded with outrage from Indians at the news of the violence. Journalist Shivam VJ commented in Twitter:

If they think you killed a cow they will kill you because human life has no value for these Hindus http://t.co/ftVFNjOh8l

Dadri #lynching is morally repugnant. We need to condemn it without ifs and buts and strange detours into Gandhi's views on cow slaughter.

Harini Calamur urged for tough treatment of those involved:

why do mobs go on rampage – because they think they can get away with it. Throw the book at the murderers http://t.co/AvTik639oK #dadri

Six people have so far been arrested in connection with the killing.

Since the mob beating, certain members of the Bharatiya Janata Party have resorted to trivializing the issue to victim-blaming. A former Legislative Assembly member from the party called the accused “excited innocent children“.

For the BJP, murderers have always been ‘excited innocent children.’ Which explains why murderers are now their MPs: https://t.co/U3FtytgJNX

At the same time, Uttar Pradesh state police were criticized for not picking up the bloody clothing that Akhlaq and his son were wearing as evidence.

Suchitra Krishnamoorthi noted on Twitter the strange contrast between this hostile attitude toward consumption of beef and the fact that India is the world's largest exporter of the stuff:

Some get rich by exporting #beef, some die for consuming it?. WHat warped & perverse nationalism is this ban fanning http://t.co/JMfGQi1L7l

‘Playing up extremes on both sides’

Banning meat has a long history in India. In August 2015, slaughterhouses in two neighborhoods in Mumbai, capital of Indian state of Maharashtra, were instructed to shut down for four and nine days respectively by the local municipality so that the local Jains, a small minority in India who are vegetarians, can practice a religious festival.

Social media users reacted strongly both in for and against under trending the hashtag #MeatBan on Twitter at the time. The annual temporary ban has been put into place since 1964, but received increased focus this year because of a controversial blanket ban placed on cattle slaughter in Maharashtra in March 2015.

Historically, banning the slaughtering of animals dates back to 16th century. Mughal emporer Akbar (1542-1605 CE) ordered people to abstain from butchering and selling of meat to respect the religious sentiments of the Jains.

Offstumped at Niti Central broke down the beef politics in India and how the different sides of the political spectrum along with the media all have it wrong:

The Right is wrong for moving the debate on “Cow Protection” from the personal domain based on personal morality and religious observances to the domain of the State, something which didn’t happen even during [ancient Indian jurist] Kautilya’s time.

The Left is wrong in questioning the legitimate Right of the State to legislate on matters that happen in public spaces, a Right which is not unique to India and a Right that is routinely exercised in liberal democracies of the West.

The media is wrong for having distorted the public debate by raising the bogey of personal freedoms when in fact there were no consumption bans. Rather than inform and clarify the media has vitiated the debate by playing up extremes on both sides by repeating crude generalisations and peddling vulgar oversimplifications.